Settled in the 1890’s before Miami was even incorporated, Overtown, originally "Colortown", is the historic heart of the city’s black community. In the first half of the twentieth century, Overtown was a port of entry for black immigrants from Cuba, Barbados, Haiti, Trinidad & Tobago, and Jamaica. Famous jazz entertainers such as Count Basie, Ella Fitzgerald, Louis Armstrong, Cab Calloway, Josephine Baker, Nat King Cole, Aretha Franklin would perform in local venues like the Lyric Theater and stay in nearby hotels after playing at Miami Beach. By the 1950's, the neighborhood's population peaked and was considered a cultural mecca by all who knew it.

By 1965, half of Overtown’s population had been displaced to make way for the construction of a major interchange between I-95, I-395, and State Highway 836. "Highway equals progress" was the thinking at the time the interchange was built, and many viewed the displacement of people and businesses as an "unfortunate but unavoidable" byproduct of this progress. Many of the residents were displaced to completely different cities such as Richmond Heights, Brownsville, Allapattah , Liberty City and parts of North Dade without compensation from Miami. The local residents were not allowed input on the matter of installing the interchange at the time due to segregation.

The former inhabitants continue to think of Overtown as home, even generations later. "We are rooted in that community because our folks built Miami.”says Agnes Rolle Morton, former Overtown resident. Where once boasted over 300 local businesses, only about 40 remain. The vacant space underneath the highways is bare and around half of the current residents live in poverty today.

For years, planners have suggested initiatives to mitigate the impact of the 1.3-mile I-395 spur, which connects I-95 to Miami Beach. In 2002 there was a proposal to replace the highway with an open-cut, below grade freeway, reintroduce smaller blocks and mixed uses into the area, and possibly re-create a jazz and entertainment district. In February of 2010, the Federal Highway Administration (FHWA) conducted a Final Environmental Impact Statement, which evaluated five different alternatives for I-395—a no-build option, two elevated alternatives, one tunnel alternative, and one open-cut, below-grade alternative.

The Florida DOT (FDOT) argued that a super-elevated highway would offer a more affordable method of restoring property values to the area while serving transportation needs. As of October 2010, FDOT were still advocating reconstruction as a super-elevated highway, at a cost of about $580 million. This option would increase the highway from four to six lanes and create emergency lanes. This option was included in Miami-Dade County's 2035 Long Range Plan. 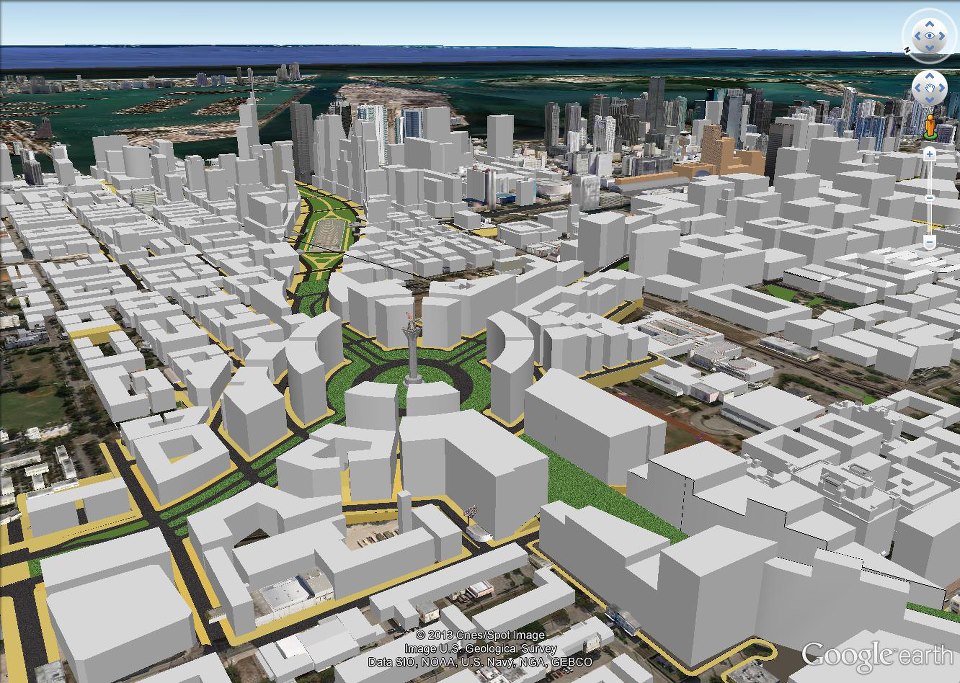 The final environmental impact statement, completed by FDOT and FHWA, in February of 2010, postulated that any rebuild must achieve increased capacity; it identified an elevated freeway as the only viable construction option. There is some degree of organized neighborhood opposition to this initiative, but FDOT has moved forward with lane expansion and repairs totaling $7.5 million already. In July of 2010, FHWA issued a record of decision that selected one of the elevated freeway alternatives presented in the Final EIS. Despite a project by Professor Andrew Georgiadis at the University of Miami School of Architecture in 2012 which designed several alternatives to rebuilding the expressway, the FDOT is leaning towards the reconstruction plan as the best option. 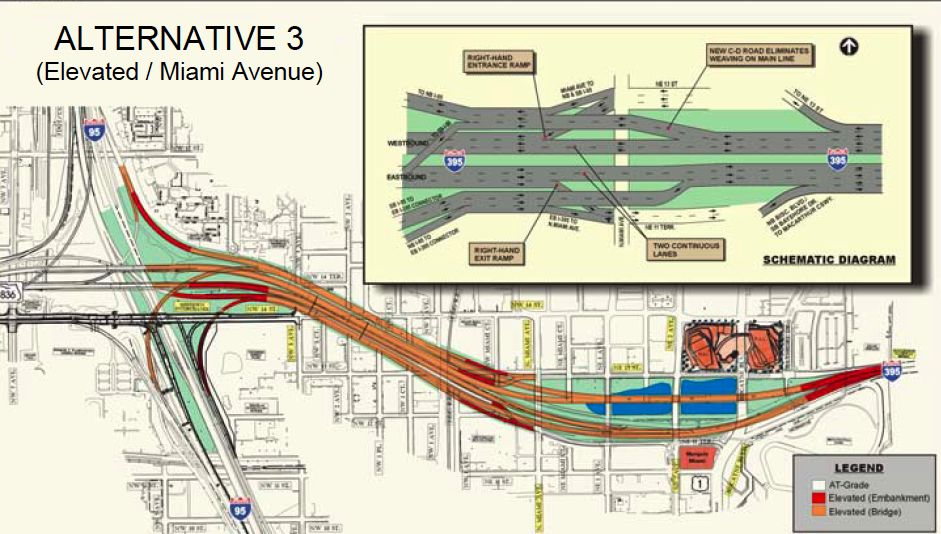 In July 2018, FDOT issued a Notice to Proceed on the $802 million bridge and double-deck highway project that will reconstruct I-395.

Highways and the Decay of Once Glorious Overtown, TransitMiami.com, June 2013
How I-95 Shattered The World Of Miami's Early Overtown Residents , WLRN.org, Septemeber 2013
Highways to Boulevards: Miami Facebook Page