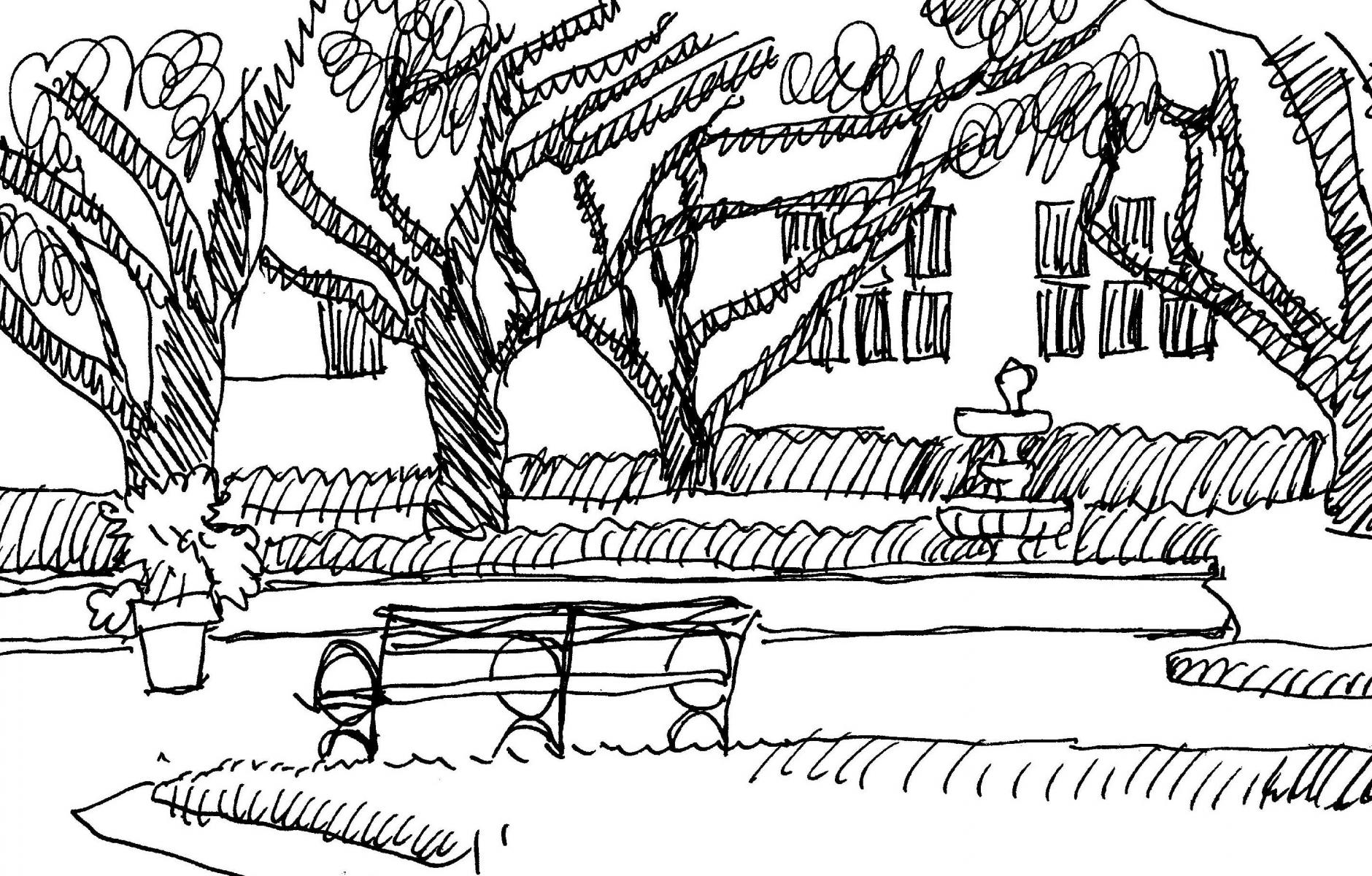 Space is experienced positively only when it is coherent: Campus design, part 8

Open space will be used when we feel that it encloses us with a semi-permeable, welcoming perimeter. The design of successful urban space therefore relies predominantly on human psychological responses.
NIKOS SALINGAROS   &nbspAUG. 6, 2018

Author’s note: This is the eighth in a series of ten essays that present innovative techniques for designing and repairing a corporate or university campus. These tools combine New Urbanist principles with Alexandrian design methods. Architectural academia perversely condemned coherent urban spaces as “old-fashioned”. It then discarded documented knowledge of how to design them, making sure that inviting human spaces — the opposite of preferred industrial-minimalist spaces — were driven to extinction. We have to start all over, to understand the wonderful complexity of how human beings interact with lived space. Experimental findings on spatial experience can help to create human spaces today, bypassing the cult dogma of discredited design fantasies. Nevertheless, prestigious firms that create fragmented, splintered space paradoxically get hired to repeat this result elsewhere.

We find spaces that embrace us gently inviting. Such spaces, formed from concave boundaries, embody the “principle of concavity”, which tells us that we prefer surfaces that enclose us in a more or less organic manner.

Experiments in psychology document that we have a built-in aversion to sharp objects, especially to those that point at us. Most of us prefer rounded moldings to angular moldings in window frames and sills. At the next architectural scale, walls that are not vertical and ceilings that are neither symmetric nor horizontal, and re-entrant walls and ceilings bulging towards us instead of yielding outward cause alarm. Emotional discomfort can be triggered by protruding design details meant for purely aesthetic effect — undoing real or apparent structural utility of elements such as columns, pilasters, or beams.

If we are to use urban space with pleasure and make us feel reassured, it must be partly surrounded by an enveloping perimeter. It cannot just be leftover space between stand-alone “look-at-me” buildings. In those leftover spaces, we tend to feel exposed and threatened because the nodes and paths they contain are not defined coherently (see “Urban Space and its Information Field” in (Salingaros, 2005)). This is a basic design pattern from A Pattern Language (Alexander et al., 1977) — the pattern summary is my own:

Pattern 106: Positive Outdoor Space. “The built structures partially surrounding an outdoor space, be it rectangular or circular, must define, in its wall elements, a concave perimeter boundary, making the space itself convex overall.”

Yet modernist open spaces consistently violate this pattern. Such exterior space lacks internal connectivity and fails to fit into the expectations formed by our instinctive judgment of space. This expectation is built up over generations, passed down to us by previous users of the built environment as well as originating in our own experiences.

Many showcase 20th and early 21st Century buildings tend to be surrounded by lots of open space that is never used. Hard plazas and green areas designed around the buildings violate all the living patterns for urban space; therefore those areas tend to be unpopulated, hence they are wasted spaces. Sometimes vast in dimension, these spaces tend to be too open; part of them may be semi-enclosed but threatened by an overhanging roof that creates a feeling of alarm.

For decades, architectural space has been compromised by mistaken assumptions (anti-patterns). Furthermore, the industrialized world continues to create formally striking places that skimp on essential human values. Whether cramped, splintered, or so vast as to engulf human scale, those environments are ultimately useless. The proper connected intimacy of space, offering the psychological protection essential for inviting people to use it, is absent.

Urban space is not two-dimensional. It is not simply a ground plan. Additional geometrical elements are needed to complete the sense of a three-dimensional enveloping boundary. Those elements work in the vertical dimension, and arise from the scales of architecture, not urbanism. Much depends on whether the details of the surrounding walls transmit messages that are either psychologically friendly or hostile to those who visit the open space. Mirrored or transparent curtain-wall façades diminish the visual sense of enclosure of a public space, making it less informative, less interesting, less friendly, less functional. On the other hand permeable solid façades showing organized complexity (as defined by their aligned symmetric doors, windows, and other details) improve the functionality of an urban space.

Like a framed picture, every useful and satisfying urban space reaches visual completion at a certain height off the ground. A roof cornice, for example, on facing buildings adds a horizontal lip to the built perimeter of urban space, creating a degree of concavity that enhances the feeling of enclosure (see “Urban Space and its Information Field” in (Salingaros, 2005)). Yet such framing edges are dismissed as inessential because their original function is not understood; yet they play a major supportive role in the definition of reassuring urban space through the principle of concavity.

In A Vision of a Living World, Book 3 of The Nature of Order (Alexander, 2001-2005) Christopher Alexander introduces the concept of “hulls” (as in the concave hull of a boat) in public space. This reinforces the idea of coherent public space that promotes the sensation of being in a giant outdoor room, a room without a ceiling. Alexander also describes the process of designing indoor rooms whose volume and boundaries offer the qualities necessary to induce psychological wellbeing. Altogether, we possess a set of powerful tools for creating coherent living space, interior or exterior, defined by the characteristics of its enveloping and sheltering boundary.

Buildings shape urban space, and the information on their façades then determines if that space is used

With Pattern 106: Positive Outdoor Space, Christopher Alexander and his colleagues identify the need for concavity and enclosure in open spaces (Alexander et al., 1977). I derived this result later from informational arguments. A New Theory of Urban Design (Alexander, Neis, Anninou & King, 1987) states this in the strongest terms: “space for pedestrians, streets, gardens, even parking lots, should be formed by surrounding buildings, not vice-versa”. It is the space that is important, and the buildings are the means to define it. Whenever buildings are the focus of attention, space is left undefined. With The Nature of Order (Alexander, 2001-2005), Alexander goes further to anchor the urban fabric on a continuous ribbon of public space.

The materials used in building façades play a crucial role in creating the spatial information field; the surface quality being an independent factor from the geometry. High-tech materials are a necessary component of any new architecture. Of all new materials encompassing a wide range of qualities, however, those favored so far have one feature in common: they minimize surface information. Therefore, one of their principal effects is to diminish information access (and I argue that this is deliberate). If we wish to help the formation of urban space, then we have to start using materials, both old and new, with the aim of enhancing surface information.

Historical buildings employ traditional materials in a way that maximizes optical and acoustical information at all angles: an incident signal is dispersed in all directions so that it can be received by many observers. Surfaces that act in this way have special characteristics. They are: 1. Textured, with articulated relief that reflects signals in different directions; and 2. Painted in bright colors with a high color value close to white. Relief, surface texture, and sculpted decoration reflect sound and light all around (non-specular reflection), whereas pigments absorb an incident ray, then re- radiate the energy in all directions (scattering). The net effect is the same.

Relief patterns throughout traditional architecture distribute sound and light, making a wall partially reflective at an oblique angle. By contrast, smooth polished walls reflect back only at a single normal (orthogonal) angle to their surface. There is no optical contact above eye level. Even worse, a reflective mirror finish prevents all contact because the eye cannot focus on a mirror. At the other extreme, very dark colors of any hue, and especially matte black, dark gray and dark brown, absorb all the visual spectrum and don’t retransmit anything at any angle. Building exteriors in such colors minimize information access, independently of any surface relief. Bare concrete is usually a matte medium gray, with poor reflective and light scattering properties.

Large panes of plate glass create informational ambiguity: the visual signal indicates a surface, but there is no information. Depending on the angle, dark tinted windows are either too transparent, too reflective, or too absorptive to define a spatial boundary. The only way to reinforce the visual signal is to use a structural frame between window panes; enough of it to provide unambiguous information. This solution worked for centuries, as long as glass could only be produced in relatively small panes. The need for small window panes is noted by Alexander as Pattern 239: Small Panes in terms of indoors transmitted light (Alexander et al., 1977), whereas we are concerned here with outdoors reflected light.

From “Urban Space and its Information Field” (Salingaros, 2005).