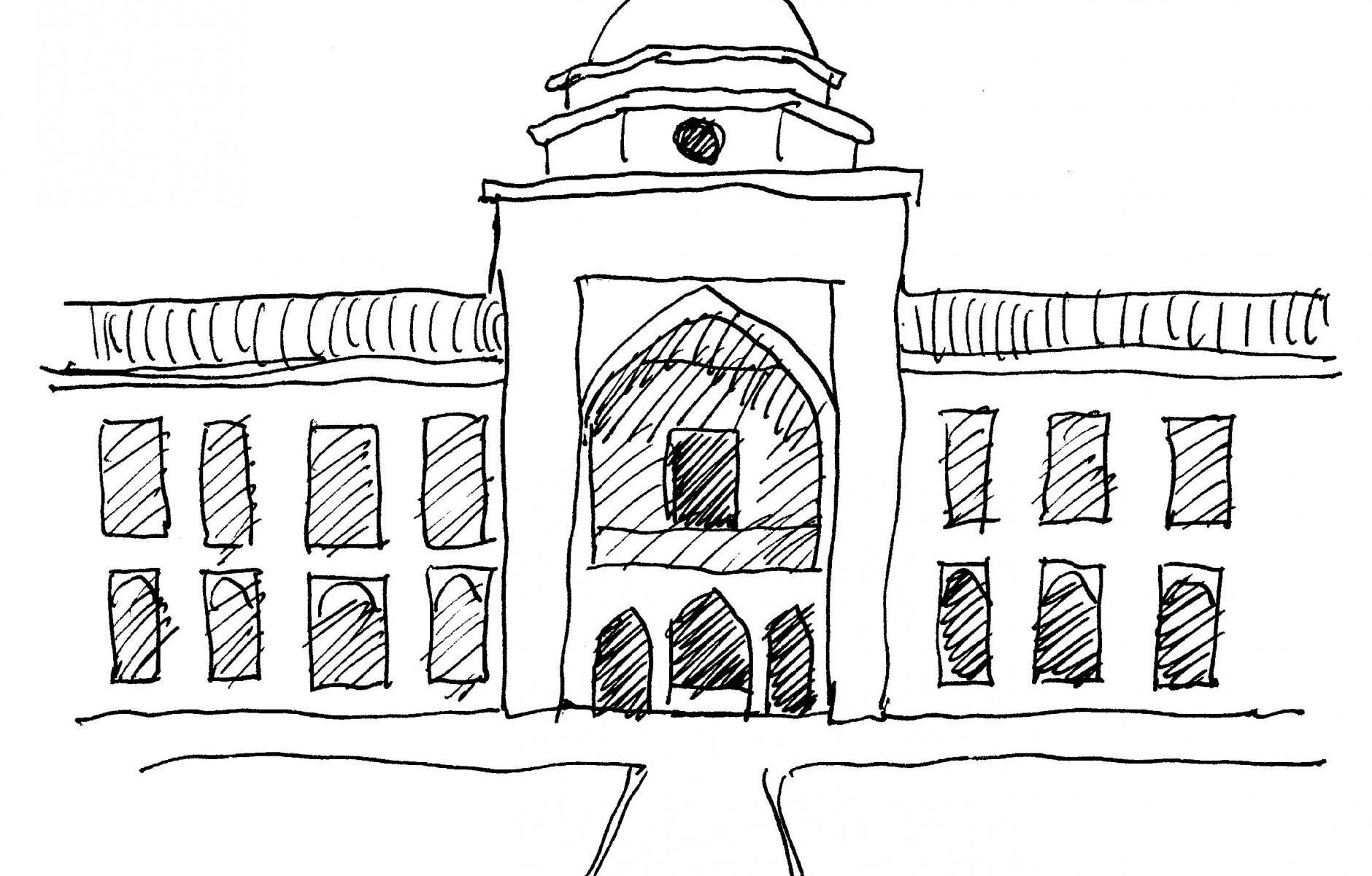 The university campus as a microcosm of tradition: Campus design, part 6

Institutions face a fierce opposition between living campus environments that look old-fashioned, and contemporary architectural expressions, which do not contribute to emotional and physical wellbeing.
NIKOS SALINGAROS   &nbspJUL. 18, 2018

Author’s note: This is the sixth in a series of ten essays that present innovative techniques for designing and repairing a corporate or university campus. These tools combine New Urbanist principles with Alexandrian design methods. The specific form language of buildings, together with the urban space typology, determines whether the campus provides a healing environment or not. Traditional form languages linked to climate, cultural heritage, and geography work best — but both industrial modernist and avant-garde buildings turn the campus into an alienating experience. This conclusion generates violent controversy between architects and New Urbanists, despite being proven by recent experiments on perception. Reference will be made to eight city types as described in the book-length paper “Eight city types and their interactions”. These are labeled: Nourishing-physical, Fractal, Network, Spontaneous self-built, Virtual, Developer, Anti-network, and Inhuman. Every city, and each region of a city, is some mixture of these eight city types.

Well-defined urban space is not merely an aesthetic option; it is a vital necessity to the campus experience on a human level (Salingaros & Pagliardini, 2016). The most valued universities have prominent open spaces, not necessarily large, but always distinctive and very well defined. University open spaces work best of all, and are the most memorable, when flanked by historic buildings (i.e. particularly those with well-developed form languages in their designs). Those spaces frequently define the university’s identity for the rest of the world.

Creating welcoming urban space depends upon building types. Many universities pride themselves on having buildings designed in contemporary styles placed prominently around campus, and newer additions seem to follow an institutional model of stand-alone buildings. Fashionable “contemporary” buildings are being built more and more with donations from wealthy donors (who expect their name to grace that building), but research shows that more traditional biophilic architecture lends itself better to a learning environment (Nourishing-physical city) (Salingaros, 2017).

Pre-modernist buildings provide, through their materials and designs, organized information that helps trigger a greater sense of wellbeing, which in turn promotes greater participation and engagement on the part of students, faculty, and staff. To the contrary, industrial-modernist buildings emulate sensory deprived environments, which can create a degree of hidden anxiety that permeates the learning experience. It is harder to learn and retain information in stressful situations or environments. Parents expect their children to learn from traditional stores of knowledge, and, while innovation is expected and welcomed, it is not supposed to displace inherited knowledge. The traditional center of learning represents cultural inheritance, and that should also show in its buildings.

An informal survey of brochures put online to entice prospective students in the USA (and even more, to convince those students’ paying parents) reveals that the vast majority features strictly traditional buildings. Those older buildings have an instinctive appeal because they link to stable and timeless values. While universities may indeed have industrial-modernist or alarmingly “contemporary” buildings on campus, those are not usually displayed in the brochures. Expensive private institutions, especially, employ psychological marketing techniques to justify the high expense of a university degree with their long-standing prestige. Those present their traditional campus structures instead of their more contemporary (abstract) structures, since people typically respond to the thrill of architectural transgression with alarm, and subconsciously sense that inherited knowledge is also being threatened (Salingaros, 2014).

Two separate design problems are relevant to institutions of learning: (i) choosing an appropriate architecture for new buildings, and (ii) laying out the plan of the campus. The first question leads to a sort of schizophrenia, because parents tend to want traditional “reassuring” buildings, whereas the university is pushed by fashion trends to choose the opposite in new buildings. It would appear that the administration recognizes this conflict, preferring that the parents discover the alarming contemporary buildings on campus — representing transient ideas — only after their children start to attend classes at that institution.

The second problem creates a conflict between the need for additional buildings, and the necessity for all students to reach their classes within a 10-minute walk (the normal break between classes). These two demands are irreconcilable if the campus keeps expanding with singular new buildings, as most do. The solution is to implement an intelligent compactness and intricately folded complexity, such as I discuss here under the Fractal city (Salingaros, 2017). The opposite trend, which is to erect stand-alone industrial-modernist or “signature” buildings, negates compactness and useful urban spaces. For creating intelligent compactness and intricately folded complexity, traditional spatial solutions work best.

Institutions that have gambled with their endowments to erect gleaming new buildings by trendy architects are participating in a very expensive experiment. They invested in flashiness instead of reinforcing the spatial and urban qualities of the campus. They took a massive bet that those cutting-edge university buildings will draw in a new generation of paying students. A separate misconception is that cutting-edge research requires alien structures to house it, and thus universities erect flashy new buildings to draw in research dollars. Whether that occurs or not is a matter to be determined by future applicant statistics and number of grants. Nevertheless, partial results already hint that the experiment of innovation through fashionable but disruptive design is a dismal failure. Lists of “The ugliest campuses in the USA” invariably include precisely those institutions whose buildings’ design purposely panders to pseudo-intellectual pretentions that naturally oppose our biology (Inhuman city) (Salingaros, 2017). Who wants to go to a University that is included in such a list?

A glowingly positive example is Christopher Alexander’s High-School/College campus outside Tokyo, built in 1985 (Alexander et al., 2012). Alexander and his design team researched deeply into Japanese architectural culture to extract a form language appropriate for an institution of learning. The result is a modern campus that has comfortable, timeless qualities. Students, teachers, and parents love it. The only problem that arose was with the local construction companies, which had been expecting to build the usual concrete boxes.

An architecture that reverses structural algorithms so as to create disorder — the same algorithms that in an infinitely more detailed application generate living form — ceases to be architecture. Deconstructivist buildings are the most visible symbols of actual deconstruction. The randomness they embody is the antithesis of nature’s organized complexity. This is despite effusive praise in the press for “exciting” new academic buildings, such as the Peter B. Lewis Management Building at Case Western Reserve University in Cleveland, the Vontz Center for Molecular Studies at the University of Cincinnati Medical Center, and the Stata Center for Computer, Information, and Intelligence Sciences at MIT, all by Frank Gehry. Housing a scientific department at a university inside the symbol of its nemesis must be the ultimate irony.

Otherwise knowledgeable clients — including academics — have been seduced to commission tortuous buildings in the deconstructivist style. There are fellow architects who proudly proclaim the virtues of a new university building by a famous deconstructivist architect, such as the Aronoff Center for Design and Art at the University of Cincinnati by Peter Eisenman. At the same time, ordinary people consider it ugly, odd-looking, and senseless.

Deconstructivist buildings resemble ruins whose structure has been somehow violated: Warsaw, Dresden and Hiroshima immediately after their bombing; buildings after a major earthquake; Manhattan after 11 September 2001, etc. These structures encode their physical violation in what remains of their destroyed form, and this quality is sought by some deconstructivist architects. Industrial materials tend to produce jagged, fragmented ruins that remain so because they weather very poorly or not at all. But the weathering of natural materials generates an altogether different type of ruin; one in which time and nature — often helped by human interventions at reinforcing and partially restoring what is left of the structure — try to minimize the form’s violation.