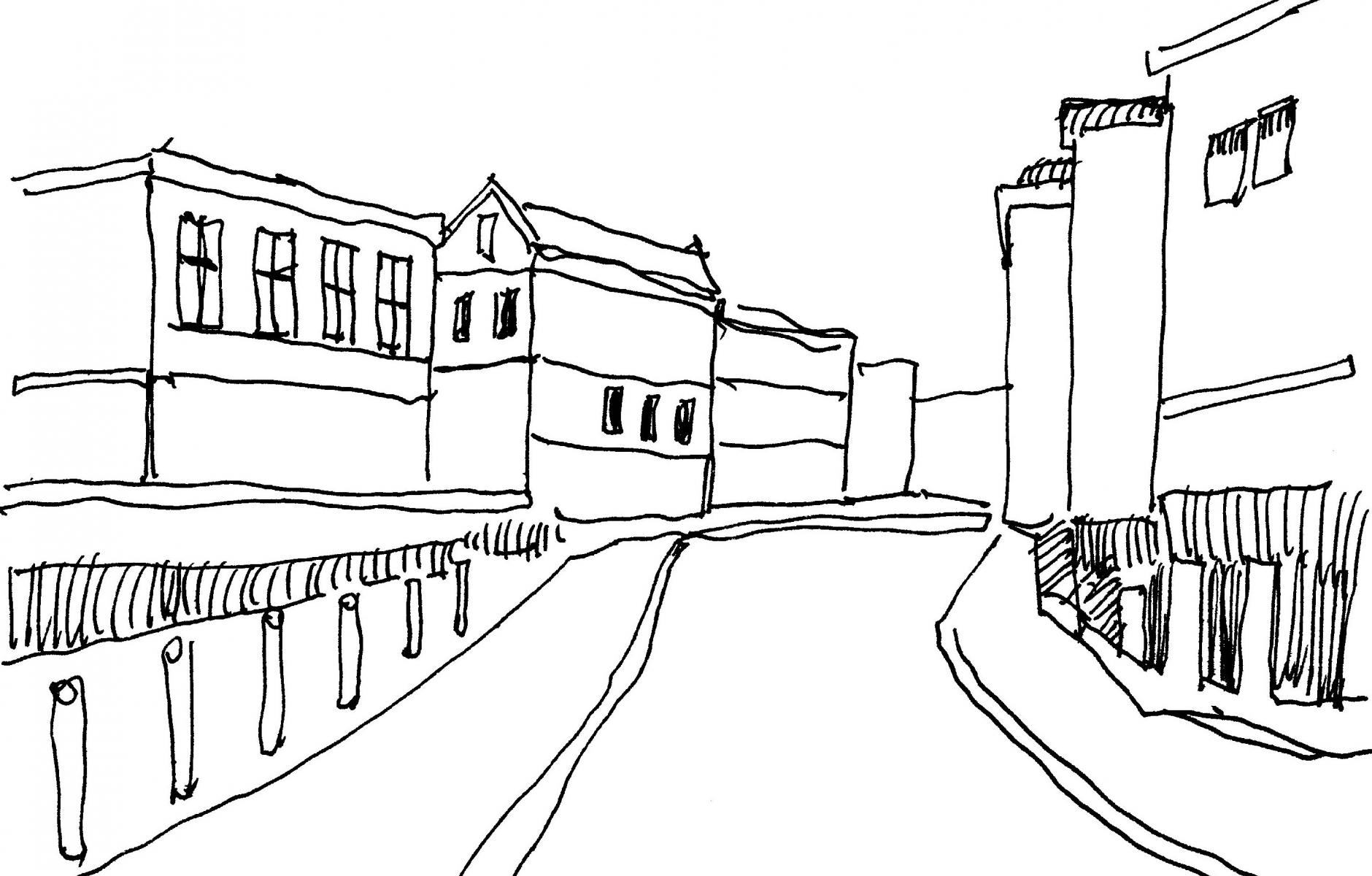 Author’s note: This is the third in a series of ten essays that present innovative techniques for designing and repairing a corporate or university campus. These tools combine New Urbanist principles with Alexandrian design methods. Traditional principles of human-scale urban design and planning shape a campus to make it fully alive — especially when the urban fabric is intimately connected to non-university functions somewhere on its perimeter. Reference will be made to eight city types as described in the book-length paper “Eight city types and their interactions”. These are labeled: Nourishing-physical, Fractal, Network, Spontaneous self-built, Virtual, Developer, Anti-network, and Inhuman. Every city, and each region of a city, is some mixture of these eight city types.

There is no practical reason to isolate a campus from the larger community, and that is only a holdover of single-use planning.

People perceive campuses with block buildings and hard open spaces as bleak, desolate, threatening, inhuman, and totalitarian. The human scale is missing. And yet this industrial style has shaped a majority of institutional construction for decades. It would appear that school administrators decided to industrialize education, and concluded that industrial-modernist architecture was most appropriate for the task. The campus becomes a piece of the Inhuman city (Salingaros, 2017) in which buildings are placed too far apart to connect.

The planning habit of mono-functional zoning is also applied to unnecessarily separate a campus from a region of “normal city”. This way of thinking is responsible for the “corporate campus” of major companies isolated in the woods, or at least far out in suburbia. But, while that setting has positive biophilic qualities, it is deliberately not part of the city. An even worse precedent is the misleadingly-named “office park”, which is just a cluster of unrelated office buildings. Both of those urban typologies define a life separated from the rest of humankind.

Historical evidence points to the intentional isolation of workers from city life so that they could be totally controlled by the employer during the workday. The corporation tried to force employee allegiance by isolating them. In a similar vein, many people believe that social engineering was applied to High School and college campuses, implementing a fortress typology in order to better control rioting students. But this claim is unsupported: it just happens that architectural style coincided with typologies whose principal concern was security.

While the corporate campus was, at least in name, loosely copied from the traditional university campus, its urban model is the suburban shopping mall surrounded by vast areas of open parking. Everyone commutes by car. But now this typology has come full circle, with institutions of higher learning copying the isolated corporate campus and suburban office park.

From “Eight city types and their interactions”, keynote speech at the 11th International Congress on Virtual Cities and Territories, Krakow, Poland, 6–8 July 2016 (Salingaros, 2017).

We connect emotionally to specific pieces of the environment

We love a city when we can connect to it intimately. We retain a warm memory of that interaction. This memory consists of visual, olfactory, acoustical, and tactile connections. All of these memories can be formed only on the pedestrian level, far below in scale than the shortest walkable path. Our largely subconscious memory of a city is formed on a visceral level, on the physical scale of our own bodies. The “soul” of a city exists precisely on its smallest architectural scales. This turns out to include the “detritus” which modernism tried so hard to eliminate — unaligned and crooked walls, a bit of color, peeling paint, architectural ornaments, a step, a sidewalk tree, a portion of pavement, something to lean against, someplace to sit down outside, etc.

The anti-fractal movement of the twentieth century began with a call to destroy ornament. Architectural ornament is an intrinsic part of the entire city, however, and destroying it destroys one segment of the city’s scales. Such an action erases the levels in the urban hierarchy spanning the scales 1 mm to 1 m. Soon afterwards, structures that anchored urban space — built structures ranging from 1 m to 3 m, such as kiosks, benches, porticoes, gazebos, low walls for sitting, etc. — were erased. Last came the elimination of sidewalks and the pedestrian connectivity of nearby buildings. What was left was only appropriate to the automobile city, not for pedestrian movement.

The pedestrian city has something important to offer, namely — an emotionally nourishing physical environment. There is visual excitement, the joy of physical movement, the thrilling experience of vibrant city life, the sensory stimulation from urban space filled with other people of different types and different ages. Le Corbusier despised all of this, and he went about eliminating it systematically via the CIAM planning rules. His books on urbanism espouse only the delights of driving around in a sports car. The elimination of urban space, connected green space, and the human scale from the urban fabric removed the unique set of forces that generate and support the pedestrian city.

From “Connecting the Fractal City”, keynote speech at the Fifth Biennial of Towns and Town Planners in Europe, Barcelona, 2003 (Salingaros, 2005).