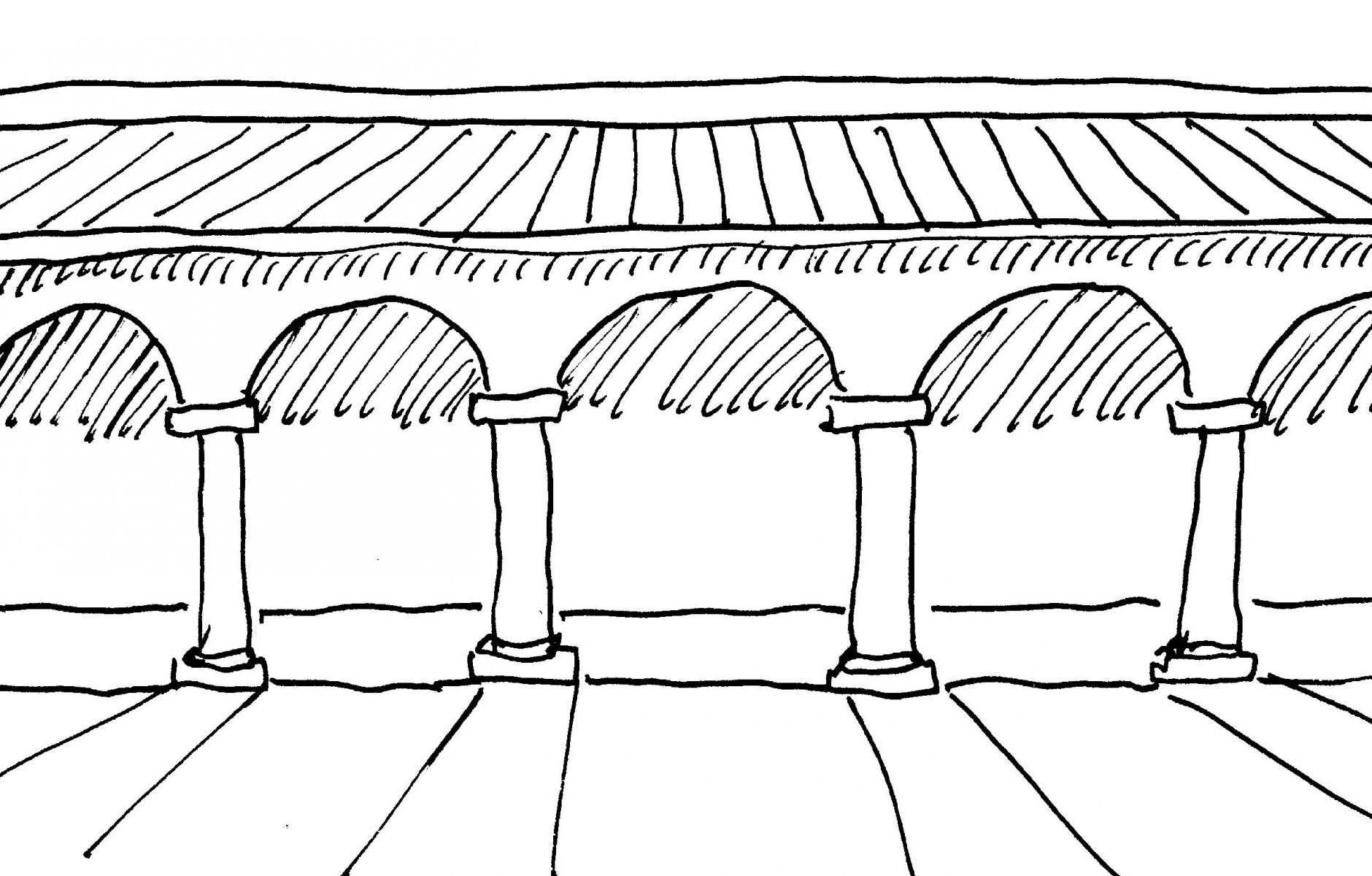 Why we hug the edge of open spaces: Campus design, part 7

Fundamental sensory mechanisms determine how we walk in relation to built structures. This physiological basis must inform the design of pedestrian campus circulation.
NIKOS SALINGAROS   &nbspJUL. 26, 2018

Author’s note: This is the seventh in a series of ten essays that present innovative techniques for designing and repairing a corporate or university campus. These tools combine New Urbanist principles with Alexandrian design methods. We are physiologically drawn to visual destinations, while the perimeters surrounding open space influence people to move about on paths that provide emotional satisfaction. Our movements are thus a response to informational and spatial sensitivity. Yet design culture seems unable to break out of its totalitarian mind-frame. Dominant architectural thinking forces people onto paths that are “designed,” something that goes against our biology. Consequently, we either grudgingly use paths fixed by artistic or formal abstractions — and hate them — or avoid them altogether so as to protect our mental health.

Human biology, an artifact of our evolution, dictates much of how we behave, and offers the key to how space is actually used. Interactions with the built environment determine our behavior, often in surprising and mysterious ways. For example, people tend to avoid exposed open space and prefer to walk along its protected edges or perimeter boundaries (Salingaros, 2005: pages 32-33). Ann Sussman and Justin Hollander (2015) discuss the mechanism of thigmotaxis, defined as how organisms move in response to edge conditions: research finds that not just humans today but primitive microscopic organisms going back in evolutionary times also tend to avoid open spaces and stick to protected edges. For the human brain, the edges not only help us feel safe, they help us efficiently orient and create a “mental map” of our surroundings.

Our sensory system evaluates every physical setting we inhabit, however briefly. Our neural computations do not present us with a quantitative answer, of course, but instead we get an unmistakable feeling in our body reacting to hormones and nerve signals. Our body’s intuitive response tells us whether the immediate environment is safe or not. The human perceptive system is exquisitely designed to detect variations in the quality of our surroundings. We adapt our behavior accordingly.

A spatial configuration, translated subconsciously but very rapidly into an intuitive assessment of where we are, can be evaluated only in person, directly, using one’s senses — all of them. That is why, ultimately, our perceptual system is the only qualified and dependable judge of where we are and whether it is good for us. Such judgments cannot easily be made from pictures, architectural drawings, intellectual arguments, or others’ opinions.

Almost all architects have been taught to think of space as fixed and static, whereas human movement and life always generate a dynamic interaction with our environment as we move through it. Life couples us to the structures we inhabit, our perception engaging an information field that shifts continuously as we move. Dynamic interaction determines the effect that the environment exerts on us as we move about, and these complex signals are static only when we are stationary. Adaptive design takes into account our visceral responses as a result of movement — the dynamic versus the static nature of information, which are entirely different.

The architectural experience of paths, for example, can be explained by understanding “dynamic biophilia.” Wayfinding, whether inside or outside, depends on our assessment of environmental information changing as we move about. Markers and signals help us navigate a space by continuously reinforcing our perception of how we are expected to flow through it, or, conversely, such signals, if poorly designed, hinder our movement with psychologically confusing cues (Lyons Stewart, 2015). Much directional and navigational information resides in visual patterns on the ground. These engage us and draw us to move forward, and keep us on the path.

In conventional architectural practice, paths in buildings and other built spaces tend to be designed as abstractions. Artistic intent expressed on a plan too often trumps utility and human nature. That approach ignores both biophilia and the dynamics of human interaction with structures. People get lost because the architect or interior designer did not apply adaptive design to direct movement efficiently (Lyons Stewart, 2015). We frequently get ambiguous or even contradictory signals from the built environment as we move. The paths by which we navigate spaces can be disturbing — often generating the sensation that we would rather walk elsewhere but are thwarted by obstacles, either signs denying passage or structures blocking passage. We are biological creatures, after all, and respond subconsciously far more than we realize to the world around us.

A Pattern Language (Alexander et al., 1977) presents design tools for indoor and outdoor paths that pay attention to human sensibilities. The following five living patterns (with my own summaries) provide the elements for a design template that determines paths:

Pattern 98: Circulation Realms. “Navigation must be intuitive and effortless. It helps to have an obvious sequence of flows, a correct positioning of paths, and appropriate supporting structures.”

Pattern 114: Hierarchy of Open Space. “Satisfy the feeling of having one’s back protected by a solid structure (refuge), while being able to see out to the world (prospect).”

Pattern 120: Paths and Goals. “A path is composed of a sequence of intermediate destinations. Flow is governed by the body’s instinctive movements and psychological reactions.”

Pattern 121: Path Shape. “A successful path is also a welcoming space for people to linger in if they are not in a hurry.”

In particular, Pattern 114 (Hierarchy of Open Space) anticipates and contains two notions later used by writers on biophilia: “refuge” is a psychologically safe space where we feel free from threat, whereas “prospect” means the ease of seeing locations some distance away that might attract us if we perceive obvious biophilic properties there (Browning et al., 2014; Kellert et al., 2008).

Results from neurophysiology, living patterns, and biophilia reinforce and tie together concepts necessary for the design of paths. These fruits of our evolutionary development from human ancestral environments are arguably shared by primitive life forms that move about even to this day. Applying these design notions to paths, every portion of the spatial environment along a path must offer refuge so that a person feels safe and comfortable while negotiating that journey. At the same time, a prospect offers us a range of goals for our journey, if we choose to leave our refuge and move toward them. An intelligently designed path will, in theory, reduce our instinctive resistance to doing so.

From Biophilia and Healing Environments (Salingaros, 2015).

How architecture orchestrates our movements

The ambient information field is akin to a force field that ties us to our surroundings (even though there is no physical exchange taking place). But “image-based design” ignores mechanisms responsible for situatedness. Details that define a welcoming environment are either missing, or are juxtaposed incoherently in many of today’s buildings. Architects who focus on the purity of abstract geometry ignore the ensemble of complex forces acting on our body. The result leads to the opposite of situatedness: a sense of “placelessness," and even anxiety.

An abstract design that looked fine in a rendering, but which failed to evaluate — and adjust for — all predictable human sensory reactions could turn out to be a threatening and oppressive environment when built. Users will avoid those architectural spaces, or force themselves to use them while fighting increased stress levels. Apparently benign design decisions based on abstractions can trigger negative physiological responses in the user. This comes from not thinking about the consequences, or worse, having being falsely taught that there are no consequences. Architects stick religiously to the primacy of “image-based design."

The countless complex interactions that combine to generate a visceral signal determine a comparatively simple set of instinctive behaviors for the user. Our body tells us what to do without thinking. This result is more basic than either psychology or medicine, and underlies the physical experience of architecture. It cannot be overridden by formal design. A space designed for a predetermined function and use could be more suitable for a totally different behavior; or it could be dysfunctional, because our body is reacting viscerally to that space’s hostile geometry, surfaces, details, and complexity (or lack of it) in an unexpected way. Those architectural mistakes have been ignored for too long: it’s time to apply science to fix them.

From “Why we need to “grasp” our surroundings: object affordance and prehension in architecture” (Salingaros, 2017).

Nikos A. Salingaros (2017) “Why we need to “grasp” our surroundings: object affordance and prehension in architecture,” Journal of Architecture and Urbanism, Volume 41, No. 3, 163-169. http://zeta.math.utsa.edu/~yxk833/Whyweneedtograsp.html