Charter of the New Urbanism Book

The original Charter of the New Urbanism, published in book form in 1999, was a groundbreaking document aimed at reclaiming cities and towns from the destructive force of suburban sprawl. Thoroughly updated to cover the latest environmental, economic, and social implications of urban design, Charter of the New Urbanism, Second Edition features insightful writing from 62 authors on each of the Charter's principles. Featuring new photos and illustrations, it is an invaluable resource for design professionals, developers, planners, elected officials, and citizen activists. Real-world case studies, plans, and examples are included throughout.

This pioneering guide illustrates how CNU works to change the practices and standards of urban design and development to support healthy regions and diverse, complete neighborhoods. 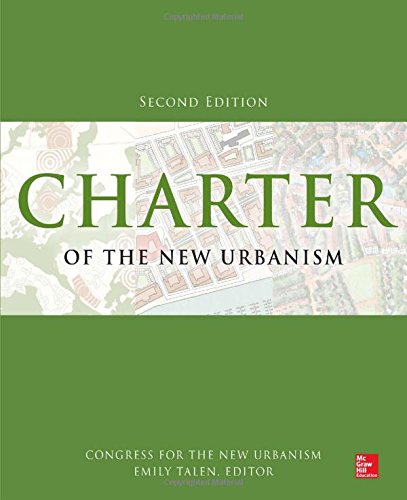 “In the first edition of this book, I wrote that I did not expect the Charter to be a stagnant document, that the ideas and strategies of New Urbanism would need to mature and evolve,” writes Shelley R. Poticha, former president of CNU and now Director of the Office of Sustainable Housing and Communities with the U.S. Department of Housing and Urban Development, in the book’s foreword. “They have. Included here are new and better ways of building and rebuilding – a progression of ideas.“

The new edition includes commentary from some of the most prominent architects and authors of this movement, including Andrés Duany, Elizabeth Plater-Zyberk, Peter Calthorpe, John Norquist, Galina Tachieva, Douglas Kelbaugh, James Howard Kunstler and Ellen Dunham-Jones. Charter of the New Urbanism, Second Edition is available now at Amazon.com and bookstores everywhere.