“It is very easy to photograph a forlorn street and use a computer to calm the traffic, put in some transit, and add lovely buildings and trees,” wrote Jeff Speck, bemoaning the proliferation of unexecuted corridor studies. “So few of these projects have been executed that, for a time, I argued against commissioning them, since they tend to raise false hopes. Enter Arlington County.”

Initially built 200 years ago as a toll road connecting Washington, D.C. to Virginia, the Columbia Pike of today serves as a direct route to the Pentagon and other capital landmarks. Until recently, the land along this Arlington thoroughfare was underutilized as a result of stifling zoning regulations and aging single-story strip malls. In the world of New Urbanism, this treatment of such an historic community seemed almost blasphemous, so ambitious efforts were made to return the street to its more vibrant beginnings.

The first of two successful public charrettes was held in 2002 (the other in 2011), which garnered widespread support from the community and catalyzed the development of an efficient and innovative Form-Based Code for the renovation of the Columbia Pike. For the first time in over forty years, mixed-use developments were built, sidewalks were widened, and lighting was installed for pedestrian and bicycle-friendly purposes. “Thanks to skilled designers, a clear, implementable code, and a truly capable client, this plan is getting built, and well,” Speck praises. Brent Toderian notes “the impressive, real-life success of the initial phases of actual design and construction” as a main factor in the jury’s selection.

In addition to increased walkability, there is an ongoing endeavor to integrate a streetcar into the landscape of the corridor, which would undoubtedly cut back on automobile congestion as well as the reliance on bus transit, which often causes traffic problems of its own. Higher-rising apartments built close to the streetcar and along the corridor itself may very well enhance safety, adhering to the principle of “Eyes on the Street.”

Affordability can be a struggle when renovating communities, especially ones so close to major cities. With over 6,000 units planned to be priced within 40%-80% of the area’s median income and plenty of those committed to remaining affordable in the coming decades, there is no doubt that diversity has remained key throughout the implementation of these updates.

The Columbia Pike Initiative was one of the first and largest instances of applying Form-Based Code to such an historic community in the country, and strides are continuously being made to move Arlington toward a more walkable, harmonious future. Jeff Speck is one of many looking forward to the coming changes. “I hate to be wrong, but I’m glad to see that these efforts can bear such tasty fruit.” 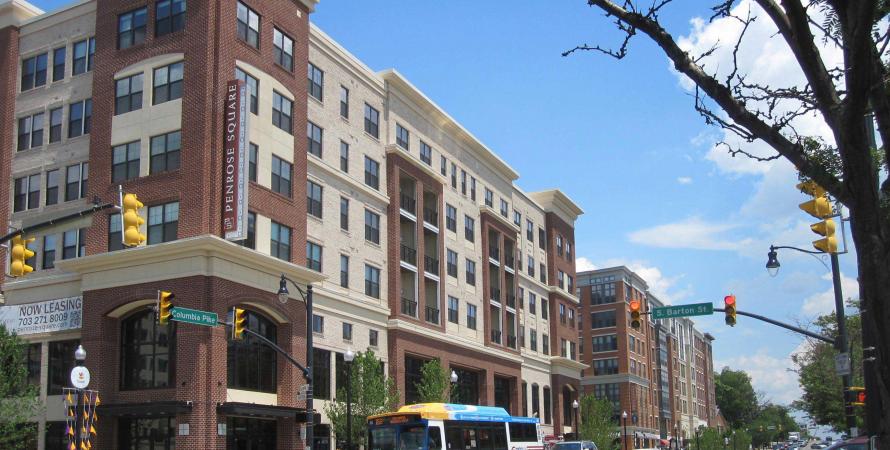 First built over 200 years ago as a toll road connecting Washington, D.C. to greater Virginia, the Columbia Pike now serves as a direct route to the Pentagon and other capital landmarks.