Seeing may be believing, according to the old adage, but doing can be even more instructive. That’s the idea behind Small Town Tactics, a set of temporary streetscape improvements undertaken in the mountain town of Avon, Colorado, where the primary commercial street suffers from overly long crossing distances, wide travel lanes that allow cars to speed, and a lack of street trees and bike lanes.

Founded as a tiny railroad village, Avon has grown since 1980 into a modern ski resort destination with mostly suburban-style streets. On Beaver Creek Boulevard, a major east-west corridor typical of the area’s network, three quarters of the right–of-way is devoted to automobile travel.

The test was carried out during the summer of 2016 and followed by a September meeting to get public feedback. Nearly every resident in Avon was aware of the project. The public was engaged with signage, walking tours, meetings, public comment emails, and digital preference voting. In civic environments where change is often met with opposition, temporary small-scale interventions can help evaluate the validity of design ideas and build momentum for catalytic change.

Already, the project is gaining momentum with local developers. A new infill project is planned along the corridor that will increase density and eliminate unnecessary surface parking. In addition, the Town is carrying out an economic plan with form-based design guidelines to attract additional development and further activate the street.
“I believe the new layout will positively impact the speeds and safety along Beaver Creek Boulevard,” said one Avon resident. “If we complete the landscaping islands and redesigned curbs, the look of our ‘next to Main’ Street will be incredible.”

By painting the developed alternative first, all users of the street could experience the proposed changes, says Virginia Egger, town manager. The town learned critical information to adjust the design for final implementation—for example, back-in angle parking was eliminated due to unpopularity.

In the summer of 2017, Avon plans to break ground on permanent streetscape improvements. 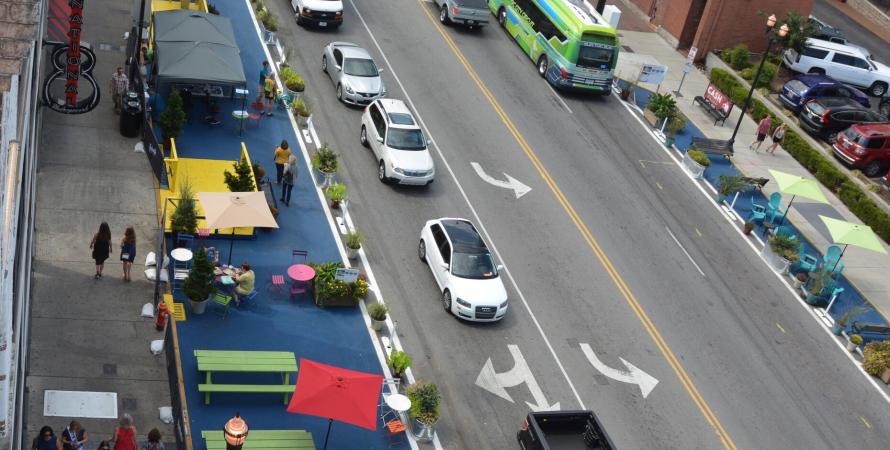 Lower Broadway in Nashville is a major arterial in the heart of the famous “honky tonk” district, with restaurants and bars ofering live music.