An underutilized peninsula across the river from downtown is giving Elkhart, Indiana, an opportunity to diversify its economy. The city is a center of RV manufacturing—an important jobs base that is nevertheless vulnerable to shifting markets and demands.

The city was set to begin revitalizing the 90-acre River District—occupied by brownfield sites, low-density strip malls, and automobile-repair businesses—with a handful of key projects in the queue. These projects, however, looked much like the typical sprawl that had sprung up around the city in recent decades. An aquatic/fitness center proposed a big-box-style plan dominated by a parking lot, a supermarket proposed a suburban site plan, and planned apartments scattered parking around the site and privatized the waterfront. Also, the city had committed $10 million to building a parking structure, despite ample nearby parking.

A public-private partnership, River District Implementation Team (RDIT), realized that these developments would undercut any sense of place in the new district. RDIT hired a new urbanist team, led by Speck & Associates and Stantec’s Urban Places, to propose cost-effective changes appealing to the growing market for an urban lifestyle. The new plan included:

New Urbanist principles guided the revitalization in other key ways:

This plan has had a remarkable impact in a short time. The aquatic/fitness center and the first mixed-use project with 200 apartments opened in 2019; district-wide streetscapes were substantially completed in December 2019. A second mixed-use project under construction will include a 45,000 square foot grocery and 173 apartments, slated to open this spring. “This is design as urban triage, prioritizing key corridors and centers,” notes Charter Awards juror Allison Quinlan, owner of Flintlock Architecture & Landscape. “You don’t have to do everything all at once.” A catalyst for the plan was the idea to not waste $10 million on parking, when surface parking is already available on the peninsula, notes Quinlan. Instead, some of that investment was steered toward improving the public realm.

The overall project is projected to provide a total of 1,000 units of apartments, townhouses, and live-work buildings by 2025. That’s accompanied by 170,000 square feet of retail and substantial workforce and civic space. A town green, civic plaza, a riverfront kayak launch site, a 4-acre park, and nearly a mile of new bicycle lanes are included in the plan.

The previous plan proposed inserting car-dependent development at the densest point on the Transect, immediately across from downtown. Civic leaders realized that this would be a mistake and “opened the door to the creation of a walkable, urban district,” notes the project team. New Urbanist principles provided a framework for a “an act of preemptive sprawl repair” that will generate economic and community value for the city.

“We knew we needed revitalization,” notes Dave Weaver, chair of RDIT. “This plan is providing strategic direction at 30 thousand feet together with the design details on the ground that is really making a difference in getting where we need to go.” 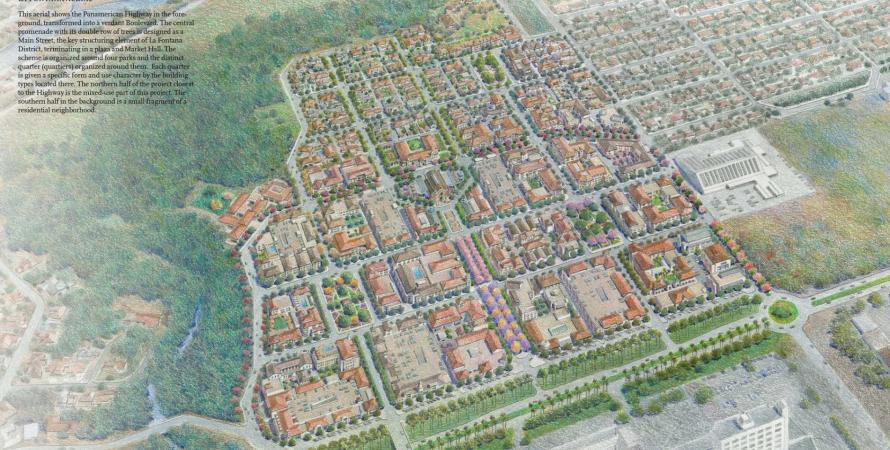 La Fontana District is a 96-acre new district located to the west of the historic city of David, Panama, on a site facing the Pan-American Highway, which stretches from Alaska to Argentina.