DPZ CoDESIGN has been at the forefront of New Urbanism since its beginning, and in 2003 the firm (then called Duany Plater-Zyberk & Company) led the creation of the SmartCode. The SmartCode is a form-based land-use code founded on the rural-to-urban Transect and set up to enable the development of walkable settlements and mixed-use neighborhoods. Montgomery, Alabama, became the first city in the world to adopt the code in 2007. Atlanta-based development company City Loft Corporation then became interested in building a traditional neighborhood development in Montgomery using the new code. They hired DPZ for the project, and for almost three years they worked with local leaders to determine the direction of the project.

The site for Hampstead was 416 acres of unused farmland outside of Montgomery, 30% of which was reserved for green space within the project. As a result, Hampstead is full of parks, preserves, gardens, public squares, play fields, walking trails, and lakes, allowed the neighborhood to retain its connection to nature. Hampstead is also designed to be environmentally friendly, and its houses were built to maximize energy efficiency and water conservation. Many of the homes in the neighborhood are Energy Star qualified.

Hampstead is divided into three neighborhoods, each with their own civic buildings and public gathering places. Each of these neighborhoods are designed so that residents can easily walk from the center to the edge in 5 minutes or less, and the landscape architecture respects the natural contours of the old farmland. Hampstead was named after a London suburb, and it adopted much of the architecture of that town as well; incorporating a variety of live/work units, row houses, cottages, and detached houses. The Town Center includes restaurants, shops, a YMCA, a Racquet Club, and apartments. 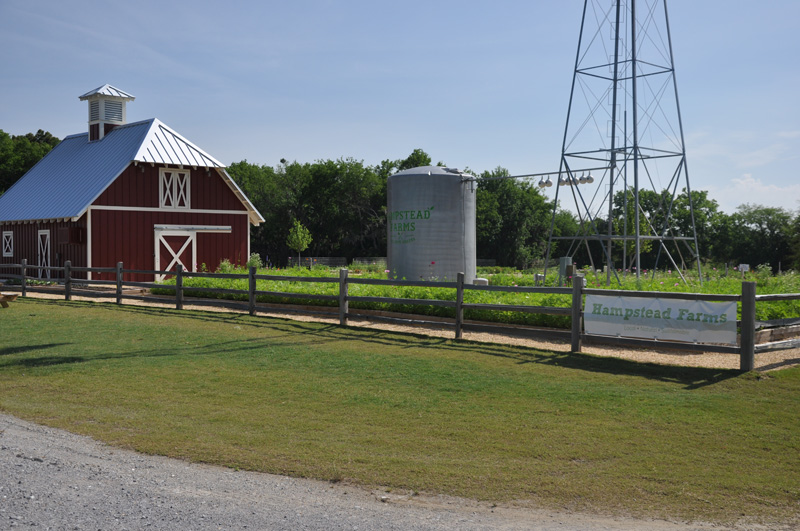 One of the most interesting parts of Hampstead is Hampstead Farms, 5 acres of farmland still in use on the northern side of town. This set-up provides the townspeople with easy access to locally grown goods sold at the Farmer’s Market, and provides the farmers with a clientele to profit from. Hampstead creates a mixed and codependent ecosystem between the town and farms, while opening up acres of real estate which today houses over 200 residents.

Hampstead received a Charter Award from the Congress for the New Urbanism in 2011.

Photo above: Main Entry into Hampstead.