In 1925, the AT&SF Rail Company constructed the Pasadena Santa Fe Station, the destination of a railroad meant to connect LA to Chicago. During this time, the station became known as the “gateway” to Hollywood, Beverly Hills, Santa Monica, and the San Fernando Valley. The Station continued to connect LA to Chicago until 1994, when Amtrak discontinued service to the historic Pasadena site and the property was sold back to the Metropolitan Transportation Authority of LA.

The LA Metro decided that it would incorporate the old Station into an expansion of the subway system into Pasadena, and renamed it “Del Mar Station.” Renaming it did not change its historic status though, and any construction on it or its surroundings was subject to scrutiny from the Department of the Interior. To lead this process, LA Metro hired the architecture and planning firm Moule & Polyzoides to design the project. The plans for the project underwent several revisions, before the final plan to convert much of the old station into a restaurant finally materialized. The Del Mar stop on the Gold Line opened for service in 2003, along with the new La Grande Orange Café in the meticulously refurbished Station. 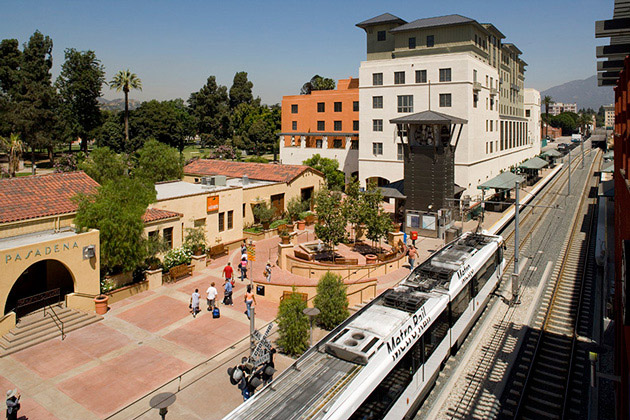 Redoing the historic Station along DOI guidelines would have been challenging enough, but the plan went further to create an entire transit-oriented development. It constructed a collection of residential buildings surrounding Del Mar, which it called the Del Mar Station Transit Village. The Village encompasses 3.4 acres of land and opened up 20,000 square feet of retail. Altogether, this project created 347 new residential units in the immediate area around the Metro stop—an ideal home for commuters. However, recognizing the importance of a mixed-income community, and not wanting Del Mar to become a home only for the rich, the project set aside 15 percent of all residential units for affordable housing. To reduce the presence of cars on the roads, the Village also constructed a subterranean multi-level parking garage capable of holding up to 1,200 cars. Of these parking spaces, 600 are reserved for commuters who do not live in the Village—reaffirming that the Metro is not just for the people who live on top of it.

Del Mar features a significant amount of green space, and the streets are lined with a wide variety of tree types. Courtyards, paseos, and plazas cut between the buildings, adding secluded and shady areas to the complex while also increasing the ability to circulate pedestrians. While each of the buildings have their own private courtyard, one central square ties all of them together. The train line cuts the village in half, and the Metro passes through the middle of the square. It also runs underneath one of the residential buildings, which was designed like a bridge over the tracks. Along with the Station itself, this bridge acts as a gateway into the development and highlights that the community is based on the train. 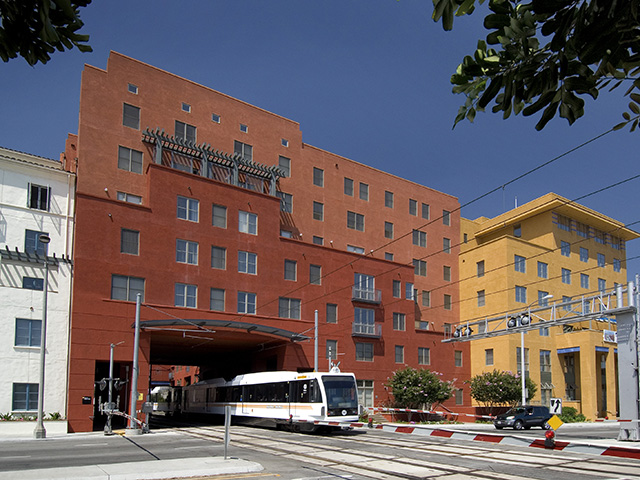 A train emerges from the side of one the Village buildings.

Del Mar Station was awarded a 3-Stars of Excellence Award from the Transit Oriented Development Institute, and received a Charter Award from the Congress for the New Urbanism in 2003.

Photo Above: View of the Central Square from inside the historic Station.