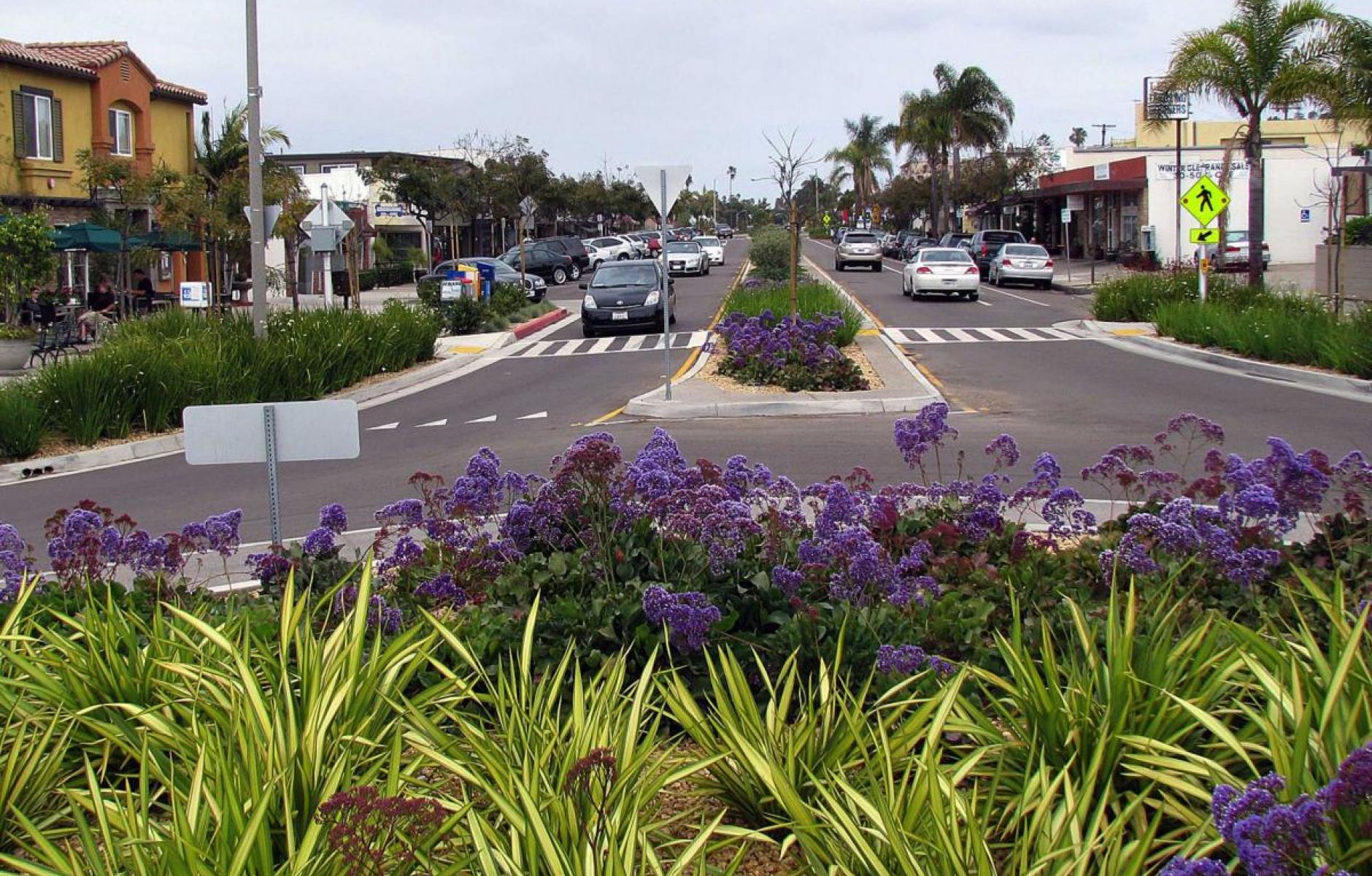 Why street design has not kept pace with automotive safety improvements, and what you can do about it.
ROBERT STEUTEVILLE   &nbspJAN. 17, 2018

On my recent holiday travels, I pondered the tremendous improvements in motor vehicle safety in my lifetime. We didn't have shoulder straps, air bags, anti-lock brakes, front and rear crumple zones, and other now-standard life-saving features when I first rode in cars. Seat belts were strictly optional. Drunk-driving laws were loose and alcohol contributed to far more fatalities on thoroughfares compared to today. It's a wonder I survived.

And yet after these impressive improvements, we still suffer 40,000 vehicle deaths per year in the US and a multiple of that figure in permanent injuries—numbers that have dropped little from a quarter century ago.

I also note that the design of streets has not changed much. The vast majority of roads I drive on are similar to those I remember from when I was a kid. The main difference is that there are far more big, automobile-oriented streets than there were back then.

A recent article by Time Magazine on America’s ten most dangerous intersections reinforces this point. I examined these intersections on Google view, and noticed that they look very much like the major intersections of three or four decades past. They feature the same large curb return radii that allow cars to take the turns at high speed, wide expanses of asphalt, wide travel lanes, and they are heavily engineered.

The Time article mentions potential causes for the lack of safety on what they call “the most dangerous intersection in America,” the juncture of Street and Knights roads in Bensalem, Pennsylvania. It is “plagued by poor signage, dim lighting, discontinuous sidewalks, aggressive drivers and jaywalkers,” the article says, also noting the angle of the intersection, which is less than 90 degrees, and the fact that Street Road has 36,000 vehicles per day—busy but not unusually so for a major thoroughfare in a big metropolitan area.

Not mentioned is the overall design approach, which is a heavily engineered, classic automobile-oriented sprawl design. The intersection has all of the earmarks of encouraging high-speed traffic, such as wide lanes, large curb returns and large crossing distances. The disconnected street network concentrates traffic and speeds it up rather than disperses it and slows it down—like in the historic street grids. Despite numerous studies that identify this approach as a problem, the article, and the engineer that was interviewed, expressed no awareness of the issue.

What are the reasons for the disparity between the tremendous advances in car safety technology and the lack of advances in street design and poor general awareness of the issue?

1) Availability bias: If you can’t imagine something, how can you act on it?

With regard to the safety technology, automobile companies have a direct economic stake in improvements. If a manufacturer’s cars are safer, that company can sell more cars. Also, technological advances capture the public’s imagination and are more likely to be mandated by government. Shoulder straps, air bags, and mandatory use of seat belts are good examples.

With street design, the profit motive and ability of citizens, professionals, and public officials to imagine such improvements are less clear. New urbanists have worked hard on visualizing how streets can be transformed, but imagining major change in the built environment still rarely occurs outside of design charrettes.

Transportation engineering has a history, arguably to this day, of focusing largely on moving motor vehicles. For six or seven decades, the engineering profession generally ignored fine gradations in urban context, designing streets primarily for motor vehicle capacity rather than character. Streets that people love, such as those in historic neighborhoods, were often made illegal—or at least very difficult to build—by prevailing practices and standards. Trained to see the world and their jobs through that lens, transportation engineers have a tough time shifting their focus to a context-sensitive design vision where streets are primarily social and economic places—not just conduits for cars. If the people most responsible for change are unable to clearly imagine it, how could they make it happen?

2) Making the facts fit the theory

New urban planner Andres Duany has described a scenario in the 1990s when he frequently battled transportation engineers. Traffic models would predict one thing, and Duany recalls pointing outside the window of a meeting room where activity on a street or intersection contradicted the models, but the engineers or planners would stick with the model rather than what could be observed. The facts were ignored if they did not fit the theory, which is a common mental bias that is not unique to transportation professionals. Much has changed in the last 20 years and context-sensitive street design is now taken more seriously by engineers. Yet bias still persists.

Moreover, the analysis of risk and reward is likely to be skewed. Given equal choices, the transportation engineer should pick the thoroughfare design that offers the least risk to users (e.g. drivers, pedestrians, bicyclists, transit users, etc.) and the most benefits to the community. Time and time again, context-sensitive/complete streets are proving in the real world to substantially reduce risk. See the case studies in a new ITE book funded by FHWA (links here, here, here here). This real-world implementation is backed up by extensive studies over the last two decades that prove the safety of these designs. Additionally, the case studies and research show that the redesigns have economic and social benefits with broad community advantages. Complete streets would appear to be a no-brainer in many cases, and one would suppose that each new successful example would increase the likelihood of broad-scale implementation. But to date that hasn't happened despite a couple of decades of evidence that it should be happening more often.

3) Fear of changing the status quo

Here's how the skewed interpretation of risk may play into a reluctance to act. Suppose that on a section of roadway, there’s a 50 percent chance of someone dying in the next five years. Option A is doing nothing and letting that 50 percent chance play out. Option B is a street redesign that would cut the chance of a death down to 25 percent. That's a 50 percent improvement in safety, and it's in line with the real world examples in the ITE book. (Case study safety improvements range from 23 percent to 90 percent).

But the question of who gets the blame if something goes wrong also is a factor. If the engineer takes option B, using alternative solutions to the usual designs, he or she faces a risk of being blamed if something bad happens, because they put a stamp on the change. Option A, doing nothing, carries no risk of blame for the current transportation engineer.

The transportation engineer is likely to pick A, which is bad for the community—which misses out not only on substantial safety benefits, but also the economic and social benefits of a better-designed thoroughfare.

I have simplified the thought process for sake of argument. And yet I have little doubt that decisions are tilted against street design solutions that deviate from standard practice—even if the solutions make total sense—due to practitioners’ rational fear of sticking their necks out.

Strong biases for the status quo explain why context-sensitive thoroughfare design has been implemented so slowly. However, biases can be overcome under the following conditions or scenarios:

1) A recent severe injury or death occurring on a badly designed thoroughfare is a powerful agent for change. The fresh memory of a tragedy offers a window of opportunity to act and overcome biases in favor of the status quo. Such an event occurred on Hillsborough Street, Raleigh, North Carolina, when a 1997 fatality led to strong public calls for change. Still, it took 10 years to implement a new design, and this scenario is an unfortunate catalyst. It’s better to redo a street before a tragedy occurs.

2) Make the context-sensitive design the default solution and shift the burden to the engineer to explain any deviation. That’s what Florida’s new Complete Streets Implementation Manual does. In urban walkable context zones, 10-foot-wide travel lanes, which slow down traffic, are standard. “The engineer has permission to increase the lane width for high bus or industrial traffic, but they have to write a memo to justify making the lanes bigger and wider,” says walkability expert Dan Burden. Florida’s manual, which went into effect January 1, is a 180-degree change from the policy in the past, when 12-foot lanes were standard.

3) Create a vision that is so strong that it captures the public imagination will move a project forward, according to Burden. He calls this concept a “marquee project.” The “best way to do it is to build one good street project that convinces us not to make such projects the rare exception, but make it our standard concept,” he says. Lancaster Boulevard, which completely transformed the image of Lancaster, California, is an example of this approach. The city, built mostly since 1950, had little sense of place. Now the center of town is a destination with events and festivals year round—all because of a street redesign. The city is now moving forward with expanded complete street projects.

4) Find a champion with political pull who can break through barriers. This happened in San Diego with La Jolla Boulevard (see photo at top of article), where a city council president at the time was a strong local supporter of a successful redesign. A similar situation occurred in Lower Greenville in Dallas, where a council member created a vision for a street redesign and saw the project through financing and approvals. Both of these projects have resulted in significant economic development.

5) If an overwhelming consensus emerges among experts that new designs represent progressive improvement, the scales will tilt toward action. That consensus is beginning to emerge in transportation engineering toward context-sensitive design, as shown by the new book Implementing Context Sensitive Design on Multimodal Corridors: A Practitioner’s Hanbook, by the Institute for Transportation Engineers and funded by Federal Highway Administration (Disclosure: I wrote the case studies, which were vetted by ITE and FHWA experts, included in the book). The popularity of CNU’s 2017 Freeways Without Futures report also indicates that attitudes are shifting. Context-sensitive design would then become the new status quo. But we are not there yet, and experience warns against counting on this factor winning the day anytime soon in any given location.

At least one, and probably more than one, of these conditions are necessary to transform an automobile-oriented thoroughfare to a complete street with a sense of place. If you don’t have any of these scenarios going for you, consider whether you can bring any of them to bear. If you can’t, consider scaling down the project and using Tactical Urbanism, which is small-scale, temporary, and designed to prove a concept.

So be realistic about the barriers to implementing context-sensitive street design, but also recognize that these barriers can be overcome. In the end, the change is worth the effort.