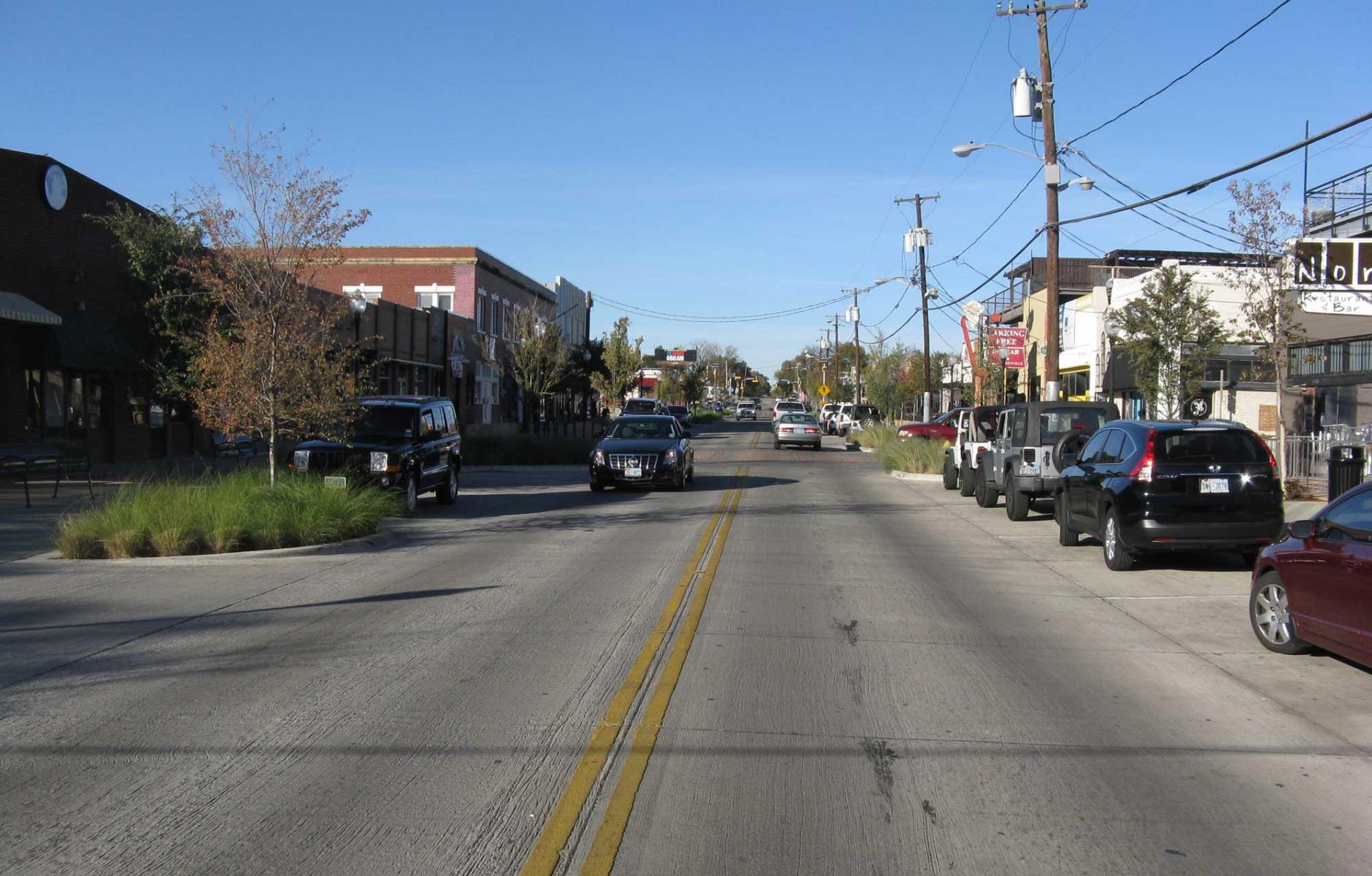 Streetscape improvements have helped bring back an 18-hour-a-day character to the corridor. Crime has dropped and property values have risen.
ROBERT STEUTEVILLE   &nbspDEC. 28, 2017

Greenville Avenue is the main street of a 1920s “streetcar suburb,” Lower Greenville, four miles from downtown Dallas, Texas. The context had become automobile-oriented over the years as space was given over to motor vehicles and the design allowed for speeds uncomfortable to pedestrians. Businesses geared to cars, with significant surface parking, had replaced some of the older mixed-use buildings negatively impacting the main street environment.

To improve the character of the street, four lanes were narrowed to two and sidewalks were enlarged. Bulbouts were installed and on-street parking was placed on both sides of the street, helping to protect pedestrians from moving vehicles. Street trees were planted, narrowing the perceived width of the roadway and contributing to a sense of place.

Brick pavers were installed in intersections and crosswalks, giving the pavement a different driving feel and highlighting the intersections and pedestrian crossing areas. In addition, the project included street furniture (benches) and bike racks. The benches and old-fashioned lighting, with plenty of streets, creates the feel of small, periodic plazas along the corridor. All of this was intended to reinforce a walkable, main street context and to calm traffic, making the area more comfortable to pedestrians. Café seating has contributed to the stronger sense of place and presence of people—outside of cars—on the street.

With Greenville Avenue as a model and the manual as a guide, the city sought to establish a new street design process, policies, and standards that integrated complete streets and stormwater management principles; provide effective and timely opportunities for community stakeholders input on street improvements; and develop a strategy for systematic and phased implementation of complete streets over time.

City Councilmember Angela Hunt and Mayor Pro-Tem Pauline Medrano spearheaded an effort in 2010 to re-envision the neighborhood due to complaints related to the existing land uses, most notably bars and nightclubs. A zoning overlay changed the number of late-night establishments in the area. Additionally, in order to change the district character from a nightlife-oriented area to family friendly, Hunt proposed street improvements, including the road diet and change of streetscape.

One day while playing around in Google SketchUp (a design tool for non-practitioners), Hunt created a vision for how the corridor could change. “I looked at what it could be, and it was amazing,” she says. “It was this pedestrian-friendly, fun little street that could be attractive to neighborhoods and restaurants.” Hunt was able to get money for the street redo from the city’s 2006 infrastructure bond package.

The city used a carrot-and-stick approach—change zoning and permits to get control of the late-night bar scene, and at the same time rebuilt the street to make it more pedestrian friendly. The original four-block makeover was recently expanded to 16 blocks, or three-quarters of a mile.

After completion of the first phase in 2013, the lone bus route that travels down the street, DART Route 1, was diverted east one block to Matilda Street. Many deliveries are now accommodated on side streets, rear allies, or rear parking lots.

The project cost $1.3 million for first four blocks, and $3.67 million for the expansion, funded by an infrastructure bond program.

The posted speed limit on Lower Greenville Avenue is 30 mph. According to Evan Sheets, project manager with the Dallas CityDesign Studio in the department of Planning and Urban Design, anecdotal observations have shown that the effective design speed within the project area has been reduced to 20–25 mph typical average, from 35–40 mph typical average.

Both before and after the improvements, many people have used the Greenville Avenue sidewalks, notably in the evening and night hours. Before improvements, the sidewalks were narrow with little articulation between sidewalk, driveways, parking and travel lanes. Driving lanes on one side of the street were adjacent to the narrow sidewalk, with no separation of people and fast-moving vehicles except a curb.

The widening of sidewalks and more clearly defined travel lanes, streetscapes, and crosswalks has created a much safer pedestrian environment and allowed a wider range of uses that have increased pedestrian volumes in the daytime, afternoon, and evening hours, Sheets says.

Following the street redesign in 2011, Lower Greenville Avenue revitalized with new businesses including two grocery stores, a Walmart Neighborhood Market, a bakery, restaurants, and other firms.

Violent crime dropped nearly 90 percent and all crime dropped 80 percent since the peak—due to factors including more police presence, a different mix of businesses, and more pedestrian activity, according to Advocate, a local publication. Property values in the neighborhood—both land and buildings—rose sharply following the completion of the first phase of the project. Values rose citywide during that time, but they went up more in Lower Greenville.

The success of Greenville Avenue has become a model for how to transform other Dallas neighborhoods and served as a test case for a new city design manual.

The carrot and stick approach of streetscape improvements and policy changes have brought about a change in the character of the Greenville Avenue. An area known for unruly late-night activity has given way to a much more diverse corridor, with activity 18 hours per day.