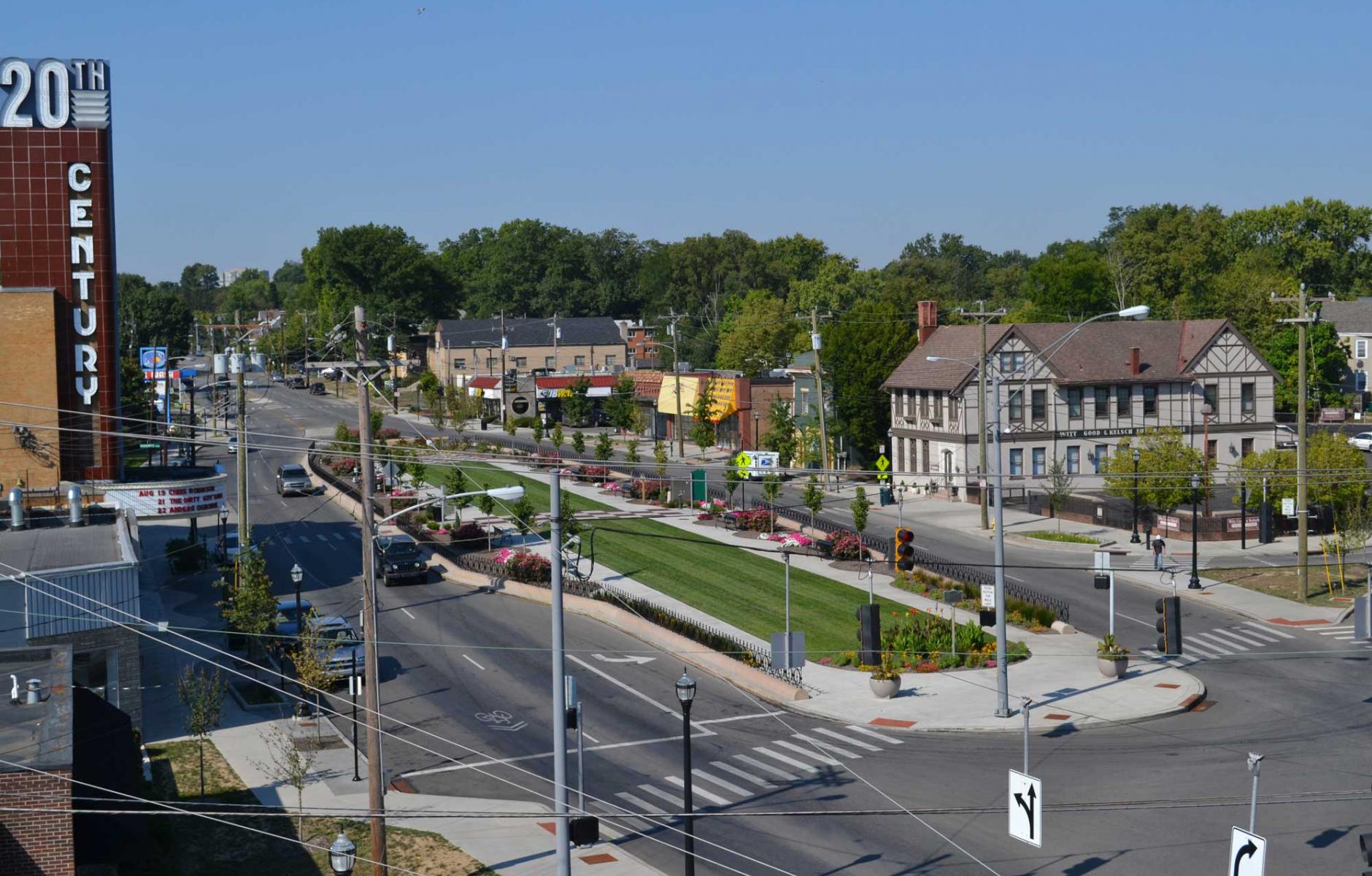 An esplanade park at the center of a Cincinnati neighborhood had been whittled away. Returned to its former glory, the square has revitalized business and boosted safety.
ROBERT STEUTEVILLE   &nbspDEC. 26, 2017

A road diet and traffic calming measures were installed on Madison Road in Oakley Square, the center of an old “streetcar suburb” built in the early 20th Century about five miles from downtown Cincinnati. Madison Road is a major thoroughfare leading from central to northeast Cincinnati.

The heart of Oakley Square is a mixed-use district along Madison Road with a 350-foot-long linear park, Geier Esplanade, in the center of the roadway. The esplanade had shrunken over the years to create more space for through traffic. Changes to accommodate cars and widen the road did not support the original main street environment. The city sought to restore and enhance the business district, which serves as not only a transportation junction but also the economic and social heart of the neighborhood.

Pedestrian safety was an issue, especially at a six-point intersection at the northeast end of the square. The intersection had large turn lanes and confusing signage that made it inhospitable to pedestrians, according to Bryan Williams, an engineer with the city’s Department of Transportation and Engineering. For the recent redesign, streets were realigned, the intersection was simplified, traffic signals were upgraded, and new crosswalks were created. Some of the larger pedestrian crossing distances were reduced with the new design. Small public spaces were created with leftover space in and around the intersection. 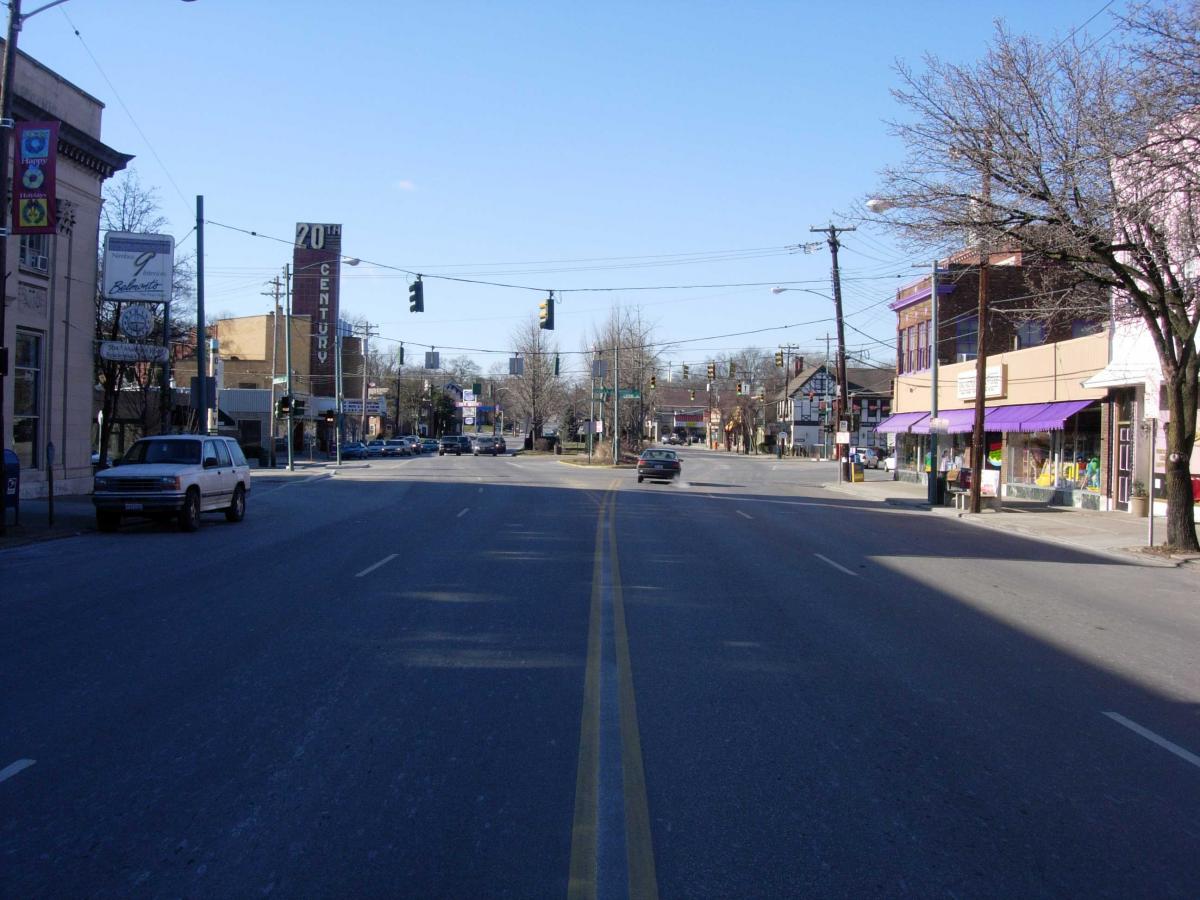 Madison Road looking south toward Geier Esplanade, prior to the reconstruction (Source: City of Cincinnati)

Along with streetscape improvements, the city decided to redesign the entire square. The esplanade was doubled in size to increase its usefulness as a city park (see photo at top of article). Almost a half-acre of impervious asphalt and concrete was converted to green space and pervious pavement. A low protective wall was built around the new public space to separate users, especially children, from the traffic.

New public amenities have been provided, such as new and wider sidewalks through the entire business district and space for outdoor dining.

One travel lane was eliminated and the width of travel lanes was reduced in the square, taking space away from automobiles and giving it to people on foot. After the redesign, the esplanade is used more often and local businesses now utilize the sidewalk for outdoor dining and other activities, the city reports.

Before and after cross-sections. Source: CNU

The project started with the Oakley Square Community Council, which requested funds to look at a confusing intersection at Madison Road, Markbreit Avenue, and Allston Street where numerous crashes had occurred.

That request spurred a more holistic examination and redesign of the infrastructure in this historic neighborhood center. The project cost $3 million, including $1.5 million for roadway and public space improvements, and $1.5 million for water main replacement. The money came from City of Cincinnati Transportation and Engineering funds, community development block grants, and other sources.

Prior to the reconstruction of Geier Esplanade, Oakley Square was compromised by automobile traffic, notes Williams.

The project has vastly improved safety along Madison Road by calming traffic, shortening pedestrian crossings and redesigning a dangerous intersection to improve street geometry and traffic patterns. Crashes decreased 44 percent, including 70 percent in the Madison/Markbreit/Allston intersection. Traffic speeds have slowed in the area to 25 mph from about 35 mph, the city transportation department reports.

The square has seen revitalization of businesses since the work, most visibly with the restoration of the façade of the 1941 Twentieth Century Theater, a movie theater turned special events venue. A former funeral home on Geier Esplanade is also being converted to a microbrewery. New residential construction has begun less than a block from the square, Williams says.

It takes some time for freight operators to get used to tighter turning radii and dimensions. Given that truck traffic often travels through the square to make deliveries, turning radii of the Oakley Square redesign were tested for large vehicles. The right turn onto the square at Markbreit Avenue is at a particularly sharp angle. “It’s tight for a few of the vehicles, but they can make it,” Williams says. Truck drivers had to get used to the newer, tight conditions. One truck hit the new wall of Geier Esplanade. After that, the city installed a heavy post filled with concrete. One truck subsequently hit the post, with little damage to the post and more damage to the truck. Truck drivers have apparently learned their lesson. “It hasn’t been hit since,” Williams says.

A street redesign can also focus on a public space—improving the usefulness of a square. The Geier Esplanade was rescued and restored because of a project that began with pedestrian safety concerns. The public space has helped to restore economy activity in the center.

As new development occurs in the Oakley neighborhood, residents are working on an updated land development code that will encourage mixed-use buildings to define Madison Road and the square.