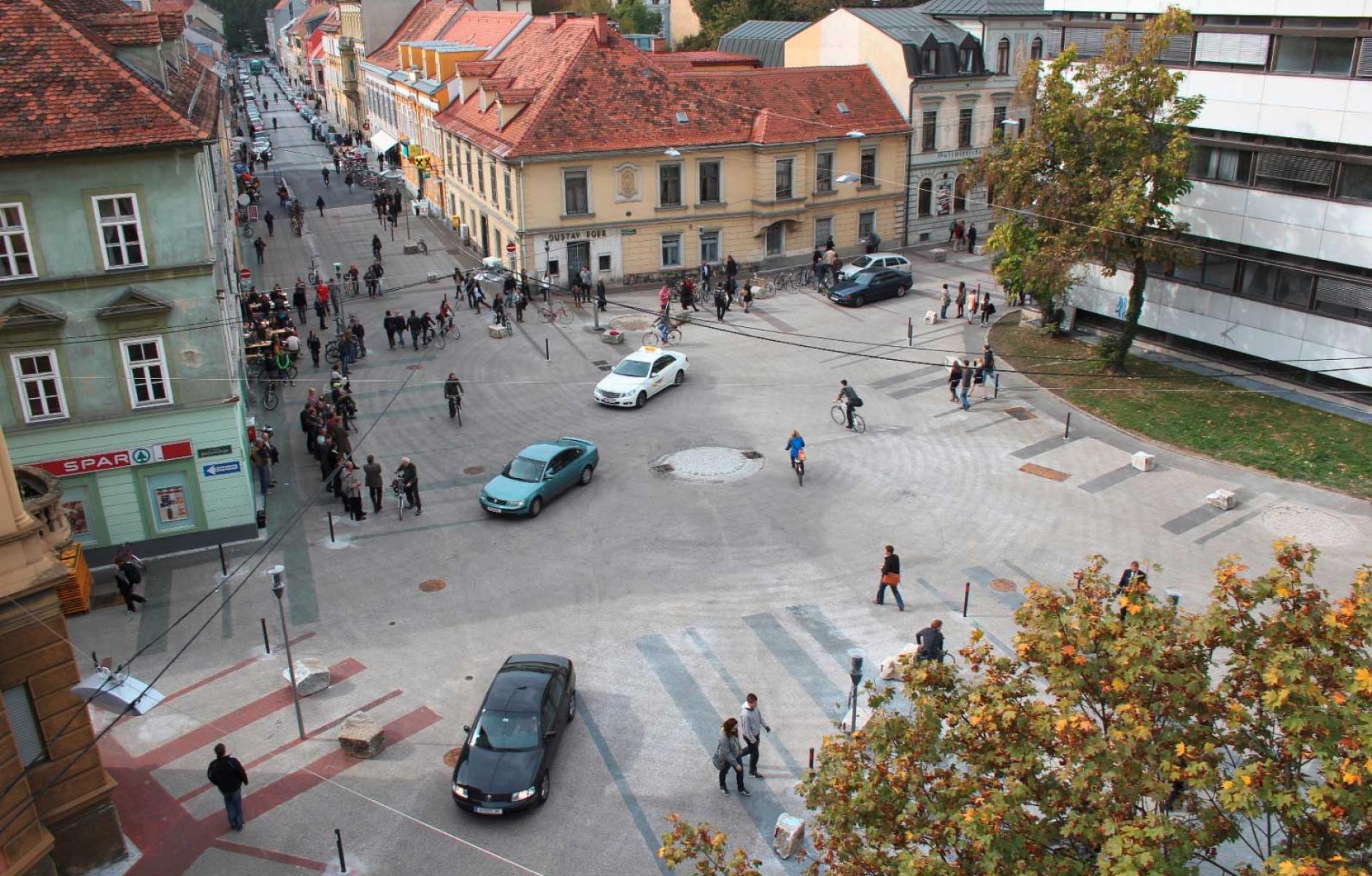 Mingling of people and cars at slow speeds is efficient and pedestrian-friendly, according to a University of Connecticut study.
ROBERT STEUTEVILLE   &nbspFEB. 10, 2016

Pedestrians and drivers experience less delay in “shared space” intersections where vehicles and pedestrians mingle at slow speeds with few traffic regulations, according to a University of Connecticut study. The researchers measured the performance of six shared space intersections in five countries, including one in the US.

“This research suggests that the observed paradox of shared space—that while allowing freer pedestrian movement, shared space also promotes greater vehicle efficiency than conventional control systems—is indeed true. Both pedestrians and vehicles experience less delay at shared space intersections than they do at intersections using conventional controls,” report the authors, Benjamin Wargo and Norman Garrick of the university’s Department of Civil and Environmental Engineering. The study, Shared Space: Could Less Formal Intersections Be Better for Both Pedestrians and Vehicles?, is available through the Transportation Research Board.

In addition to fewer regulations and little separation between people and cars, the intersections differ from conventional roadway design in substantial ways. Buildings are close to the street—sometimes abutting the vehicle path. Obstacles and deflections—such as posts, bollards, fountains, monuments, trees, or public spaces—are located in or near the roadway, demanding driver attention and slowing vehicle speeds. Traffic lanes are narrow. Pavement is sometimes rough.

Remarkably, pedestrians were able to navigate these busy intersections with an average delay of less than one second, the study found. “The pedestrians at the shared spaces showed little or no hesitation before crossing. The low average pedestrian wait times are likely a function of the vehicle speeds, but they also depend on vehicle volumes at the sites,” the authors note.

A literature review found no evidence of reduced safety in shared space intersections in prior studies. One of the six intersections examined—Laweiplein, Netherlands—was the subject of a prior study, and “researchers found dramatic reductions in traffic accidents after an intersection was converted to a shared space.”

The intersections employed a range of shared space techniques. The one US example, Uptown Circle in Normal, Illinois, had the fewest elements of shared space design. Uptown Circle, part of a new urban revitalization, features a circular park in the middle of a large traffic roundabout. The park is a popular public space. Surrounding sidewalks have full curbs, unlike the other shared space intersections. Uptown Circle featured the highest average traffic speeds—10 miles per hour—of any of the examples. The pedestrian and vehicle volume is relatively low—280 pedestrians and 81 vehicles per hour—compared to the other examples. The pedestrian delay at Uptown Circle is less than a half second, while the vehicle delay is 4 seconds. A signalized intersection at this site would have a predicted delay of 15 seconds.