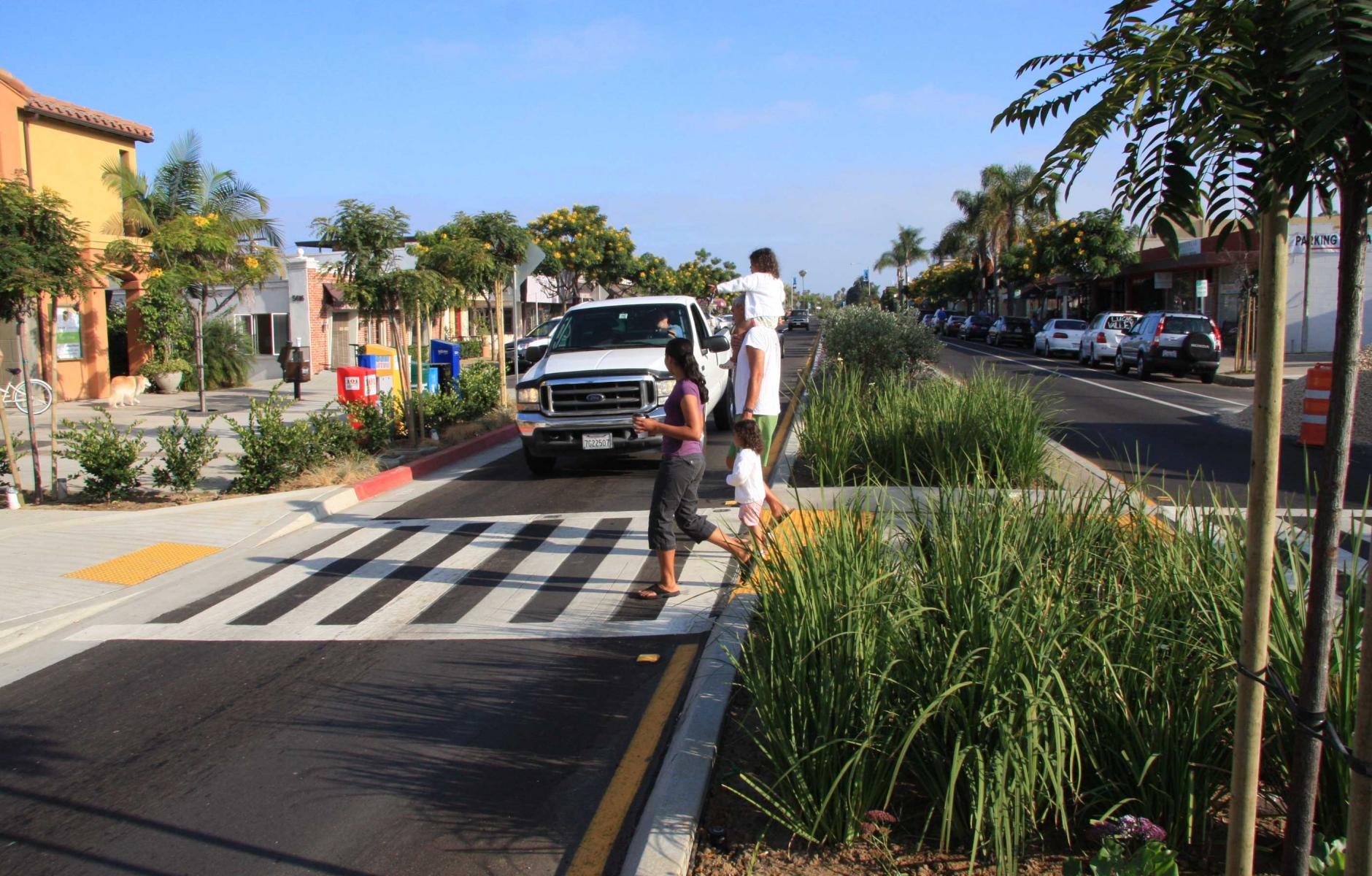 A family on a crosswalk on La Jolla Boulevard. Source: Dan Burden
Streets

A breakthrough design on La Jolla Boulevard in San Diego cuts crashes by 90 percent and gives local business a shot in the arm.
ROBERT STEUTEVILLE   &nbspJAN. 10, 2018

Note: This case study will be discussed at CNU 26 in Savannah. It was written for the Institute for Transportation Engineers new book Implementing Context Sensitive Design on Multimodal Corridors, funded by the Federal Highway Administration.

The reconstruction of a section of La Jolla Boulevard and traffic calming on nearby streets yielded substantial safety benefits and spurred economic development in Bird Rock, San Diego.

The project was designed to transform a wide, automobile-oriented thoroughfare to a pedestrian-friendly, neighborhood center.

Travel lanes were reduced from five to two while adding five modern roundabouts, improved sidewalks, medians, landscaping, and increased angle parking. Traffic calming measures were installed on less busy side and parallel streets to avoid potential traffic diversion. Parallel-street improvements included installation of four traffic circles—designed like roundabouts but lacking splitter islands on the approaches. Diagonal parking is included on the west side of La Jolla Boulevard, and parallel parking on the east side.

Pedestrians once had 70 feet of pavement to cross at intersections. With the roundabouts, they now cross 12–14 feet of pavement at a time with refuge islands in the middle (see photo at top). Pavement flashers, activated by pedestrians, remind motorists to stop and yield for people on crosswalks.

Substantial care went into the landscaping—the shrubs, flowers, trees, and other plants in the center median, the roundabouts, and both sides of the streets including the bulbouts. “If this landscaping wasn’t here,” Dan Burden, walkability consultant on the project, says, “we’d probably lose a third of the effectiveness.”

The design addressed issues identified by the community: A shortage of parking, lack of comfortable public spaces, and financial stagnation of area businesses, notes restreets.org. “The wide, heavily trafficked road functioned as a barrier that divided the neighborhood physically and psychologically.”

A parallel street, La Jolla Hermosa, is the designated bicycle route and includes bicycle lanes. However, due to the 15 mph design speed of the roundabouts and traffic calming, many bicyclists feel comfortable riding with traffic on La Jolla Boulevard or on Chelsea Street, another traffic-calmed parallel street, the city reports.

The planning began in 2000. The Bird Rock Community Council surveyed residents and identified the safety of pedestrian crossings as a concern, after which a series of town hall meetings took place on potential traffic calming measures. The project had a champion in city government named Scott Peters who was council president at the time. In 2001, a heavily-attended community meeting identified lingering concerns, including cut-through traffic and loss of roadway capacity.

The city hired a walkability consultant, Dan Burden, who led a series of community workshops leading to consensus on a general traffic-calming approach. Burden then conducted a three-day, hands-on, public design charrette to work out a vision for the thoroughfare. A comprehensive traffic management plan was developed and adopted in 2003, addressing community concerns.

City council approved the project in 2004 without controversy, and the detailed engineering and design began. A roundabout design specialist, Michael Wallwork, worked with city transportation engineers to assist with the construction plan. Wallwork added about 40 traffic calming devices in addition to designing the roundabouts in detail. After three years of detailed work like drainage and landscaping and securing a variety of financing sources, the project began construction in 2007.

Phase one consisted of traffic calming throughout the neighborhood—especially on a parallel street, La Jolla Hermosa. Phase two included the construction of roundabouts on La Jolla Boulevard. The developer of a large condominium project built two of the roundabouts.

As a result of the roundabouts and traffic calming, speeds were reduced from 40–45 mph to 19 mph, according to city transportation engineers. “The once busy boulevard has been transformed into a slow-paced street with roundabouts, landscaped street dividers and diagonal parking,” notes the LaJolla Light

Traffic crashes fell by 90 pecent. The project has helped revitalize La Jolla Boulevard, acting as a catalyst to several new mixed-use developments, a 139-unit condominium development, and a major drugstore.

“Motorists,” Burden reported in The San Diego Union- Tribune in February 2017, “understandably dreaded this change before it was made. But they found that instead of waiting 24 seconds for a pedestrian to cross 70 feet of road, they now only wait 3–4 seconds, or don’t have to wait at all. Businesses that feared the loss of customers arriving in cars actually improved their trade. … Today motorists are getting to their destinations in less time, because they aren’t stopping.”

The plan originally called for five full-sized roundabouts, which measure at least 100 feet in diameter, including the travel lanes, on La Jolla Boulevard, but when the city began detailed design, it was discovered that additional right-of-way was required for three of the roundabouts. With the advice of the roundabout practitioner, the city opted for three mini-roundabouts, about 85 feet in diameter, which required no land purchases. This saved money and time and avoided controversy. The smaller roundabouts allow all kinds of vehicles to pass through although transit buses cannot make U-turns, the city reports.

The phased construction allowed deficiencies to be addressed in the first phase, with improvements in later phases. The reconstruction and calmed traffic sets the stage for buildings to actively engage the street.

The roundabouts take some getting used to, and not long after installation citizens called city hall to complain about large vehicles rolling over the roundabout aprons but Peters explained, the wide aprons are designed so that large vehicles can go over them without difficulty. “It was intentional,” Peters said. “We planned every inch of them so they would accommodate things like fire department engines, making sure they would convey traffic.”

The corridor is a bus route and the site of many truck deliveries. There are back alleys on a portion of the corridor, but in other locations trucks still must deliver in front. At those times, cars have to wait. “That is one of the sacrifices that was made,” says Mike Arnold, traffic engineer and project manager with the city. The street network and parallel thoroughfares provide alternative routes when necessary.

Resurfacing is trickier with the new streetscape and must be carefully planned. Traffic is moved to adjacent streets and much of the work is done from 8 p.m. to midnight. La Jolla Boulevard provides a model for how to do context sensitive streets, including roundabouts, in the San Diego area—prior to this project, few had been built in the region.