Since joining CNU, Executive Director Rick Cole has taken the opportunity to connect more deeply with our Chapters with visits, tours, and speaking engagements. Connect here to have Rick come visit your Chapter. To date, Rick has visited the following Chapters:

After barnstorming through Michigan during the last week, I can say: plenty! Our Chapter there is actively engaged with the most pressing challenges facing American cities today.

Last Friday morning began with a productive meeting of Michigan Chapter leaders with Detroit’s new Planning Director, Antoine Bryant (who joined CNU as a student at Cornell).  Then it was off to Archive Design Studio for virtual meetings with four members of the Windsor City Council (just across the Ambassador Bridge in Canada) who are crusading for walkable neighborhoods -- and then with four women who are pioneering infill development across Michigan. A light rain lifted for an outdoor meeting to talk code reform with local planners in the redesigned Campus Martius in the heart of Detroit’s rebounding Downtown. Richard “Murph” Murphy of the Michigan Municipal League brought freshly-printed copies of “Commercial Corridors and Shopping Centers” which follows “A Users Guide to Zoning Reform” -- both co-produced by CNU as part of our Project for Code Reform.

Just enough time for a quick bite at Detroit Masala before the second night of the Better Cities Film Festival, focused on “The Next Detroit,” with a series of documentaries including the powerful story of General Motors taking down hundreds of homes in Poletown for a factory that recently closed. Saturday dawned with Chapter Board member Sharon Woods showing off the dozens of murals surrounding the Eastern Market. From there, Mark Nickita FAIA (and a Charter signatory) led tours of the Woodward Corridor (including the vibrant Downtown and Rail District of Birmingham where he was Mayor) and Downtown Detroit.  Chapter Chair Adam Cook set up a tour and meeting with the Community Development Director in Hazel Park, where one of our CNU 24 Legacy Projects has helped spur revitalization of the business corridor). Soon it was time for the second night of the Better Cities Festival featuring “The Place That Makes Us,” a riveting feature documentary about the young people who refuse to give up on their hometown of Youngstown, Ohio.

If you want to see the impact of New Urbanism on the lives of Americans, it would be hard to find two better case studies than Middleton Hills and Westlawn Gardens. I toured both in my whirlwind visit to Wisconsin.

Middleton Hills was developed by Marshall Erdman. In the early Nineties, he hired DPZ to master plan a 150 acre site in the town of Middleton (outside Madison, Wisconsin’s state capital). Fully built out, it encompasses more than 400 single family homes, townhouses, apartments and live/work units. A grocery store, restaurants, shops and small businesses occupy 100,000 sq. ft., integrated into the neighborhood. An existing wetlands was preserved as a beautiful scenic and recreational amenity.

Westlawn Gardens is nearing completion by the Milwaukee Housing Authority under a master plan done by Torti Gallas. At final build-out, nearly 1000 mixed-income units will replace 750 aging public housing units that previously occupied the 75 acre site. There’s an active community center, parks and thriving community garden, along with a future site for commercial development. City Council President Cavalier Johnson, who represents the area, calls it the “jewel” of his district.

These aren’t utopian experiments -- just remarkably handsome, livable neighborhoods that residents call home. Yes, visionaries planned them – but people like you and me brought them to life. Each illustrates how we can apply the architecture of community to suburbs and inner cities alike. Both combine timeless ways of building with contemporary environmental and social principles to make places people love.

The rest of my visit was crowded with equally inspiring experiences arranged by our Wisconsin Chapter, headed by Chris McCahill. I lectured at both the Madison and Milwaukee branches of the University of Wisconsin. I joined planners, architects, developers, civic and elected leaders for a tour and discussion of Madison’s East Washington corridor in the formerly industrial Cap East District. A planned Bus Rapid Transit route is sparking major new residential and commercial infill. In Milwaukee, I participated in a public tour (arranged by former CNU staffer Steve Filmanowicz and CNU member Gabriel Yeager) of the Deer District (around the Bucks’ arena) and the nearby Riverwalk. I spoke with 30 Christian leaders at a meeting organized by Chapter boardmember Joyce Tang Boyland to discuss the role churches play in inner city community building. I outlined CNU’s mission at a workshop for 40 local non-profit leaders that “folded in peacebuilding, consideration of mental models and spiritual/personal transformation into a conversation about city building,” as organizer and Chapter boardmember Anna-Marie Opgenorth described it.

Last weekend I was in Texas speaking to a City Council/Planning & Zoning Commission workshop for the City of Farmers Branch, a growing suburb adjacent to Dallas. Farmers Branch is kicking off an ambitious Comprehensive Plan effort to guide future development and improve the quality of life in their community. I encourage planning firms to review the link on our website to the Farmers Branch Request for Proposals for assisting them in this effort. While in Texas, I met with members of our Central Texas Branch who provided me a fascinating tour of Downtown Austin as well as the redevelopment of the old Mueller Field. See my reflections on the Mueller development and the impact of New Urbanism posted this week on our Public Square blog. 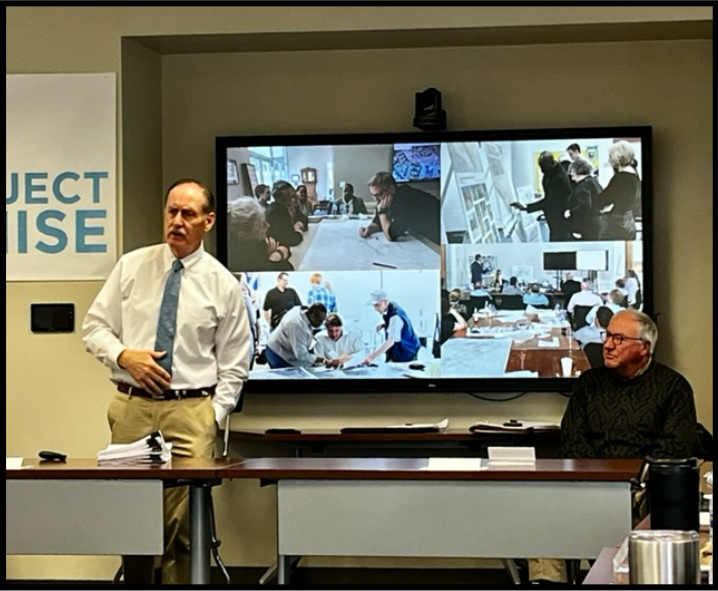 I spoke virtually to our Florida Chapter during their 2021 Summit, held this year in West Palm Beach. Moderated by Victor Dover of Dover Kohl, my topic was “The Prime Directive: The Opportunity & Responsibility for New Urbanism to Create Cities that Work for Everyone.” View a copy of my presentation here.

I arrived in Tampa early Monday morning and since then have been barnstorming the north-central half of our fastest growing state. CNU Board Treasurer Frank Starkey and Congressional Black Caucus of the New Urbanism Co-Chair Bruzenskey Bois shepherded my visit to Longleaf and New Port Richey where I spoke to local officials and citizens. HDR colleagues Debra Hempel and Steve Schukraft toured me via streetcar and foot through Tampa’s historic Ybor District and the dramatic Water Street and Channel District infill new developments. That afternoon I spoke to a standing-room only session on community remediation and revitalization at the American Association of Blacks in Energy.

Tuesday night I dined with our Florida Chapter CNU-Tampa Bay leaders and Wednesday night with the Orlando leadership. Wednesday morning began with a tour of the dramatic home-grown revitalization of historic Winter Haven’s downtown. Then it was off to Celebration, Disney’s experiment with new urbanist concepts with architect Floyd McCollum, one of the original residents. The afternoon was devoted to getting a walking and driving tour of Winter Park with Mayor Phil Anderson, CNU-Florida Chair Rick Geller and Rollins College Professor Bruce Stephenson. Then it was walking through Baldwin Park, a former naval base turned into a thriving walkable infill community of 12,000 residents, followed by a walk through Winter Garden’s thriving Downtown, a long drive to Haile Village outside Gainesville and an even longer drive to Seaside where I write from this morning.

Florida’s kaleidoscope of diverse ideas, perspectives, case studies and problems pose a fascinating challenge for our movement. No other state has as many New Urbanist practitioners and model projects – yet much of the state seems hellbent on paving paradise with placeless sprawl. It’s the same everywhere – just much more intense given the rapid growth and polarized politics of the Sunshine State.

Two immediate lessons stand out even as I continue to absorb all that I’m seeing and learning.

The first is that the action in our movement is intensely local. Whether it’s rewriting codes, revitalizing decimated town centers, tackling the challenge of economic displacement and cultural erasure or figuring out how to build authentic and inclusive community, it’s the work of our chapters and our members where New Urbanism has its greatest impact. Here again, it is similar to what I’ve seen in the other state’s I’ve visited – only more so. Battling the Wall Street-fueled juggernaut of cookie cutter, auto-oriented real estate “development” with an alternative model of human-scaled, walkable, sustainable urbanism is happening in real time in real places. Sometimes we win, often we lose, usually we land somewhere in the middle. But our members are passionately engaged in a critical struggle for the future – and soul – of our neighborhoods, towns and cities in Florida and nationwide..

The second lesson is that New Urbanism happens across every scale, from rehabbing (and leasing to a local business) in a single building in a disinvested downtown like New Port Richey -- to turning bleak parking lots into millions of square feet of new mixed use housing, offices and retail in a booming central city like Tampa. Leadership can come from almost anywhere -- from hometown investors in Winter Haven or a corporate giant like Disney; from visionary city planners, academics, design professionals, elected officials or community citizens. None of what we build or achieve is perfect -- it almost always involves some sort of design or political compromise, but it stands out like night from day in contrast to the crudscape around it.

No matter what you’ve read or thought about Florida’s history, politics or climate – this is a state where our movement is vibrant and making an impact!

The first hundred years was a “fantastical saga” of more booms – and frequent busts. Along the way, city fathers made some disastrous blunders. OKC was sprawl on steroids, becoming the largest city in land area in the entire country. OKC pursued “urban renewal” with a vengeance, decimating both the Downtown and thriving Black neighborhoods. But over the past three decades, a series of visionary mayors have led a remarkably consistent turn-around that carries inspiring lessons for us all.

The spark for the transformation has been a series of four tax measures (called Metropolitan Area Plans or MAPS). They financed dramatic investments in the city’s Downtown; public schools; cultural, sports and entertainment venues; parks; trails, sidewalks, bikelanes and a streetcar line; neighborhood youth and senior centers; homeless services; an “Innovation District” – and much more. The broad civic coalitions backing these ambitious investments have forged a “can do” pride among the citizenry – transcending the sharp polarization that is so commonplace today. 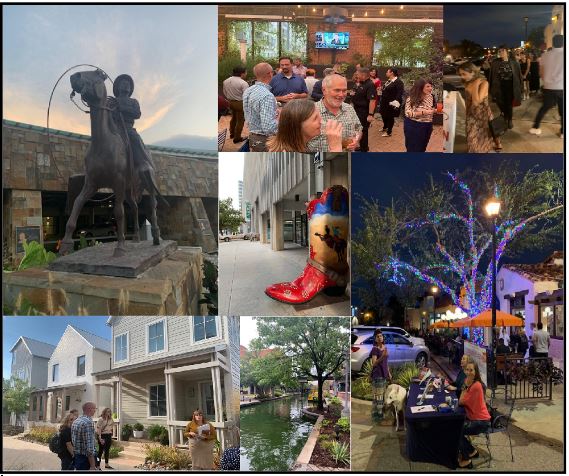 These catalytic projects and programs have sparked equally impressive private initiatives. We toured Eastpoint, a 2021 Urban Land Institute Global Award for Excellence winner.  The 40,000 sq/ft redevelopment project brought a grocery store and health clinic to a neighborhood without either – and created space for another eight Black-owned businesses. Each of the tenants secures a 15% ownership on signing their lease. We also explored the Wheeler District, a former airfield master-planned by Dover, Kohl and developed by Blair Humphreys. The 150-acre walkable, bikeable neighborhood boasts a mix of uses and range of housing types. Also on our tour was the Jewel Theater, one of the exciting Legacy projects we’ll be pursuing (much more on that later.)

The energetic Local Host Committee put on an evening reception at The Jones Assembly and a morning gathering sponsored by ULI-Oklahoma in Kerr Park, introducing us to more than a hundred enthusiastic OKC professionals.