CNU 24 will be the most immersive, and dispersed, Congress ever. We will be using several unique spaces across multiple venues and locations over the four days of the Congress. Learn about the venues below. 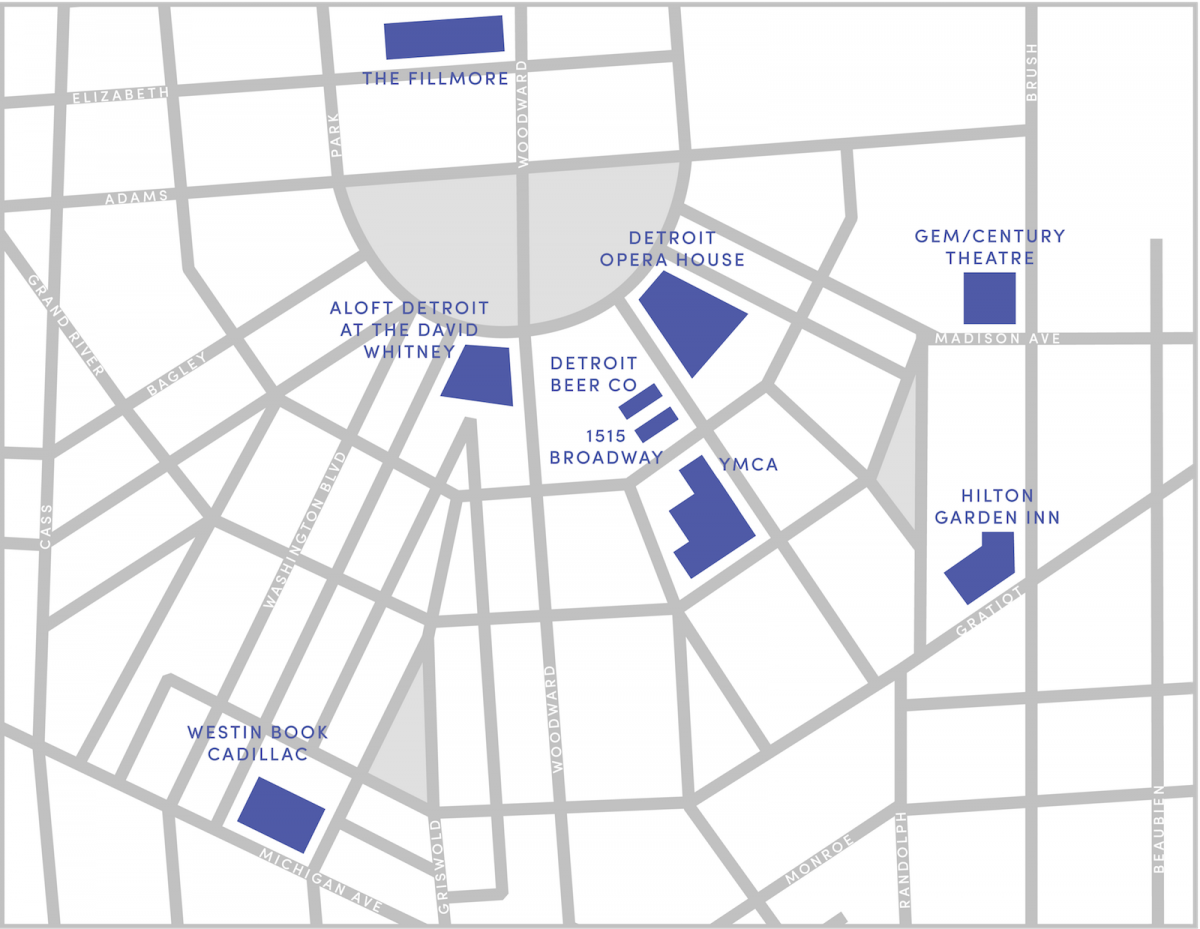 Detroit’s premier destination for a special night out, the Detroit Opera House is a stunning 2,700-seat venue in the city’s Grand Circus Park Historic District. Designed by prominent Detroit architect C. Howard Crane, it opened in 1922 as the Capitol Theater and changed ownership several times before closing in 1985. In 1996, it reopened in all its original glory after an extensive restoration project. As a world-class performance venue, the opera house has hosted stars such as Louis Armstrong, Luciano Pavarotti and Roy Orbison.

The Historic Gem and Century Theatres and Century Grille have a history of breaking records. Built in 1903 by the Twentieth Century Association, a group of civic and philanthropic minded women, the Century Club set a precedent even before a brick was laid, holding Detroit’s first building permit issued in a woman’s name. The building opened at the corner of Columbia and Witherell streets on December 26, 1903. The Twentieth Century Club disbanded during The Great Depression and the Little Theatre and Century Club were lost to foreclosure. The Century Club building operated as a restaurant under various names until the 1950’s when it was known as The Russian Bear.

Around 1980, developer Charles Forbes purchased the entire building, bringing the Gem and Century under single ownership again. In 1990, Mr. Forbes began a complete restoration of the Century Club facility after a record-breaking five-block relocation of the entire structure, and the building is one of Detroit’s most intimate and charming venues today.

In 1927, the Century Club completed construction of its adjoining building, the Little Theatre of Detroit (now the Gem Theater). From the beginning, the Little Theatre broke new ground, opening with the first foreign film shown in Detroit, Cyrano De Bergerac. The small theatre continued to show artistic and foreign films until the Great Depression when The Twentieth Century Club disbanded and the Little Theatre and Century Club were lost to foreclosure. The Little Theatre changed names, ownership, and uses, operating as a movie theatre (Rivoli, Drury Lane, Cinema and Europa), a repertory theatre (The Vanguard) and finally as an adult movie and burlesque theatre (The Gem) until its closure in 1978 until developer Charles Forbes purchased the entire building and restored both Century and Gem Theatres in 1990.

The YMCA of Metropolitan Detroit is a non-profit organization dedicated to strengthening the foundations of community through youth development, healthy living, and social responsibility.

The Fillmore Detroit is a beautiful, historic venue located in the heart of Detroit's entertainment district.Originally opened in 1925 as a movie house, this elegant venue has been renovated to offer guests a unique concert and special event experience. As you walk through the grand lobby of The Fillmore Detroit you are embraced by the nostalgia of the original Fillmore chandeliers and the history they represent. Within the theatre, the 80 foot ceiling is flanked by the famous chandeliers as well as a hardwood dance floor. As you walk down memory lane, catch a glimpse of the infamous rock poster wall featuring a small sampling of the endless artists who have graced this magnificent stage.

St. Clair College is proud of its Centre for the Arts facility which is located in downtown Windsor. Its stunning waterfront location, overlooking the Detroit skyline, is the perfect setting for weddings, catered events, and trade shows. This multi-use facility is also extremely popular with our post secondary students who come to this campus to study in the fields of Media, Art and Design and Hospitality. Another feature attraction of the Centre is the professional, 1,200 seat Chrysler Theatre that is home to the Windsor Symphony Orchestra, numerous performing arts groups, and provides a perfect venue to support our Music Theatre Performance and Entertainment Technology student productions.

Albert Kahn, a noted Detroit architect of the day, built three buildings on the 15-acre estate: the Manor House, the Coach House, and the Gate House. Designed in the 16th Century Tudor-Jacobean style of an English manor house, the main building was started in 1904. No expense was spared in the materials or labour. The exterior of gray limestone, quarried in Amherstburg, was hand-cut at the Willistead work site by Scottish stonemasons specifically imported for the project.

Willistead Manor was built in 1906 for Edward Chandler Walker, the second son of Hiram Walker, founder of the world-renowned distillery. Edward and his wife, Mary Elizabeth Griffin Walker, moved into Willistead Manor in 1906. In naming the estate, Edward commemorated his older brother Willis, who had died some years before.

In 1921, five years after Edward’s death, Mary Walker and the heirs of the Edward Chandler Walker’s estate deeded Willistead Manor to the town of Walkerville. Upon amalgamation of the Border Cities in 1935, the City of Windsor inherited this magnificent gift from the past.