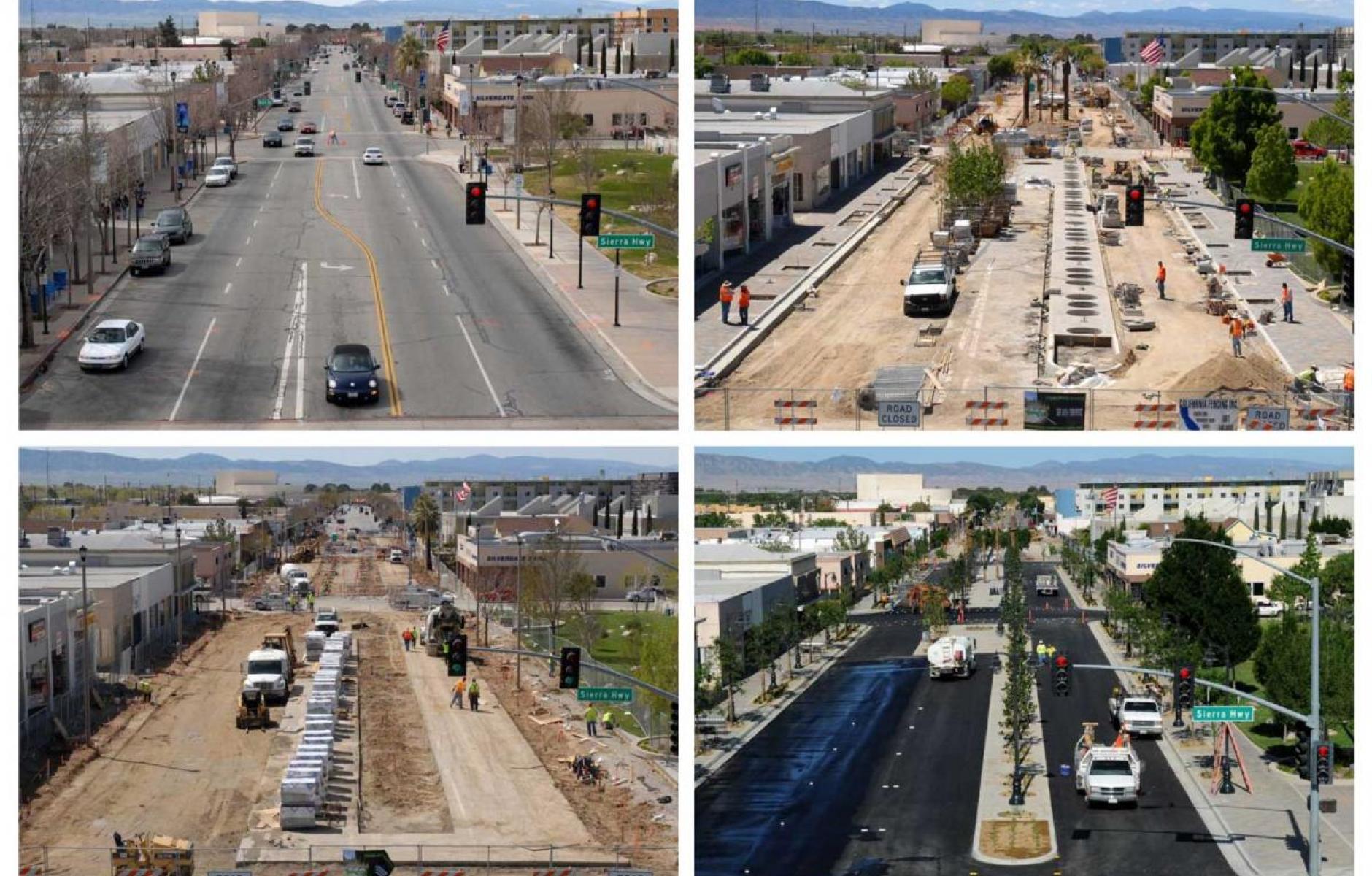 Seven stroads that have been converted to streets

There are thousands of stroad sections in the US. Transforming a good number of them is important to to the goal of improving quality of life and mobility in cities and towns.
ROBERT STEUTEVILLE   &nbspJUN. 21, 2022

A “stroad”—a term coined by Charles Marohn of Strong Towns—is a thoroughfare that combines the complexity of a street with the design speed of a road. Stroads include the most dangerous thoroughfares in America, and they don’t serve the functions of a street or a road very well.

There are thousands of stroad sections in the US and transforming a good number of them is important to to the goal of improving quality of life and mobility in cities and towns.

Here’s a list of seven places where stroads have been successfully converted to streets.

Of all of the stroad-to-street conversions in the US, Lancaster BLVD may be the most admired. A five-lane arterial was converted to two lanes with a central landscaped “ramblas” that is inspired by the famous boulevard in Barcelona. Diagonal parking is placed in the center, but the median also includes crossings and small public spaces. During seasonal festivals and regular events like a farmers’ market, the ramblas is entirely given over to public space. Here’s what we wrote about Lancaster BLVD in Public Square:

“This strikingly original street redesign had an enormous economic impact on Lancaster, a suburban city in the desert of southern California. A street that previously held minimal attraction to pedestrians, and had little sense of place, suddenly became the social, cultural, and economic heart of the city.”

For all its attractiveness, Lancaster BLVD was lean, both in cost and time of construction. Existing curbs were maintained and the entire nine-block-long, $11.5 million project was completed in eight months. It spurred an impressive amount of economic development.

There are two kinds of stroads: The first kind begins as a street and then is converted to a stroad through widenings and other changes. The second was originally designed as a road (or suburban stroad), and gains complexity through development. Most of the projects on this list are the former, Main Street in Providence is the latter—and the second kind may be more difficult to transform into a street, because there is not even a distant memory of a street.

In this traditional neighborhood development (TND) in Huntsville, a five-lane suburban artery has been converted to a Main Street with on-street parking and a center tree-lined median.

The transformation of the thoroughfare is a pioneering change for this suburb. The City of Huntsville gave back the outer two lanes for on-street parking, and after over a decade of battling with the fire marshal, the middle turn lane was rebuilt as the tree-planted median—completing the vision of an urban boulevard.

The city narrowed the commercial street from a 5-lane stroad into a 3-lane street with parking and nice streetscape features. The mile-long project cost $7.1 million.

“It’s become a unifying signal for our neighborhood,” Taylor Phillips told the Spokesman-Review. “We have folks that are really coming together, because now they feel safe to go up and down Monroe. They feel like it’s welcoming. They feel like it has a place for them.”

The effort was not just a wonderful road diet, but the process won over local opposition, says Dean Gunderson, a planner commenting on Pro-Urb, a listserv for urbanists. The city split the construction into two contracts so that it could be finished sooner, and worked with the Small Business Administration to provide support for businesses. A grant program helped businesses to improve their facades, magnifying the impact.

Travel lanes on this stroad in Bird Rock, San Diego, were reduced to two from five, with modern roundabouts calming traffic and allowing for the elimination of turn lanes at intersections. On-street parking was added to both sides, including diagonal parking on the west side, closest to the beach.

The traffic count remained approximately the same before and after the changes—about 22,000—and yet La Jolla Boulevard has been transformed to a walkable, pleasant street from one that was hostile to pedestrians. Average speeds were reduced from 40-45 mph to 19 mph. Noise levels dropped 77 percent and retail sales rose 30 percent. Traffic crashes fell by 90 percent.

Travels lanes on a 1.9-mile stretch of US Route 62, which goes through the center of Hamburg, New York, were shrunk from 21-feet wide to 10-feet wide. That extra asphalt was used for on-street parking and 4-foot painted buffer lanes between the parking and travel lanes. Roundabouts were installed in four locations, slowing traffic to 15 miles per hour at main intersections.

These changes made Main Street a “main street” once again, where businesses and street life thrive. Completed in the summer of 2009, the Route 62 project is widely credited with catalyzing the revitalization of the village—working in concert with other efforts. Concurrently with the reconstruction, New York State Office of Community Renewal provided $800,000 in matching Main Street Program grants for façade improvements—leveraging more than $7 million in private investment in 33 buildings.

Four lanes of traffic were reduced to two on this busy thoroughfare separating the campus of North Carolina State University from city neighborhoods. The rebuilt thoroughfare is more appropriate to the context of the adjacent walkable neighborhood that is lined with institutional, commercial, and residential buildings. Two roundabouts were installed. A central median was built.

The road diet reduced crashes along the thoroughfare, which had been listed as the most dangerous roadway for pedestrians in the state. It also improved business along the street, where on-street parking was doubled.

Before the development of Seaside, Florida, Rte. 30A was designed to enable cars to go 50 to 55 miles per hour, and yet the road still provided beach access along 18 miles of Gulf Coast. This highway traveled through the heart of where developer Robert Davis built a town, starting in the 1980s.

At the time, Walton County had little in the way of government planning oversight, and Davis gradually took over the shoulders of the highway for on-street parking and landscaping. Development fronted the street on both sides, and pedestrian activity steadily grew. All of these changes created friction—so that by the 1990s, cars naturally slowed to 20 miles per hour, or less, inside Seaside. Seaside has a lot of congestion today, including people on foot and bicycles constantly crossing 30A. On busy days, cars go through Seaside today at a steady snail’s pace.

Other new towns have been built along 30A, and a bicycle and walking trail has been built along the thoroughfare. The county is now planning a transit system, possibly using autonomous vehicles.