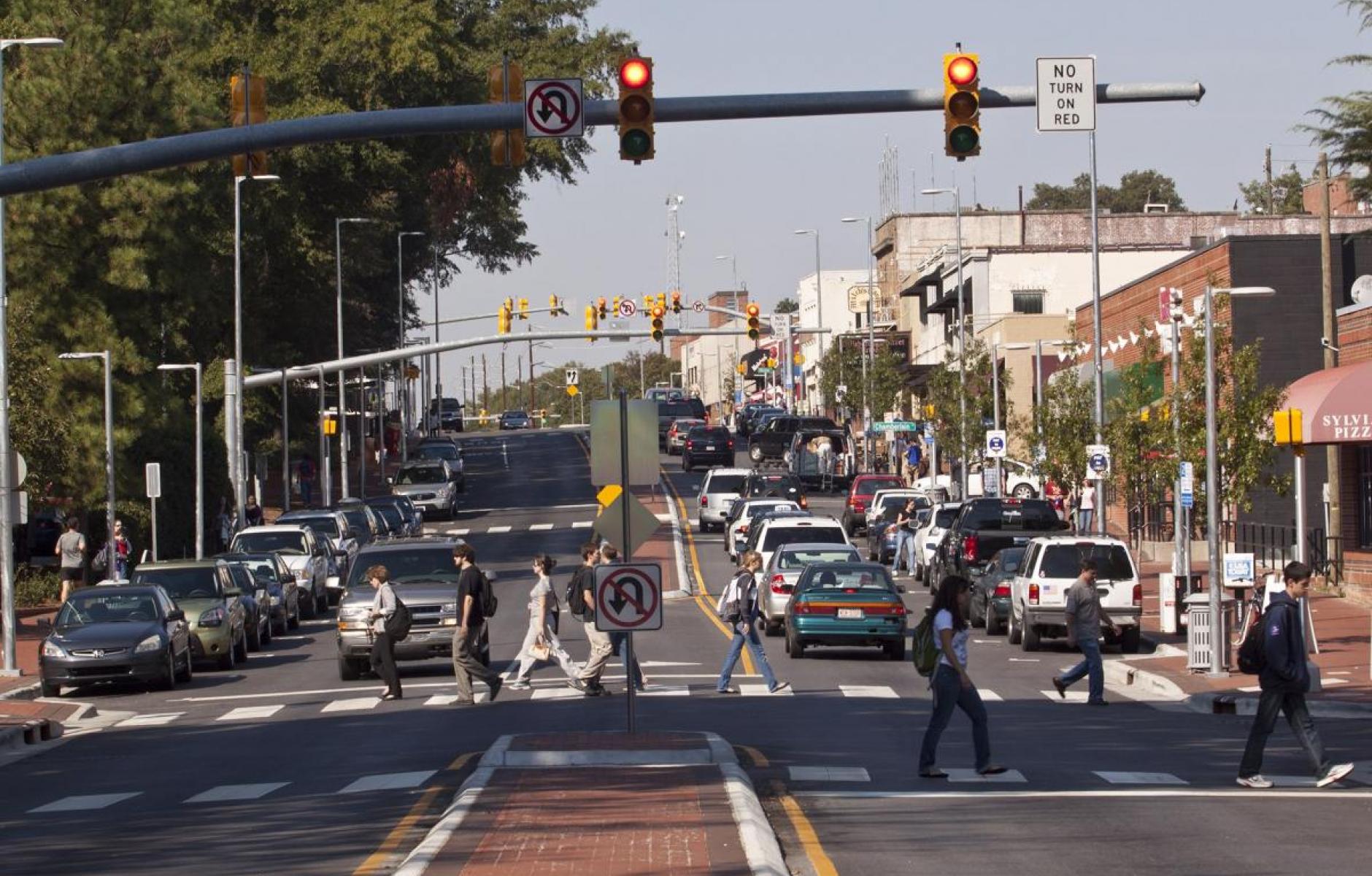 A pedestrian fatality spurred a transformation of a thoroughfare in Raleigh, linking a college campus to neighborhoods.
ROBERT STEUTEVILLE   &nbspFEB. 5, 2018

A wide suburban arterial road separating the campus of North Carolina State University from city neighborhoods was transformed through traffic-calming techniques (see photo above). The rebuilt thoroughfare is more appropriate to the context of the adjacent walkable neighborhood that is lined with institutional, commercial, and residential buildings.

A pedestrian fatality in 1997 created a public outcry that galvanized a group of community leaders, and that initiative a lengthy process leading to eventual redesign of Hillsborough Street. A neighborhood group, the Hillsborough Partnership, organized a design charrette attended by 500 people, which identified high pedestrian crash rates, traffic congestion, a lack of on-street parking, and a lack of bicycle infrastructure as priority problems to be solved, North Carolina Department of Transportation (NCDOT) reports.

The charrette led to a feasibility study in 2001, and from that point the project moved forward slowly while funding was identified and an environmental impact study was conducted.

At least a dozen partners lined up behind the street project, pushing for eventual approval. First phase construction began in 2009 was completed in 2010. A second phase was later implemented.

“You must have a big vision, but you need to break it into doable projects. We started with one roundabout, and then moved forward to the next 4–5 blocks,” says retired Raleigh Planning Director and neighborhood resident George Chapman.

The project cost $9.22 million in two phases that came from a city transportation bond referendum.

The street was listed in 2007 as the most dangerous in the state for pedestrians, who cross by the hundreds in peak hours because of the university campus on the south side. Estimated cost of crashes during a three-year prior to the project was $12.6 million. Vehicles often exceeded the speed limit of 35 mph, according to the 2001 feasibility study. Now motorists slow at roundabouts to 15–20 mph, NCDOT reports, and maintain a moderate speed between the roundabouts.

“The improvements along Hillsborough Street have changed interactions between motorists and pedestrians, slowing down motorists and encouraging higher frequencies of pedestrian traffic,” explains NCDOT.

A 2012 crash data analysis indicated a 23 percent overall reduction in crashes after construction. Each subsection of the study area saw a reduction in crashes, except for the roundabout at Pullen Road and Hillsborough Street. NCDOT engineers responded to the problem by modifying the roundabout from a double-lane to a single-lane facility in July 2012, bringing crash rates back down at this location.

From $150 million to $200 million in new private investments have been made along the corridor since the reconstruction, according to reports by NCDOT and the Hillsborough Partnership. Prior to the project, the feasibility study reported that businesses were struggling and some failed partly due to “fast-moving traffic and non-supportive parking enforcement procedures.” But now “a hearty business environment is in place and growing,” notes a report by AARP.

A third phase of streetscape improvements is moving forward that will expand the project about nine-tenths of a mile westward.

The project has impacted politics in Raleigh, notes AARP. Mayor and many council members now support walkability and transit as a result of the changes to Hillsborough Street.  “These leaders consider themselves well versed in how transportation investments can be leveraged to build a sustainable future and a more enjoyable present for the community,” AARP notes.

In addition to the street improvements, the City Council established a business improvement district in 2008 to revitalize areas along Hillsborough Street. Public transit improvements were implemented. Like a number of context-sensitive design projects, Hillsborough Street galvanized support for related policy decisions that helped to boost economic and social conditions for the surrounding community.

Roundabouts are used to create attractive gateways and vistas, minimize speeds, reduce the problem of left turns (where most traffic accidents occur), simplify pedestrian crossings, and keep traffic flowing gently along the street, according to NCDOT.

Strong community and business support was critical to the overall success of the street reconstruction.

The community’s focus for Hillsborough Street was directed toward transforming the area into a “great street and public realm,” enhancing the street’s retail appeal and improving vehicular and pedestrian safety, NCDOT reports.