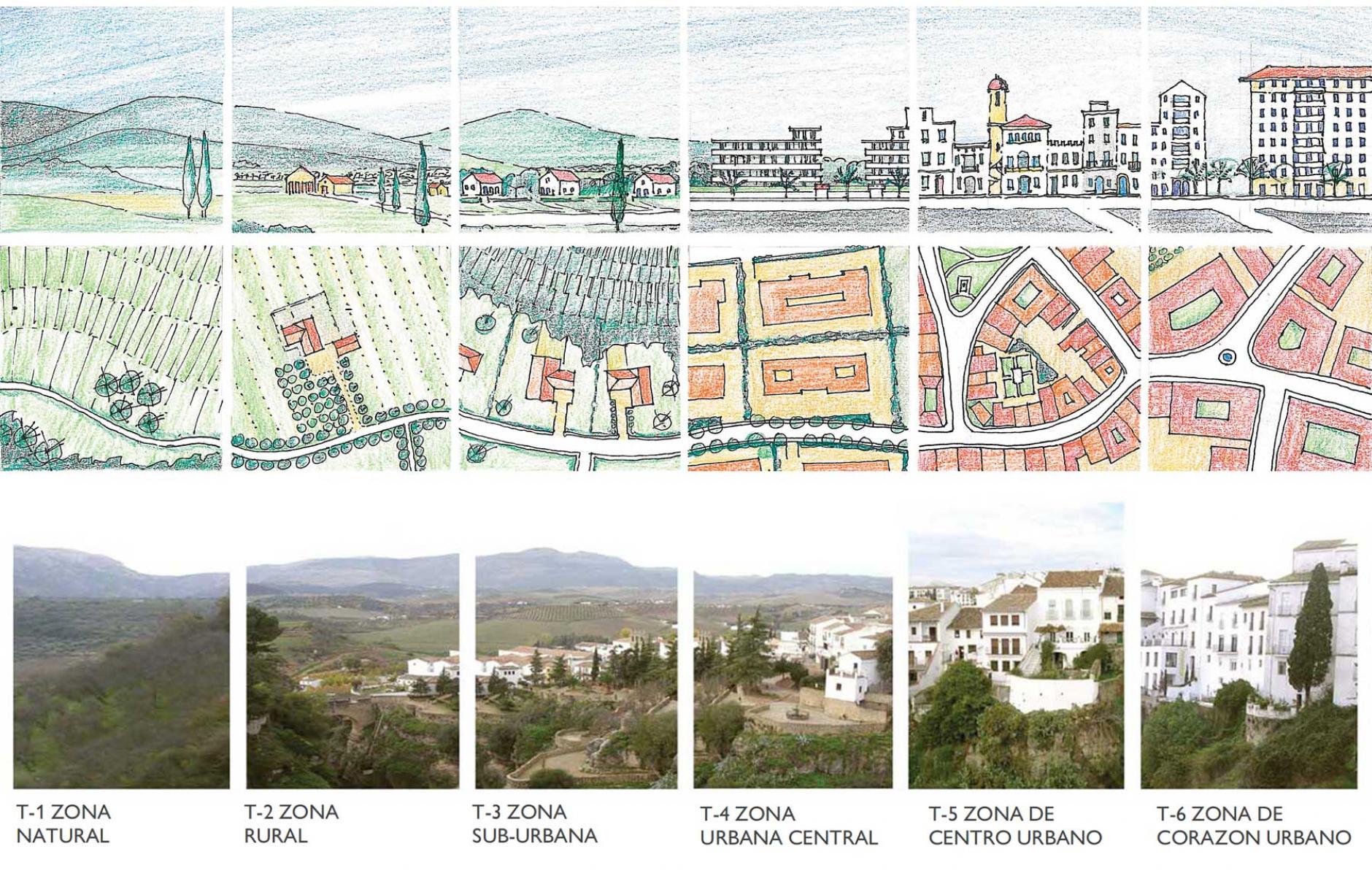 Transect illustrations of Nassau by Dhiru Thadani, and photographic Transect of Ronda, Spain, by DPZ.
Design

Your guide to a unifying urban theory

Urbanists have been using the Transect to compete with the protocols of sprawl for years, and no book has been written on it—until now.
ROBERT STEUTEVILLE   &nbspDEC. 10, 2020

Prior to this, no books have been devoted entirely to the Transect—although many have touched upon it (I included a section in New Urbanism: Best Practices Guide). Published by Oro Editions and the Center for Applied Transect Studies, Transect Urbanism comprises eight new essays, 100 pages of images—many fascinating and some amusing—by artists and designers, and six of the best previously published academic articles on the topic. An excellent two-part introduction by Duany—an architect and planner with DPZ CoDESIGN—is worth the price of the book.

“The Transect is a unifying theory, which serves as a framework for the various disparate fields affecting urban design,” Transect Urbanism explains. The Transect is an organizing principle for hundreds of new urban zoning codes, adopted in recent years, that are raising the level of urban design and the public realm in many cities.

Transect Urbanism tells the story of how this idea came together as a practical theory. Douglas Duany, brother to Andres, demonstrated the idea of ecological transects to Duany in 1980, as the pair walked a straight line up the beach and over dunes in Seaside, Florida. Later they crossed a section of Miami on foot, while Douglas explained how a city could be analyzed in a similar way. Andres realized the Transect could be used to design urban places. He employed it in planning starting in the late 1980s, and the idea grew into an organizing theory.

In the mid-1990s, a “eureka” moment came as Duany used the Transect to organize The Lexicon of the New Urbanism, a DPZ document defining the key elements of walkable urbanism. That exercise highlighted the Transect’s power for classification of the built environment. Duany first presented The Transect to CNU V Toronto in 1997, and it was fully incorporated into a code in 1999 in Onondaga County, New York. Other new urban firms immediately picked up on it.

Transect Urbanism gives credit to many people who have contributed to this theory, some of whom lived a long time ago, like biologist Patrick Geddes and planner Benton MacKaye—both drew versions of landscape transects. Art from many cultures depicts rural-to-urban transects, and the idea is imbedded in traditional cities. Not merely a design concept, The Transect is more like a tool that has always been there, used informally by humanity. Duany describes the Transect as “natural law,” and this book makes the case for that description. Duany writes:

It is time now with this book to explain the universality of this taxonomic engine; to showcase the many firms and colleagues who work with the Transect technology; and most important to show that there were predecessors and simultaneous discoveries— that it wasn’t the concoction of DPZ. And if no explicit precedent, it was innate in the work of Krier, Unwin, Schinkel, Vitruvius, and others, as shown by their illustrations. To this may be added the photographic evidence of the existence of the Transect in the structure of cities—even unplanned cities. It seems that the Transect is confirmed as an instance of immanence as a natural law.

The SmartCode incorporated this tool into modern zoning, and through similar form-based codes the Transect has become fundamental to urbanism practice. The Transect is a theory that can compete with sprawl, Duany explains.

Sprawl has persisted, despite its many failures, due to its bureaucratic advantages, he says. The underlying theory for sprawl was “promoted since the 1930s by Le Corbusier and his fellow polemicists of CIAM.” Since sprawl development became dominant, an alternative theory for urban form has been lacking, Duany says. Ian McHarg came up with an environmentally oriented planning hypothesis in his 1969 book Design With Nature. That book had a big influence, but McHarg offers no proposition for the human habitat, Duany says—in practice, Design With Nature creates a more environmentally conscious sprawl. “What remains to be done is to extend the environmental protocol of McHarg into the city. This can be accomplished by deploying the Rural-to-Urban Transect.” The Transect connects nature to the most intense human places along a continuous gradient—hence the subtitle, Readings in Human Ecology.

Duany believes that the Transect will overtake the theories that produce sprawl, because urbanism performs better.

The current dominant theory does not process authentic urbanism. An alternative, based on the Transect, would. The Transect should be neither imposed nor protected, but confirmed through empirical success. With time and the contributions of many representatives of the specialties, it could become as comprehensive as the current standard, as convenient to implement, and it would result in better places to live.

The Transect makes the case for applying different environmental standards relative to the intensity of urban places.

For every environmental condition (and every element of the built environment), there should be at least six standards generated. To take the preservation of wetlands as an example: For the set-back from a river running through T-1 (natural lands), a mile or two is a reasonable expectation. When the river comes into T-3 (sub-urban), however, it becomes a “riparian corridor” and the set-back requirement could be decreased to 50 feet of intact nature. As the river passes through a T-6 urban core, it makes no sense to keep to a standard that prevents humans the reward of access to the water as a feature that enhances the urbanism. At the most urban end of the Transect, an embankment—as in Paris, London, Chicago, Amsterdam, Rome, or Charleston—should be permitted.

Transect Urbanism explains many uses of the Transect. A diagram by architect Seth Harry correlates urban retail types to the Transect and community types. Harry writes:

The Rural-to-Urban Transect ... provides an effective tool for reintroducing traditional retail formats into a regional context. It does so by proportionally allocating land uses and transportation infrastructure in such a way that the retail uses can appropriately be distributed, in both scale and location, relative to the sources of demand for goods and services. This model is consistent with historical urban land use practices, generates a system that is optimized around locational efficiencies, and is, in effect, self-regulating.

Conventional suburbia can be slowly transformed, at least in part, through “sprawl repair.” Urban designer and author Galina Tachieva relates sprawl repair to other transformations of the built environment over time, from villages to city neighborhoods, and from walled European cities to the cities of today. Sequence images show how Transects can emerge and evolve over time. In that way, the theory can help to transform badly designed single-use sprawl into Transect zones with specific character.

An essay explaining the “Synoptic Survey” will prove useful to planners. This process is used to “calibrate” the Transect of particular communities for coding. Sandy Sorlien, an editor of the SmartCode, boils down the steps involved in observing and sampling the Transect locally. This highly technical chapter is short but pithy. Sorlien explains the dissect and the quadrat, techniques borrowed from ecological analysis. “These techniques have been adapted by Transect planners for the human habitat in urbanized areas. The urban Synoptic Survey has three purposes: analysis, coding, and evidence.”

The Transect of Speed Limits, another Sorlien essay, is a lighter read. It describes Sorlien’s observation of the Transect imbedded in historic towns across America as she took photographs for a book. She first learned of the theory in a presentation in 2000:

This Transect had an elegant new six-zone model, but it wasn’t a new phenomenon. I recognized it from my travels.

When I left my big city’s orbit, the Transect was more evident than it was in the metropolis, though it’s here too. Back in the 1980s and ‘90s, I’d approach small towns from the countryside, and began to notice a pattern. The speed limit signs would change predictably: first 55 mph, then 45, then as the houses appeared, 35, then as the houses got closer together and closer to the street, 25, and maybe even 20 on the main street. With a manual transmission, you couldn’t miss the downshifts. I’d explore the town on foot or bike, photograph buildings, eat in a downtown diner, then drive on out. Then the signs went up: 25, 35, then 45 where you could see open country ahead, then 55 and a rural highway again.

Twenty-plus years after the Transect was introduced, is there a planner or urban designer in America that isn’t at least somewhat familiar with the concept? If so, they are few and far between. And yet Transect Urbanism is essential for both novices and highly experienced planners to deepen their knowledge of this useful theory.

Note: I know, personally, most of the writers included in this book—all of whom contributed to Transect theory and its applications. Authors not mentioned in this review are Elizabeth Plater-Zyberk, Charles Bohl, Bruce Donnelly, Emily Talen, Daniel Slone, Sidney Brower, and Philip Bess. ​ 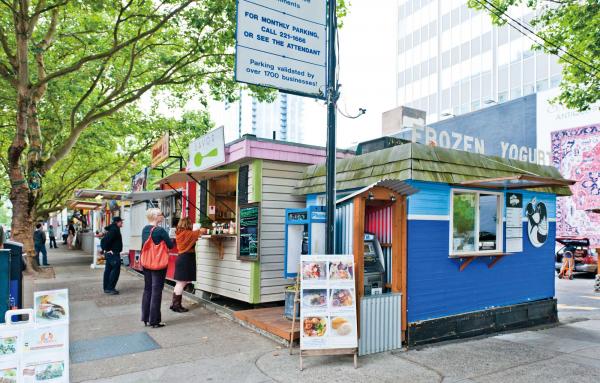 A comprehensive guide to buildings in walkable neighborhoods