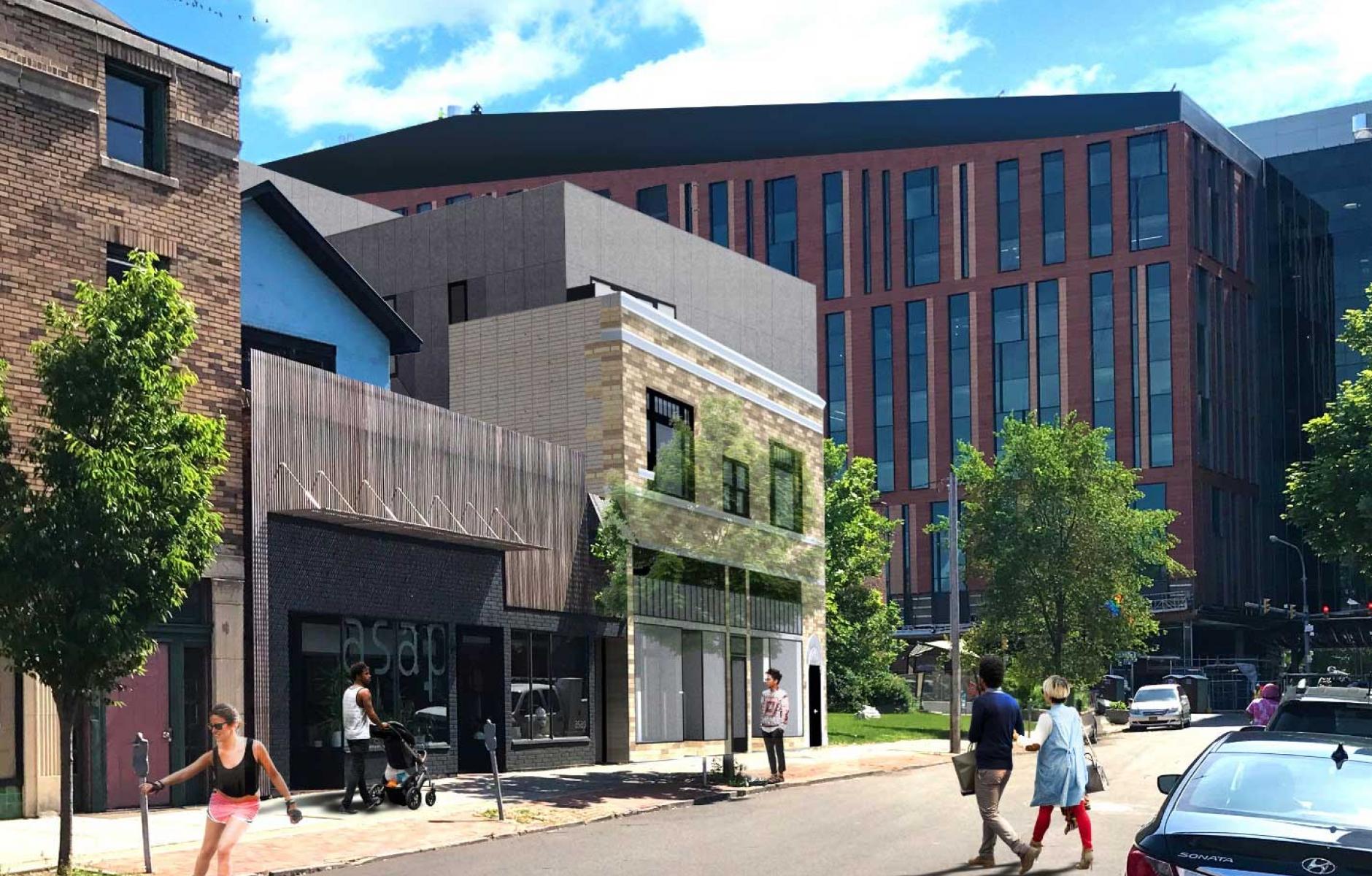 One of the few form-based codes to be applied citywide in a regional major city, Buffalo’s ordinance is having a positive impact on neighborhoods and downtown.
ROBERT STEUTEVILLE   &nbspNOV. 23, 2020

Buffalo’s Green Code, a form-based code (FBC) that eliminated off-street parking requirements, has now been operating for almost four years. While the Green Code has enabled some new mixed-use infill development, its biggest impact is in facilitating the rehabilitation of historic buildings in a slow-growth, pre-1950-era city.

The code has permitted the revival of legacy storefronts that were vacant or converted to residential. Development is taking place in old industrial buildings like Pierce-Arrow Motor Car and the city’s famous grain silos near the Lake Erie waterfront. Large vacant downtown buildings like the early 20th Century Statler hotel and the Art Deco former police headquarters are being rehabilitated. These developments would have been difficult or economically unfeasible under the old code.

Bernice Radle, of Buffalove Development and a Zoning Board of Appeals member, agrees but notes the code could be improved in some areas. Former commercial spaces can be converted to new shopfronts without a variance, yet developers cannot build these spaces new in largely residential neighborhoods, she says. A provision that would have allowed such buildings was taken out due to opposition. Since neighborhood shops are part of the city’s urban fabric, Radle believes that developers should be able to build them new without a variance. Developers are also seeking variances on maximum building width provisions in some neighborhoods. Even in projects that seek variances, the basic urban design—e.g. urban frontages, placement of parking—is much better than the typical project prior to the Green Code.

There are exceptions to this rule. The brutalist Seneca One building received a number of variances to the Green Code to move forward with rehabilitation. But in reoccupying the vacant 1.2 million square foot tower, new walls will block the building’s plaza from sidewalks. This building will add jobs and life to downtown, and yet the project's street-level urbanism runs counter to Green Code goals.

The impact of parking

Parking greatly damaged 20th Century Buffalo. The joke about parking was: “If the goal was to destroy downtown, we only halfway succeeded.” Over decades, about every other site downtown became parking. And parking requirements made the rehab or construction of new urban buildings throughout the city more difficult and expensive.

Radle recently converted a neighborhood commercial property that had been boarded up into space for a small pie and coffee shop. With the old parking requirements, “We would have had to buy the vacant lot next door to install a parking lot,” she says. “It would have doubled construction cost. Instead of $525 rent, we would have needed $800-900 month. That’s do or die for a small business.”

Elimination of parking requirements is allowing projects to be unshackled and “gentle density” to be added across the city, Radle says. In addition, a few large projects are going forward that would have been blocked by parking requirements, she says. One example is 201 Ellicott, which includes 200 units of affordable housing downtown and a grocery store. The living spaces are being built without parking. The code requires a transportation demand management (TDM) plan for a project this size. The project is next to a bus line and near the city’s light rail/subway. “There are countless examples of new construction and renovations that would have had to meet parking requirements and would not have gone forward,” she says.

Other new infill projects with good urbanism include 15 Allen Street in the Allentown historic district. Now under construction, 15 Allen Street was the first zero parking project approved as-of-right under the Green Code, Hawley says. This 12-unit contemporary mixed-use building is similar, typologically, to buildings of the early 20th Century.

The Larkinville loft district, about a mile southeast of downtown, was an impetus for writing the Green Code. Many of the large industrial buildings in Larkinville are now re-occupied and developers are constructing three new infill buildings on Seneca Street, the district’s main street. Mill Race Commons, a five-story mixed-use building with 70 apartments, is Larkin Development’s largest ground-up development so far, according to Buffalo Rising. This and other projects are filling gaps in the walkable main street.

Mixed-use instead of suburban

The old code favored suburban commercial types—typical fast-food restaurants or strip shopping centers were easier than traditional mixed-use urban buildings. Now that coin has flipped. The best example is a controversial Tim Hortons-anchored building at the northwest corner of Michigan Avenue and William Street, on the east side of downtown, approved by the Planning Board in March of 2020.

Ellicott Development proposes retail space on the building’s ground floor and three apartments on the second level, according to Buffalo Rising. This mixed-use building almost certainly would’ve been designed as a single use, set back drive-through establishment, under the old code. Tim Horton’s is getting a drive-through, but in the back of the building. A typical Taco Bell was denied approval elsewhere, Radle notes.

The code’s “neighborhood shops provision” allows for legacy shopfronts in residential neighborhoods to be brought back to life with only a special use permit—which is a huge win, says Radle. These shopfronts “would’ve been nearly impossible to reopen under the old zoning ordinance,” Hawley adds, and this change “has been an economic generator in distressed neighborhoods—especially benefiting new immigrant populations.” Bangladeshis, moving from New York City, are reoccupying the Broadway Fillmore neighborhood on the east side, an area that lost as much as 80 percent of its population. This area was originally planned as a second downtown.

The city is getting these special-use permit applications regularly. Examples include the Sycamore Halal, a food store that offers items permissible under Muslim rules in a two-story shopfront in Broadway Fillmore, and Larry’s Sports Lounge in the city’s Black Rock neighborhood. The urbanism is not beautiful, but it is real. The city hoped for this outcome, and yet the results have been greater than anticipated. Neighborhoods like Broadway Fillmore had seen little new economic activity in decades.

The Green Code cleared the path for saving perhaps hundreds of buildings citywide since the code was adopted. Only four percent of the city’s buildings are historically designated, and yet nearly the entire city is built prior to 1950. The code applies to the entire city.

The code addresses more than private buildings, says Radle. Streetscape provisions require developers to improve the public realm in front of projects, and the city has guidelines for public works improvements. Absent the code, streetscape improvements are sometimes neglected, she says.

The development community has been able to work with the Green Code, Radle says. Some developers who were doing more conventional construction are now building cool infill projects with accessory dwelling units, she adds.

There has been a slowdown in activity due to Covid, and precisely how much development in the last four years can be attributable to the Green Code is difficult to measure. One thing is for sure: Development quality has improved in Buffalo due to the Green Code.