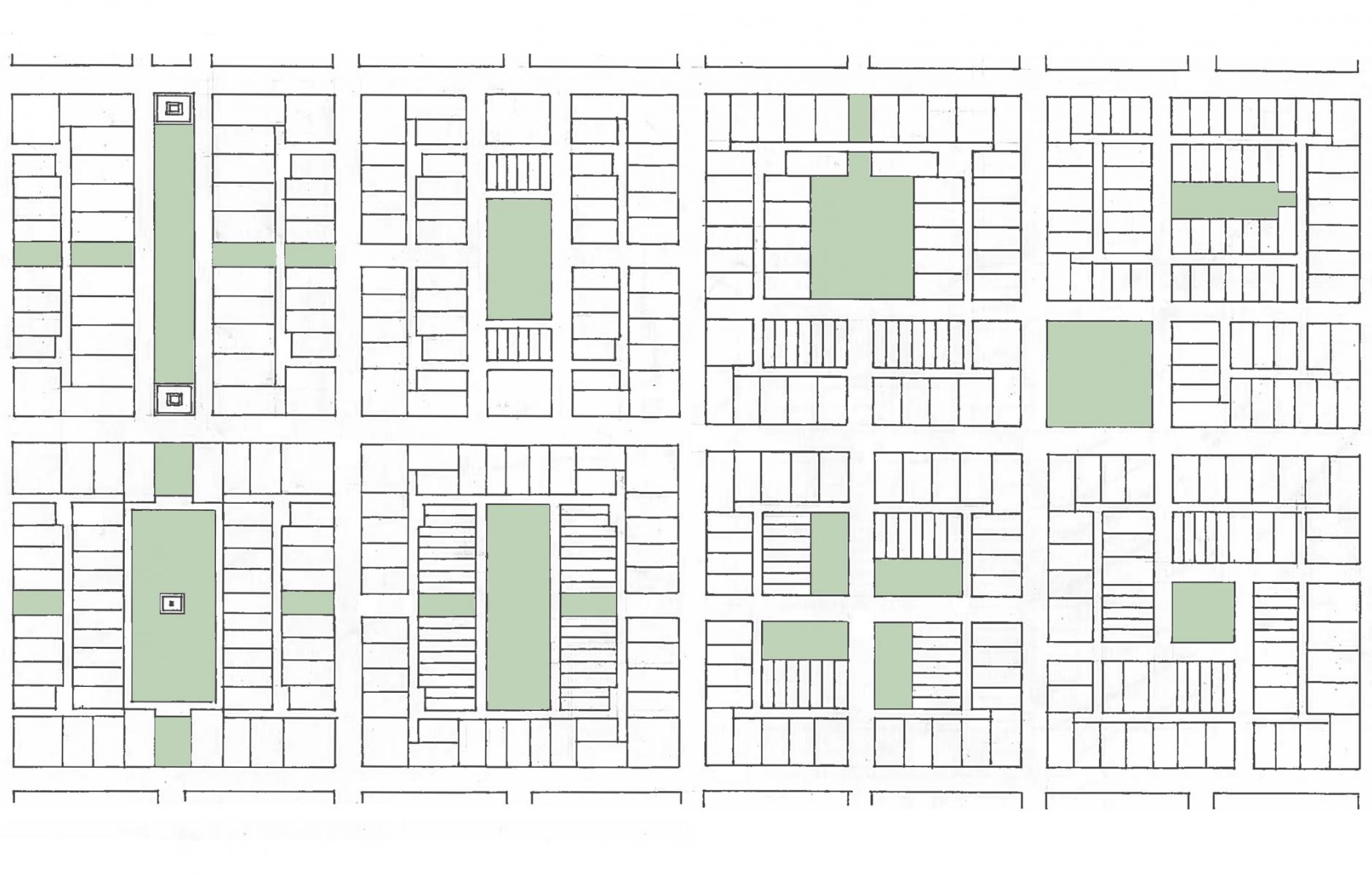 Multiple variations on the Bastrop Block that combine to create a grid of streets. Source: Simplecity Design
Streets

Why choose a grid?

The decision of a city in Texas to plan for new growth using a grid of streets has inspired readers and makes a lot of sense.
ROBERT STEUTEVILLE   &nbspNOV. 20, 2019

The recent article on Bastrop, Texas, struck a chord with a lot of readers. The city of about 9,000 people southeast of Austin has adopted a street grid for growth—one of the few cities that have taken that step since 1950. Bastrop is applying the grid in unique and flexible ways. The goal is to achieve fiscal and environmental sustainability.

Many readers made comments like urban designer Kevin Klinkenberg on Twitter: “This is the sort of growth management and design approach I’ve been wanting to see for over two decades. Way to go, Bastrop.”

And, “Fascinating and a bold move by Bastrop. A ‘must-read’ for anyone interested in city development and public finance,” notes UC Ukaoma, a real estate manager, on Facebook.

“What an inspiring return to the wisdom of how we once planned walkable towns,” writes engineer Bert Kuyrkendall on LinkedIn. “And within the code are variations of block type and building type patterns that enable variation and flexibility for developers.”

Why should any city require a grid?

Before answering that question, I'll add two key points. First, Bastrop is applying a grid where it makes sense—not where it is geographically impractical or environmental harmful. Second, Bastrop allows many fine-grained block variations within the overall grid—so developer and landowners will have a lot of flexibility to carry out plans.

Having said that, a grid offers advantages over the dendritic street patterns that have dominated new development across the US for the last seven decades.

First, a grid results in development with a high value per acre, which is closely associated with wealth creation and fiscally sustainable land patterns, according to Joe Minicozzi of Urban3, a firm that pioneered the concept of “geoaccounting.” Bastrop conducted fiscal analysis of every parcel in the city to determine whether it was “revenue positive.” The best performing area of the city is downtown—the only place with a historic street grid.

Grids also disperse traffic—rather than concentrate it. They allow for a tremendous variety of route options, which means that individual streets can be much smaller and therefore walkable. Dendritic systems concentrate both traffic and destinations like shops and schools on large arterial roads, which must carry all of the through traffic and their size makes a car necessary for most, if not all, trips.

Because the streets are smaller and and can serve a variety of functions, they eliminate the problem of stroads. A term coined by Strong Towns founder Charles Marohn, a “stroad” is a thoroughfare that mixes the qualities of streets and roads and serves neither purpose well. Because development is far apart, the arterials must carry fast-moving traffic—like a road. The stroads also provide access—like a street—to the destinations that seek to capture the traffic. That’s a Frankenstein mashup that doesn’t work very well.

Stroads create the problem of “big asphalt,” the concept that bigger is better when it comes to streets, intersections, and parking lots. Grids allow for less asphalt, because streets can be smaller and more people walk and ride bikes—which means that less parking is needed. A major reason for Bastrop choosing the grid was to reduce stormwater runoff that contributes to flooding. Every gridded block will have built-in stormwater capacity—ensuring that new development does not add to the stormwater problem.

The mid-century planners didn’t test the dendritic street network gradually. The decision to abandon the grid in communities nationwide, virtually simultaneously, recalls another Marohn phrase: “the Great Suburban Experiment.” The scale of this change boggles the mind and could only have been achieved by a nation that recently had won a World War. The US took that organizational skill and used new theories to build suburbia. One of the theories was that if you reduced intersections, accidents and injuries from motor vehicles would go down. That theory was based on the observation that most car accidents occurred at intersections. Reduce intersections and save lives, right? Better check that theory, because the dendritic thoroughfare system spread development out into low-density enclaves. People could no longer walk and they had to go further distances at higher speeds. This ultimately resulted in a tripling of fatalities. This outcome calls to mind the adage, “the road to hell is paved with good intentions.”

Given the reaction to the Bastrop article, perhaps a growing number of practitioners and leaders are willing to rethink the transportation policies of the last 70 years that have focused on dendritic street patterns. And, what we built since 1950 will be in place for a long, long time, impacting the transportation behavior and fiscal performances of cities for decades, maybe centuries, to come. It’s about time that we seriously began to reverse that pattern.