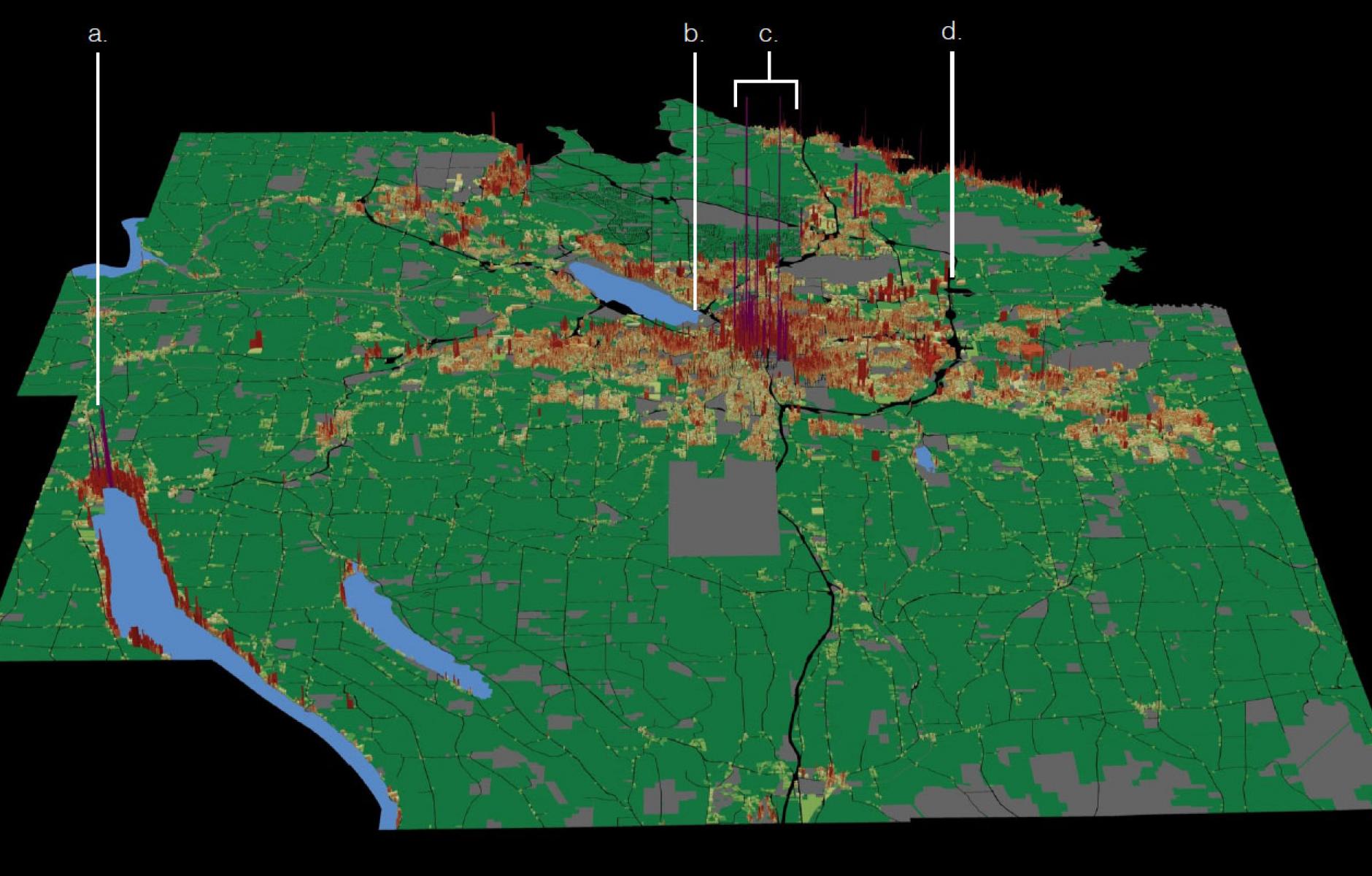 Source: Urban3, see text below for detailed explanation.
Got A Minute

The importance of downtown and walkable urbanism is paramount to Syracuse, New York, and other cities, made visible through this graphic.
ROBERT STEUTEVILLE   &nbspMAY. 24, 2019

Note: Urban3 won a 2019 CNU Merit Award with an Emerging Project designation for its “geoaccounting” method of analyzing urban places. All of  2019 Charter Awards will be presented at CNU 27 in Louisville on June 14.

I came across this remarkable image created by Joe Minicozzi and Urban3, a firm that creates 3D images of economic value and impact of land uses in cities and regions that drive home, at a glance, the importance of urban places. The image of real estate values in Onondaga County not only demonstrates the strength of downtown Syracuse and a walkable village center in the region, but also shows why transforming the current route of Interstate 81 is an economic imperative. I-81 now goes through the heart of the city, but an alternative corridor, which already has an Interstate highway, makes more sense (NYS-DOT agrees, but many questions remain). In the words of Urban3:

"Onondaga County, NY, and all of Central New York, has long suffered economic declines and issues typical of “rust belt” communities. Yet even with economic decline, you can still see the relative potency within the model at downtown Syracuse (c) and the Finger Lake village of Skaneateles (a). But the model also aided other conversations. A major problem in Syracuse is that they plowed I-81 straight through the heart of downtown in the 1950s. The impact is visible in the model (c) in the gap between the two tallest purple spikes. The width between the spikes is the economic impact of the highway. The community has long had a sense that it had carved a scar in the downtown, and in order to mend it, they need to change its design. A byproduct of the model is that an alternative was immediately visible at the periphery (d), in that an over-built corridor exists and could be renamed as I-81 and meet the needs of the FHWA, and allow downtown to mend its core. Finally, there are notable value differences in the lakes, in that Skaneateles Lake (a) holds better “value” than Onondaga Lake (b). This is due in large part to community design, but also the legacy of ‘industrializing’ Onondaga Lake, with the resulting effects of pollution externalities."