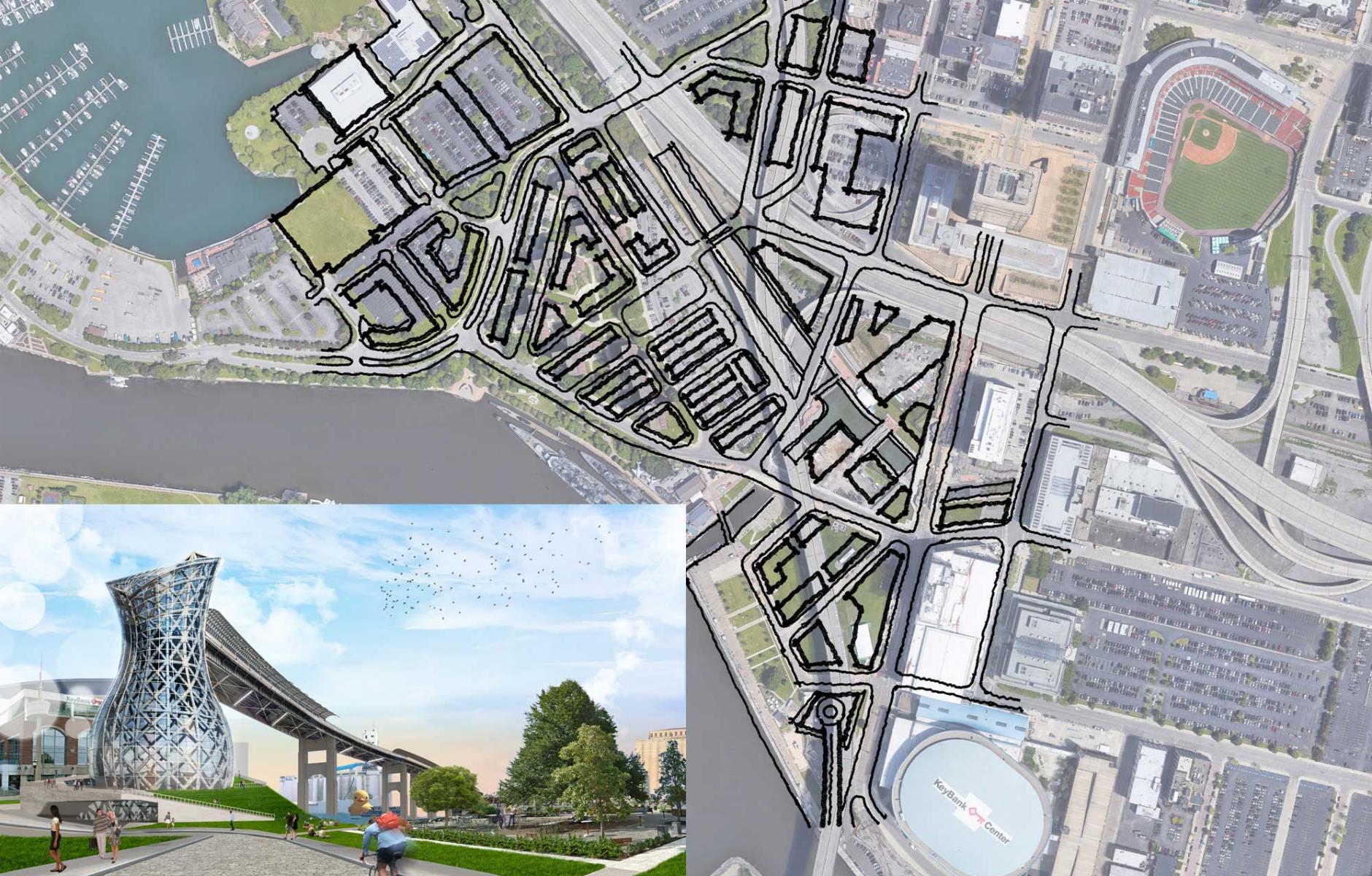 The City of Lights proposal shows how demolishing most of the Skyway would enable restoration of the downtown street network, while part of the bridge could be retained as an elevated park (inset).
Freeway transformation

A new view for Buffalo

With the governor’s endorsement, CNU’s long-time recommendation to transform Buffalo’s Skyway is closer to reality. The city and state have an opportunity to implement the best ideas from the top proposals.
LYNN RICHARDS   &nbspSEP. 19, 2019

The Buffalo Skyway may live up to its name at last.

Standing on the stage at One West this week, overlooking the old elevated highway, Governor Andrew Cuomo announced to an enthusiastic gathering that it was time for the Skyway to come down. He posed two questions: Should we do it? Can we do it?

To the first question, he responded: Absolutely, with a reference to CNU’s decade-old call to remove the Skyway, documented in numerous Freeways Without Futures reports since 2008. Governor Cuomo’s answer to the second question is a commitment of $10M for the environmental impact statement.

It was a dramatic ending to the ‘Aim for the Sky’ design competition, which opened in May to reimagine the Skyway corridor from a mere highway to a civic asset. Three finalists were selected: the City of Lights, the Skyway River Loop, and Queen City Harbor. All three emphasize different possibilities for the Outer Harbor. Taken together, they represent an opportunity to reconnect Buffalo to its waterfront and build on the city’s successful efforts to revitalize the Canalside district. The Congress for the New Urbanism recommends that the best elements of each proposal be incorporated into the final vision for the Skyway corridor.

Serving on the jury for the Skyway’s next vision--alongside thoughtful and accomplished colleagues from the public and private sectors--has reinforced for me how interdisciplinary the best urbanism has to be: it must blend transportation, public space, historic preservation, and redevelopment objectives to create a great city’s waterfront. And most importantly, these integrative designs must be human scaled, responding to local context and the experience of residents. That is urbanism’s sweet spot: places where people and businesses can thrive and prosper, that are sustainable and healthy, and are enduring.

Buffalo’s Skyway soars more than a hundred feet above the harbor to enable container ships and sail boats to pass underneath. It was built to help facilitate the movement of goods and workers to and from the industries that once lined Buffalo’s waterfront. Because of its height and Buffalo’s winters, the Skyway receives additional salt and treatment during storm events, increasing the rate of decay for the road. Additionally, traffic has declined to approximately 40,000 ADT, well below that of major highways and more in line with the capacity of an urban boulevard. Given this context, the Skyway’s inhibition of downtown development, and the overall resurgence of downtown Buffalo, the calls to remove the Skyway have gained momentum over the last decade. Governor Cuomo called for a design competition to help increase and catalyze the Buffalo’s downtown development.

Of the over 100 applications received, 16 were invited to submit full proposals, and nine finalists were selected to present to the jury. Many of the final proposals had compelling design elements. I kept wishing we could take pieces from the strongest ones to stitch together a comprehensive design for the downtown area, Outer Harbor, and the canals. This is why CNU’s recommendation to the city is to leverage the best aspects from all three winners.

The City of Lights: Re-Viewing Our Waterfront proposal (see image at top of article), submitted by SWBR from Rochester, NY, detaches the Skyway’s bridge from Route 5 and converts it into an elevated park, which offers a magnificent view of the city and lake and follows a trend of elevated linear parks nationwide, such as Manhattan’s High Line and the upcoming 11th Street Bridge in Washington, DC. Additionally, the proposal strengthens pedestrian and cyclist connections between downtown and the Outer Harbor with rebuilt bridge via Michigan Ave and a new road to Buffalo’s Silo City, where about 400 CNU 22. Buffalo participants gathered for a memorable evening. The remainder of Route 5 downtown and along the Outer Harbor is deconstructed, opening up more than 60 acres for a combination of compact, mixed-use development and open space.

Queen City Harbor, proposed by Christian Calleri, Jeannine Muller, Min Soo Kang, and Andrea De Carlo of Washington, D.C., proposes to replace the Skyway and Route 5 along the Outer Harbor with a retrofitted Furman Boulevard and Ohio street to accommodate multi-modal access including BRT. Connections to downtown would be provided by new lift bridge connections at Main St and by a pedestrian-friendly bascule bridge across the Buffalo River, which re-establishes the connection between downtown and the Outer Harbor at Michigan Avenue. Removing the Skyway opens more than 80 acres of Canalside and the Outer Harbor from the Skyway’s former right-of-way to build new neighborhoods—with the potential to catalyze another 51 acres of infill development downtown.

Of the finalists, only the Skyway River Loop proposal, submitted by Marvel Architects from New York City, maintains the Skyway as a limited-access road. It does, however, remove the interchanges with I-190 to open up some land for new mixed-use infill development. The proposal maintains Kelly Island as industrial space, envisioning comparatively little land for mixed-use city blocks, and the Skyway remains a significant barrier to the waterfront.

Synthesizing the best of all solutions

All the proposals sought to promote and enhance connectivity to Outer Harbor, one of Buffalo’s signature public spaces. This is a great benefit for the people of Buffalo, who currently have no direct biking or walking access to the Outer Harbor from downtown. All three plans restore this connection through the rebuilding of a Michigan Avenue bridge, which re-establishes the connective fabric of the city.

In the Queen City Harbor plan, the bascule bridge linking Canalside and the Outer Harbor combines rights of way for vehicle traffic, protected cyclist lanes, and ample sidewalks. The linear Skyway park of the City of Lights proposal removes auto traffic from the equation altogether, to further ensure easy pedestrian access to the Outer Harbor. Connections like those help realize the Outer Harbor’s potential as Buffalo’s premier park, where all Buffalonians can enjoy the city’s waterfront.

Despite many commonalities, the proposals also differ in significant ways, which is an opportunity to weave the best elements of each together. Linear parks that repurpose infrastructure have proven to be popular amenities, and increase the area's desirability. A Skyway park could have a similar effect on Buffalo, but the bridge’s 110-foot height presents accessibility challenges. Any structure that provides elevator access to the park needs to fit seamlessly within its urban context, as well as be permeable and welcoming to draw people to the waterfront. The Outer Harbor is an industrial area poised to transform into a mixed-use waterfront district and public space. A new sky bridge should fit that character, drawing from the city’s industrial past and pointing towards a 21st Century future. The bridge design proposed by the City of Lights needs more careful consideration and reworking if it is part of the final plans.

It’s easy to focus on the bridge, which is naturally the focal point of all proposals. Yet of all the benefits of taking down the Skyway, restoring the street grid offers the most potential for creating new, walkable, mixed-use neighborhoods that will enable Buffalo’s resurgent downtown to grow. The top-ranked proposal has strong ideas on this critical issue. At the same time, the Queen City Harbor proposal offers the most promise for restoring the grid. A robust street grid can also support alternative forms of transportation to serve the Southtowns commuters who formerly drove the Skyway. Bus rapid transit routes, such as the one proposed along Ohio Street in the Queen City Harbor plan, offer one such solution.

It’s essential to consider the outcomes desired when redesigning the streets of the Skyway corridor. If the goal is to create a vibrant and economically resilient Buffalo waterfront, then the presence of a limited-access road along the Outer Harbor and into downtown, proposed in the River City Loop plan, will remain problematic and detrimental to both urban development and the enjoyment of green spaces around it. Walkable, mixed-use urbanism may be in demand, but its successful development requires the creation of an urban environment that prioritizes pedestrians over vehicles. Limited-access streets, especially those in a dense urban setting, achieve the opposite effect.

It will be exciting to hear the response of Buffalonians themselves to the proposals, and to engage them fully in a robust public process that brings together a public vision for the city’s future with these proposals for the waterfront. In the work of building places people love, it’s vital to know what it is that people love most in their communities--and to respond to their experience of their cities.

The State of New York took a bold step forward this week in committing to transform the auto-oriented infrastructure investments made during the 20th century. It now has at its disposal a repertoire of tools and design ideas to transform these aging investments into a vibrant, world-class waterfront. If the city and state play the right Skyway cards, this automobile-centric holdover from the 20th Century could become a powerful people-centered economic development catalyst for the comeback city of Western New York.

Lynn Richards is President and CEO of the Congress for the New Urbanism.