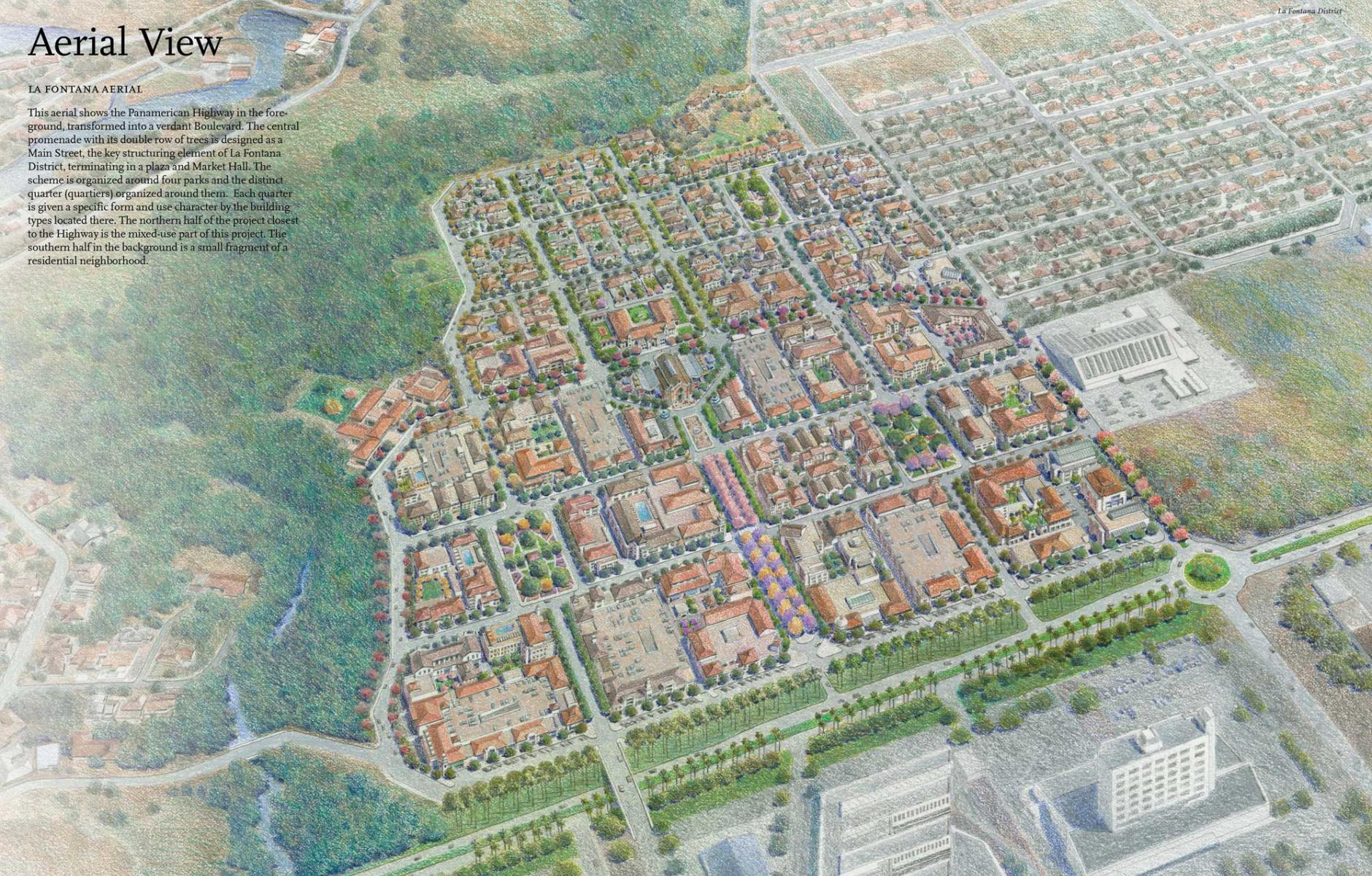 The La Fontana District, designed by Moule & Polyzoides, contrasts with sprawl and uncontrolled infill that has damaged the historic city of David, Panama. The plan won a merit award in the Emerging Projects category of the 2020 CNU Charter Awards.
ROBERT STEUTEVILLE   &nbspMAY. 7, 2020

La Fontana District is a 96-acre new district located to the west of the historic city of David, Panama, on a site facing the Pan-American Highway, which stretches from Alaska to Argentina. Over the decades, uncontrolled infill development and random sprawl have eroded the urban form and ecology of David, which was originally planned according to the Law of the Indies.

La Fontana sets a new model for development based on the principles of New Urbanism—a design and policy approach that has been lacking in Panama. The development is designed using a compact grid of blocks and streets carefully inserted into a landscape of existing clearings, with native landscape species specific to the tropical climate of the country.

“This approach contrasts enormously with typical practices in Panama, where the landscape is considered merely for its ornamental value, if considered at all,” notes Luis Alfaro, a Panamanian landscape architect who was involved in the project.

La Fontana is a traditional neighborhood development (TND), an idea that has built some transformative projects in the US and other countries. This project is designed to the highest standards of TND, notes architect and juror Marieanne Khoury-Vogt. “This beautiful project manages to seamlessly stitch the grid together on one side, and open up to ecological considerations on the other. It has a scale of blocks and streets that I love.”

The district integrates multiple housing types that emphasize courtyard living. With neighborhoods organized around squares, the plan takes its inspiration from the historic center of Savannah, Georgia. La Fontana is composed of four community sub-areas: three centered on Savannah-like squares, and the fourth on a park opening to a river. The Savannah-like parks are surrounded by blocks making up “quarters.” The northwest park area is called the “knowledge quarter,” and the development calls for a large university building, student housing, and a civic building belonging to the Republic of Panama central govern­ment.

A three-block-long main street connects to the highway, terminating on the other end at a plaza and market hall (Mercado). The Pan-American Highway is the principal mobility corridor through Central America. To help drivers, bicyclists, and pedestrians alike travel safely along the corridor, the plan proposes to transform the Pan-American Highway through La Fontana into a multiway boulevard.

The project’s eventual buildout is planned for nearly 4 million square feet of new development. The northern half of the project will be a mixed-use district with commercial, institutional, and residential uses that accommodate distinct programs. The southern half will be a residential neighborhood with the river along its eastern and southern edge.

An east-west parkway divides the northern mixed-use portion of the development from the southern residential area. The parkway creates an important gateway into the development from the west and it is centered on two important facilities, the Mercado and the Neighborhood Center, which are the iconic buildings and social attractions at the heart of La Fontana District.

The developers spent many years considering how to design and build on this critical site, eventually making the determination to use a walkable urban model. “During the pre-charrette period, we decided to use the Savanah model as the basis for our project,” note the owners, Sergio and Monica Anguizola. “It was the right way to go. We ended up with a project that was a dream come true. A project offering direction towards a beautiful and delightful place to live, work, shop, walk, a place to be, a true destination.”

Note: The 2020 CNU Charter Awards will be officially presented on Saturday, June 13, at CNU 28.A Virtual Gathering, including a 20-year retrospective by Elizabeth Plater-Zyberk. 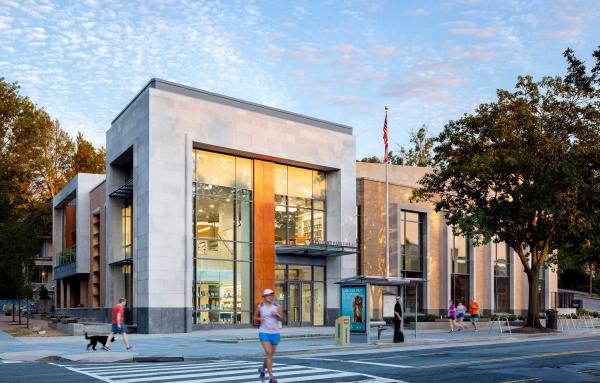