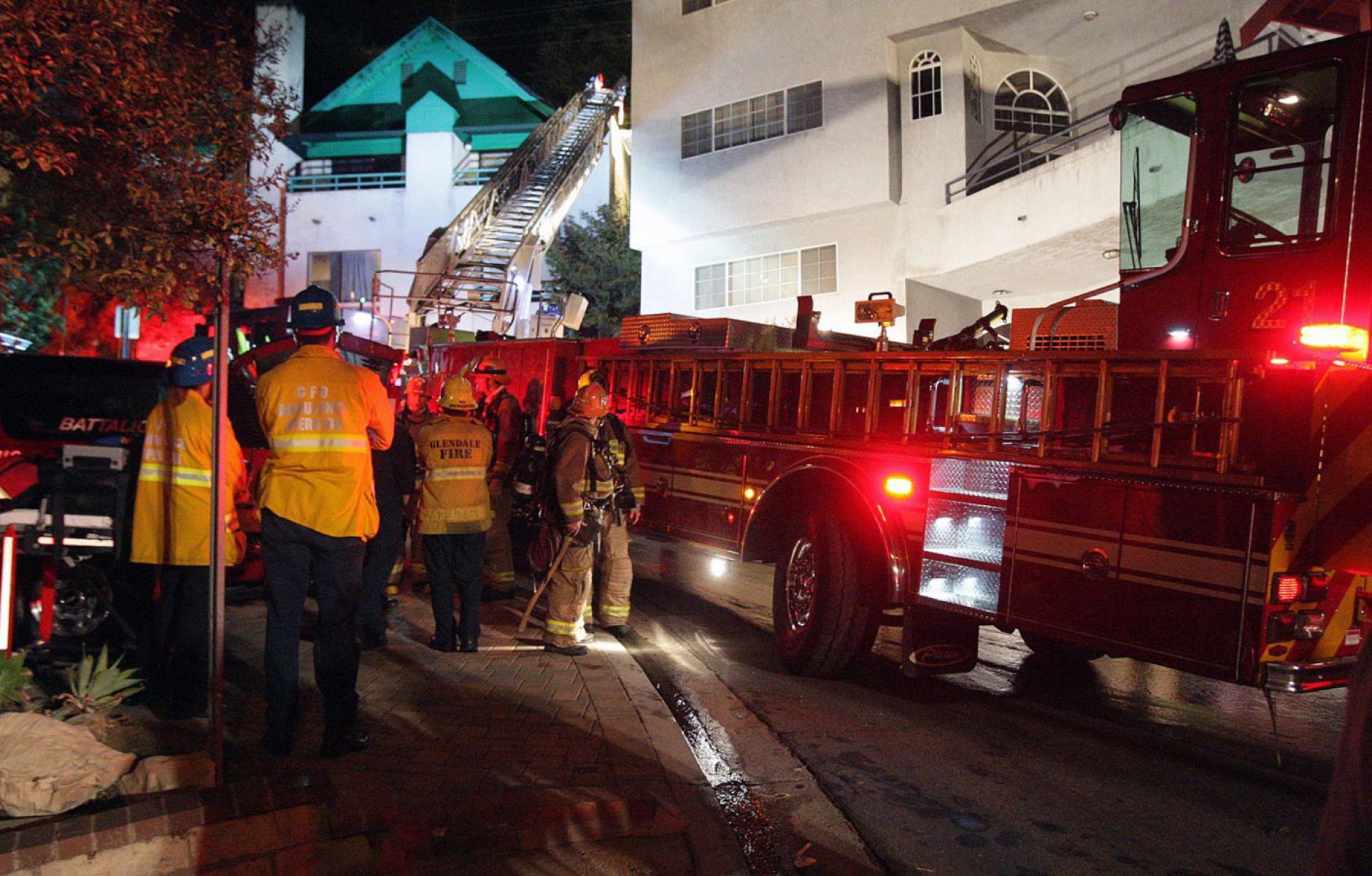 On a warm day in 1971, I was on my way to the local bodega near my home on 79th Street in New York City when I saw a ladder truck stopped next to the store. A few of the fire fighters were hanging around with sour looks on their faces. The radio was squawking away and they were listening intently. I asked what was up only to be told that a crew was being fired on during a 3-alarm in the northern part of Manhattan. I said “You mean they were at a fire, right?” They said no, they were being shot at. New York was a complete mess at that time. The streets were full of garbage; the city was low on funds. Homeless people were everywhere and crime was rampant. There was another problem in this politically charged time, the police and fire services were under attack by angry citizens. I asked if this was unusual, but apparently it wasn’t. I asked how they dealt with it and the big guy at the wheel said, “We just do our job.”

This was my initial education into the world of emergency responders. I got to become friends with a couple of those guys and heard stories of horrific situations about double-parked trucks on narrow crosstown streets, multi-story buildings with inadequate fire suppression, faulty equipment, low wages and so on. I wondered who the hell would want a job like that. It turns out that there were generations of firefighting families that considered it their duty and a tradition to care for the safety and welfare of the community that they grew up in and they gladly advanced that institutional heritage despite the horrendous obstacles they faced almost every day. This group of remarkable individuals was not unique to New York. It was imbedded in the service.

A couple of decades later I was practicing as a civil engineer moving away from subdivision design and beginning a career in sustainable land development: mixed use, diverse and walkable neighborhoods. What I was soon to discover was that the design of the public realm for safe and comfortable pedestrian use was essential.

Actually, no sustainable community could thrive without careful consideration of the public realm. This included parks, plazas, squares and our most used public space: streets. For a community to function properly, traffic must be calmed and encouraged to allow for a safe and comfortable public space occupied by large populations of pedestrians, bikers, the old and young and those with disabilities. To effectively do this, we needed to alter urban codes so that we could reform our laws to allow for appropriate financing, zoning, public works and building regulations. This was a huge task and one tackled by the New Urbanists initially. As an engineer, I was at the forefront of this effort along with a few others. Things were progressing on several fronts, but one has remained as a significant obstacle: the design of narrower or “right sized” streets. The biggest difficulty was getting the fire service to help us with the problems of overall public safety issues. That is to say, we must have streets that reduce nonmotorist injury accident frequency and severity. The literature in the last 25 years has proven time and again that narrower streets were rather effective in slowing vehicles, reducing pedestrian injuries, maintaining traffic volume capacities and increasing economic health.

With a few exceptions, the fire service fights this approach consistently despite evidence that we have developed techniques that should mitigate impacts on their fire suppression activities, incident access and rescue operations. For example, we must have a connected network of streets for multiple access strategies, reasonably sized blocks for one or two hose lengths, buildings close enough to the street for rescue operations and aerial suppression. We are well aware of the fire codes and their specification for 20-foot clear street widths. Currently, however, the codes are changing so that residential streets must have 26-foot clear. The 20-foot clear width can largely be accommodated in about 80 percent of our street types; two 10-foot lanes with parallel parking is not unusual. This is not achievable with the 26-foot clear requirement because it encourages speeding with its attendant injuries and fatalities in a pedestrian-friendly environment. Further, we need to control vehicle speeds within residential areas where traffic volumes are low and speeds are high. Why would one allow your kids to walk to school on dangerous streets? Why would anyone walk to a sidewalk café in your town center with noisy, unsafe traffic 20 feet away?

An effort for fire code reform was initiated in 2009 through the Congress for the New Urbanism (CNU). We invited fire officials from around the country to discuss these issues. The conclusion was something we all came to terms with after listening to one another. All but one fire chief were in complete agreement that we actually could propose an alternative code that could be adopted by fire departments for sustainable communities.

The dissenting chief liked our proposal, but didn’t think he could convince his administrators to support this alternative. In any event, members submitted some code changes to the National Fire Protection Association that allowed fire chiefs to make changes in the conventional requirements along with other necessary provisions (networked streets, block sizes, mid-block chokers, building setbacks, etc.). This proposal didn’t even get out of the committee. Perhaps we should have introduced this idea adroitly and slowly, but that is hindsight. We were still having difficulty on virtually every project. Then the CNU decided to give this one more try in its “Emergency Response and Street Design” initiative. The International Fire Code (IFC) people were asked to consider language changes that, frankly, were rather soft.

The proposed language at that time was as follows: 503.2.2 Authority. The fire code official shall have the authority to require or permit modifications to the required access widths where they are for fire or rescue operations or where necessary to meet the public safety objectives of the jurisdiction.

The phrase “public safety objectives” was introduced so that consideration could be made for all public safety issues including vehicular pedestrian safety. It was roundly rejected because it was too much of a change. Instead, the IFC code people added something rather nefarious. The most recent revision states: 503.4.1 Traffic calming devices. Traffic calming devices shall be prohibited unless approved by the fire code official.

Their position on this critically important issue was finally made abundantly clear as a blatantly dismissive attitude to overall public safety. I expect that the guys I knew in the ’70s would be appalled at this self-serving cop out. The arrogance and protectionist culture of modern fire service administrators should be an embarrassment to those who actually fight fires and perform rescue operations. I know from experience that there are those who put their necks on the line every day and would have no problem working with us for a sustainable future.

For example, I met with fire people at a city in Texas, a couple of years ago with the usual proposal for narrower residential streets in a local project. I was starting to present a 28-foot wide residential street section with parallel parking (a yield street) when one of them interrupted. “Wait a second,” he said. He reached into his brief case and pulled out a piece of paper. Rats, I thought, he’ll hit me with the usual code. But no, he handed me an approved residential section 26 feet wide with parking allowed. I almost fell over my chair as the fire guys laughed at my surprise. “We don’t have a problem with this,” he said. He knew that alleys were included, parking densities were very low, buildings were 1.5 stories at most and a network was to be provided, so what’s the problem? This has happened in my career on occasion. There are fire departments that can actually work with this situation effectively because they understand the ramifications. These are the ones with the ’70s heart. These are the heroes we speak of. 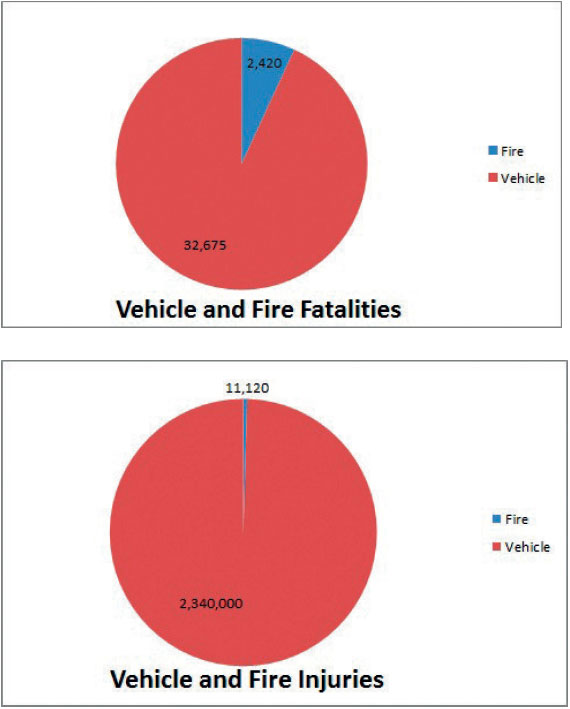 So, what are the statistics related to injuries and fatalities? First of all, we know that structure fire incidents for fire departments have fallen from about 25 percent to 4 percent. Much of their work these days involves Emergency Medical Technician responses like car accidents. Sprinkler systems are everywhere and reduce structure fires significantly. How about injuries and fatalities in the fire service with respect to vehicular incidents? (See the chart above.)

There are 15.5 more vehicle fatalities and 210.4 more vehicle injuries than fire injuries. This is extraordinary. Actually, this is 2014 data because such data was commonly available then, however traffic fatalities have reached 40,100 in 2017. In any event, one would think that the fire service might want to be part of a larger solution and encourage sustainable development for many good reasons.

Many cities in the United States include older parts that have narrow streets. These often have yielded residential streets of about 26 foot curb-face width. Can fire departments function in these places? Certainly, and fire officials almost always say so. They just don’t want to.

This article previously appeared in My Livable City magazine. 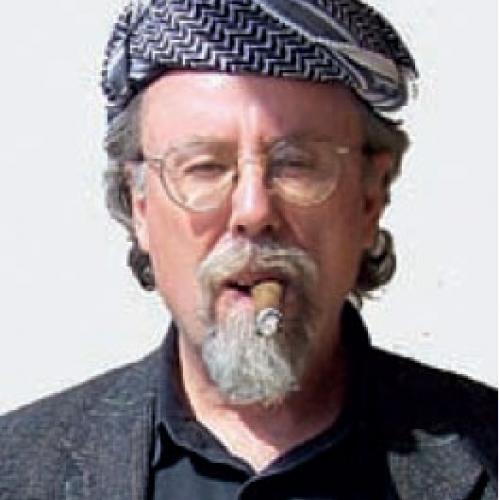 Peter Swift, PE, is a civil and traffic engineer and an urban designer living in Gold Hill, Colorado.