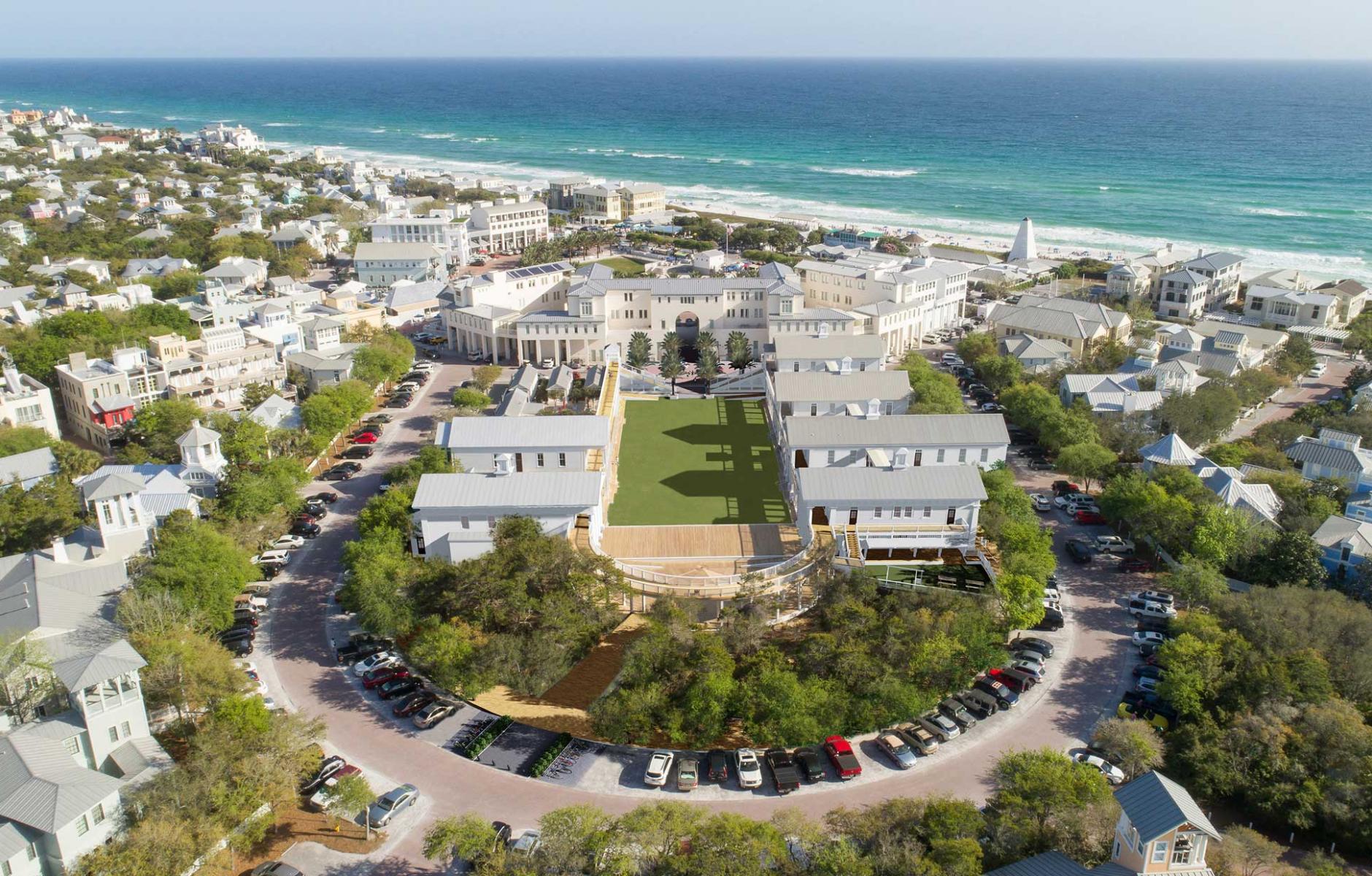 An aerial view of the Lyceum and surrounding Seaside.
Design

Seaside’s influence on urban redevelopment is profound—it initiated a re-evaluation of the the civic realm in planning and city building. Lessons learned at Seaside have been applied in the revival, redevelopment, and restoration of existing communities.
ROBERT STEUTEVILLE   &nbspJUN. 11, 2019

Joe Riley, who served as mayor of Charleston, South Carolina, for 40 years, told me in 1998 that every mayor should study Seaside, Florida. “It shows that the sad conventional suburban sprawl, where every development is a separate enclave, is not inevitable,” he says. Seaside is one of the most influential developments of the last four decades.

“I can’t think of another recent settlement that has influenced more professionals, elected officials, public servants and just people in general than Seaside. Seaside has allowed us to discover forgotten ideas, and it has inspired imitation, reflection, and even anger and bitterness. It has forced us to reflect, argue, collaborate, and improve,” notes urban designer Marcela Camblor-Cutsaimanis.

A Charter Awards submission by Thadani Architects + Urbanists—Phases Two and Three of the Lyceum block at Seaside—caused the jury to reflect on how this project exemplifies the town’s flexible, successional urbanism. That led the jury to formally acknowledge Seaside itself, with its painstaking, human-scaled evolution, as a remarkable laboratory of urban development with an impact far beyond that of a small vacation neighborhood on Florida’s panhandle. Seaside exemplifies the power of the principles of New Urbanism regardless of context—as it has influenced the design of new neighborhoods from low-income housing to high-end resorts.

“It’s a mistake to dismiss Seaside as a resort. For designers and developers, Seaside was—and is—a laboratory of placemaking that inspired us to change the way we think about our own projects in profoundly different way,” says planner and developer Timothy L. Hernandez.

Radiating out of the Central Square to the northwest, the Lyceum has always been reserved for public and nonprofit educational, cultural, and civic uses at the heart of Seaside. After two decades of development, the Lyceum is nearing completion of a vision to serve the town, nearby residents, the county—and artists and students from across the US and beyond.

Developer Robert Davis never compromised on a design for Seaside’s civic center that is inspired by Jefferson’s University of Virginia colonnaded green, although the architectural details have been modified many times over the years. Today the Lyceum is home to a wide range of uses and activities, including a public school—one of the best in the state—that is now being expanded to 500 students in grades K-8. The Seaside Institute and academic village have been running programs and teaching principles of New Urbanism since the 1990s. The village provides affordable accommodations for visiting scholars in reused Katrina Cottages—emergency shelter for Mississippi victims of the 2005 hurricane.

An outdoor stage and amphitheater and full colonnade were recently completed. An indoor concert hall, and culinary institute supported by the Lagasse Foundation, will soon be built. Two more academic buildings and a Town Hall serving Seaside and the nearby Watercolor community are slated for construction by 2023. The Lyceum will also host the Florida State University Gulf Coast Arts Program, continuing education programs, exhibition and gallery space, and has been home to a nonprofit radio station.

“Seaside began as a modest, but sincere exercise intended to test whether the principles of traditional community planning and design could still be relevant in the contemporary marketplace—an exercise that succeeded beyond anyone’s wildest imaginings,” says architect and urban designer Seth Harry.

For two decades the Lyceum consisted of a tent-stage and a lawn. Construction of permanent buildings began when location fees for The Truman Show made it possible. The movie paid for the first Seaside Charter School building. The creation of the academic village, using recycled cottages, was another milestone. The placemaking, incremental development, high design standards, and civic vision of the Lyceum are typical of Seaside as a whole.

“Those of us who witnessed over decades the evolution of Seaside and the Lyceum, were privileged to recognize and absorb firsthand the elegance, flexibility, and efficiency of the New Urbanism’s principles—those same principles that we have since seen transform, revive and enhance urban neighborhoods both here and abroad,” says Todd Zimmerman, Director Emeritus, Zimmerman/Volk Associates.

Seaside, as expressed through the Lyceum Block Phases Two & Three, won a 2019 Special Charter Award from the Congress for the New Urbanism (CNU). Dhiru A. Thadani is the architect of the Lyceum block, Phases Two and Three. Seaside Community Development Corp. is the client. Christopher Rodriguez and Andrew Krizman II are the architectural designers. Mark Gazda, Laura Sommerville, and Marques King are the architectural interns. Fletcher Isaacs provided drone photography. Dave Sanders Construction is the contractor. Robert and Daryl Davis are the Town Founders. Andres Duany and Elizabeth Plater-Zyberk of DPZ CoDESIGN are the Town Planners. Douglas Duany is Landscape Architect. Leon Krier consulted on the design. The winners will be formally recognized on June 14 at CNU 27 in Louisville.