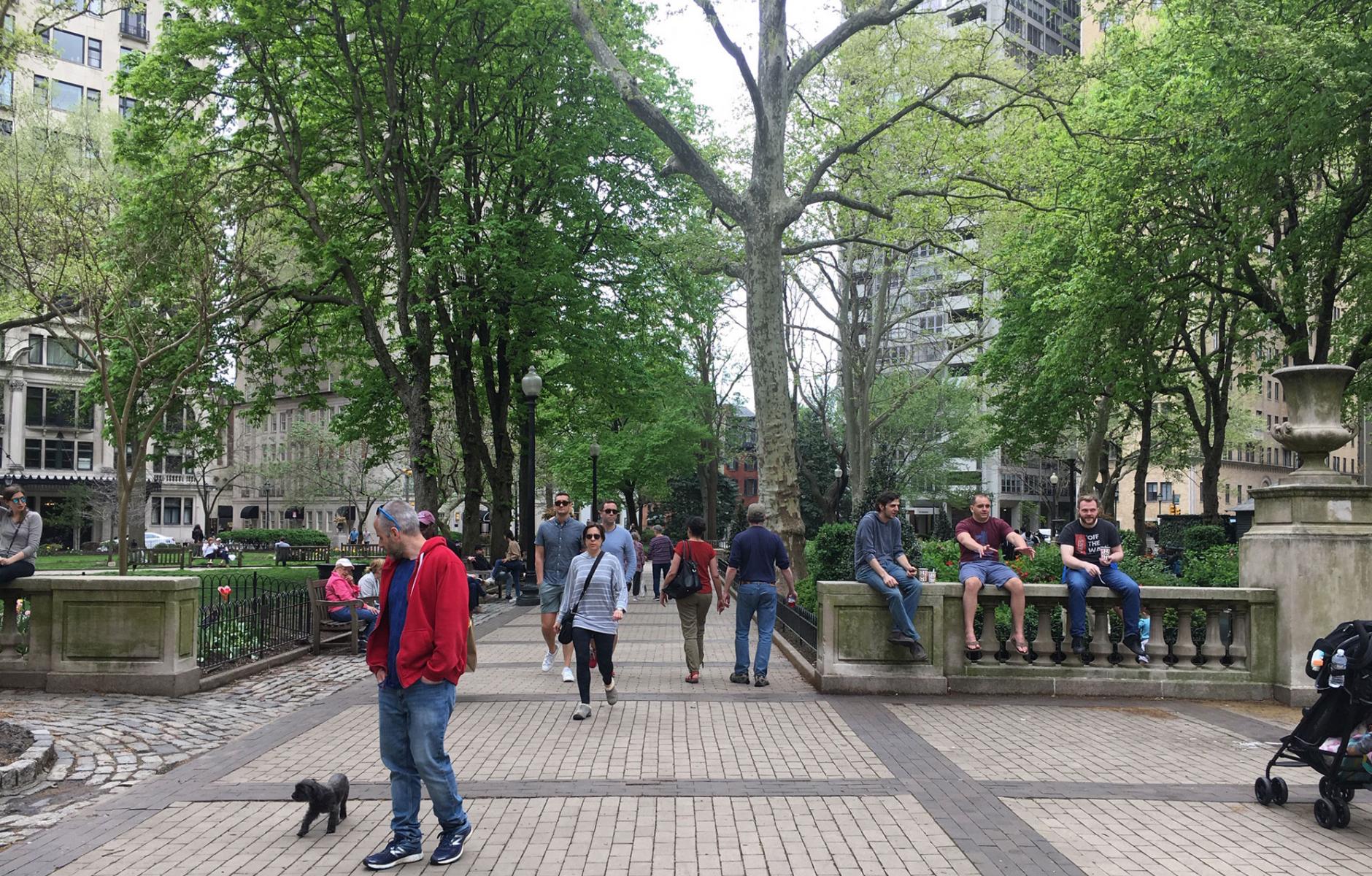 Here are ten of the best public spaces at the heart of cities in America, plus honorable mentions.
ROBERT STEUTEVILLE   &nbspMAY. 10, 2019

It seems only right that we should feature great public squares on Public Square. Squares are the outdoor living rooms of cities worldwide, and they have been planned at the center of the best North American cities for half of a millennium. The Law of the Indies required settlements to be built around squares. Colonial city founders like William Penn and James Oglethorpe made sure to include them in their plans. Century after century, they just keep giving to cities, residents, and visitors.

This square (see photo at top) is on nearly everyone’s list of great public squares in the US. It is included in Robert Gatje’s 2010 book Great Public Squares throughout the world. Rittenhouse Square is one of the five original squares planned for William Penn’s original design of Philadelphia, founded in 1682. Two of these squares have been compromised by Interstate construction, and one is the site of the current City Hall. Only Rittenhouse and Washington squares (an honorable mention) remain as great squares in the urban tradition.

It is easy to see why Rittenhouse is revered. It is a big square, surrounded mostly by tall buildings, many of them designed in art deco and Italianate styles, and there is plenty of mixed-use all around. In the square itself, everything is delightful, from the cobblestone and brick pavement, to the aged green patina on the walls, balustrades, fountains, and civic art. The trees are magnificent, providing a mix of cool shade and sunlight. Like any great square, Rittenhouse Square is always filled with people on a nice day.

The squares of Savannah, Georgia, are incomparable in character—they have almost a magical quality, as described in literature and movies, like Midnight in the Garden of Good and Evil. The historic district is famous for its 22 squares—planned by city founder James Oglethorpe—and many of them would be strong candidates for this list. Wright is one of the best. The character of the ancient live oaks, with Spanish moss, really stand out. They make the square wonderfully comfortable, even on summer days, in the hot, coastal, southern climate. The buildings all around are mostly historic, low-rise, and mixed use. The square is constantly occupied and street music often is in the air.

This is another favorite of urbanists and one of only four US squares in Gatje’s book. The Law of the Indies required a plaza (public square) at the center of each settlement. The buildings surrounding the plaza are built in an adobe style, but this wasn’t always the case. Many Victorian buildings around the plaza were redone in the 1920 and 1930s, when artists and architects promoted adobe to create a distinctive regional style for the city, according to architect and architectural historian John Massengale.

The plaza is the central gathering place for the city and a National Historic Landmark. The plaza consists of a central park with grass, shade trees, and benches. The Plaza area includes historic monuments, restaurants, art galleries and other businesses, the Palace of the Governors (the oldest public building in the US), and the New Mexico Museum of Art, notes Wikipedia.

Like many of the squares on this list, Jackson Square has a tremendous history. In 1803 it was the site where Louisiana was made part of the United States in accordance with the Louisiana Purchase. The park is at the heart of the French Quarter, where the neighborhood meets the Mississippi River. A high levee now blocks the river views from the square, although a scenic walkway has been built atop the levee on the southwest side.

On the northwest side of the square are 18th-century historic buildings, marking the city's colonial center. The most prominent of the three is St. Louis Cathedral. At the center of the square is an 1856 statue of Andrew Jackson, one of four identical statues in the US by sculptor Clark Mills. In the 20thCentury the square was famous as a gathering place for artists. It continues to host many live music events, often by big-name performers. Jackson Square was originally designed after the famous Place des Vosges in Paris. Iron fences, walkways, benches, and landscaping remain intact from the original design.

Often referred to as “Portland’s living room,” Pioneer Courthouse Square was a 1984 addition to downtown. It was originally the site of a school, then a hotel, and then a parking lot. In the 1970s, the public began calling for a square. Some designers and public officials wanted a security enclosed square to discourage transient people from using the space, but a local design team prevailed with the final open design. The square is mostly paved in brick, with semicircular steps where visitors like to sit—and it includes a fountain, sculptures, and other features. The steps also serve as an amphitheater for musical performances. Although not a historic courthouse square, this park is bordered by Pioneer Courthouse, an 1875 federal building. Pioneer Courthouse Square is a reminder that we can produce great public spaces in any era, even the 1980s.

There may be no other park in the US that rivals Washington Square for cultural history. America’s folk music revival began here, and Bob Dylan was a resident, twice, overlooking the space. Buddy Holly played in the park in the 1950s, and offered guitar tips to musicians. Of interest to urbanists, an epic battle took place over the park involving Jane Jacobs and other activists, who prevented Robert Moses from building a road through the middle of the park. Washington Square is famous for street performers, and has been for a century. Visitors mingle with musicians, jugglers, and poets. Some great historical political rallies have been held here, including 20,000 workers who rallied for workplace regulation in the wake of the Triangle Shirtwaist Fire.

At the foot of Fifth Avenue in the heart of Greenwich Village, Washington Square Park is noted for its 1889 arch commemorating the 100th year anniversary of the inauguration of George Washington. A large fountain, where children play, is also a major landmark. The fountain was built by Parks Commissioner Moses, who wasn’t all bad.

This 19thCentury square at the heart of this city is like hundreds of small-town squares across the country. Surrounded by mixed-use buildings, the square is an important focal point for residents and visitors to this quaint community in California’s wine country.

As its name suggests, Dupont Circle is not shaped like a square, but it nevertheless makes this list. Not all squares are rectangular, and Dupont Circle has all of the characteristics of a great square. The park is the heart of the Dupont Circle neighborhood, adjacent to downtown DC. Ten streets connect to the square, including the busy Connecticut Avenue. Through-traffic on Connecticut is routed under the park via a tunnel, and the Metro subway has a busy station here.

A double-tiered white marble fountain is at the center of Dupont Circle. The park is the site of many public events, including a farmer’s market on Sundays. The neighborhood is filled with restaurants and trendy shops, and is also a major employment center. Dupont Circle is the place to go to each lunch outside on a pleasant day, or for other respite from all of the nearby activity.

Campus Martius is the main public space in downtown Detroit, located at the intersection of Woodward and Michigan avenues, and other streets. It was designed as a central square in 1805, but was lost in the 1900s due to design changes accommodating automobile traffic. Although a riverfront park was built to replace Campus Martius, nothing can truly replace a great public square. Citizens lobbied to rebuild Campus Martius, and the square was reopened in 2004 after the reconfiguration of streets. The park includes two performance stages, sculptures, a seasonal ice-skating rink, and various other public spaces. Campus Martius is a reminder that public spaces, once lost, can sometimes be brought back.

The nation is now going through a renaissance in the building of civic spaces, and the 2013 Sundance Square Plaza is a prime example. This CNU Charter Award winner is the crowning achievement of the revitalization of walkable urbanism in downtown Fort Worth. By the 1980s, downtown Fort Worth was a tired and decaying place. The wealthy Bass Brothers, based in Fort Worth, funded a revitalization of a 36-block area, named in honor of the Sundance Kid, who often visited the city with his partner in crime, Butch Cassidy. Sundance Square Plaza is the central gathering spot of that revitalization and downtown Fort Worth. The plaza, as described by Wikipedia, “is a 55,000-square-foot, European-style palazzo that regularly hosts concerts, movies, festivals and other events. It includes multiple water features, including a 216-jetted fountain and 65-foot wave wall. Four 32-foot umbrellas are another focal point.”

Thanks to my new urbanist friends and colleagues who helped to compile this list. And thanks to James Schultz for giving me this idea.