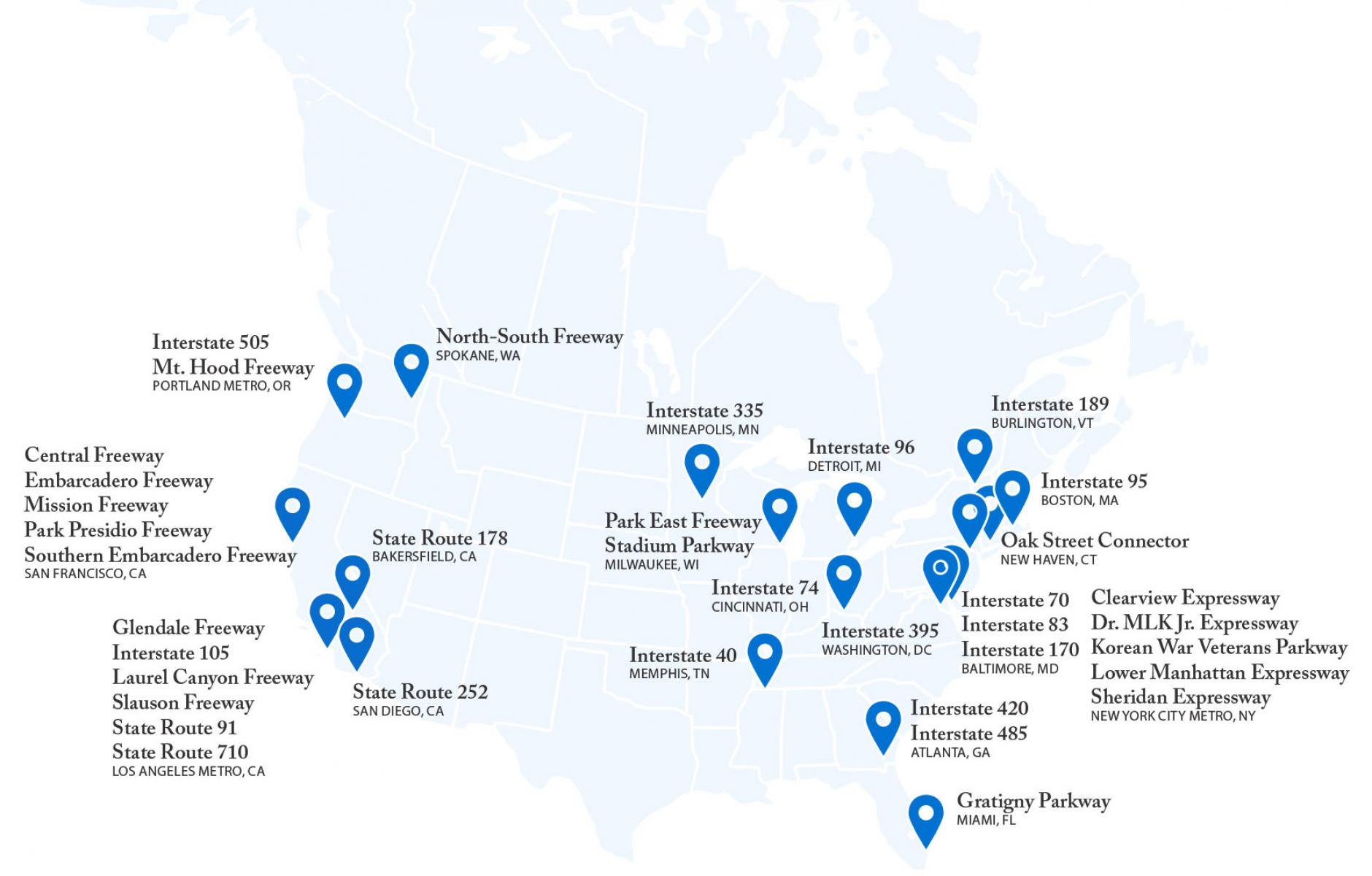 In-city freeway projects in the US that were stopped after construction began. Credit CNU.
Freeway transformation

Never too late to stop the bulldozer

Thirty-seven US urban highways were halted mid-construction by the communities in their path, saving city parks and neighborhoods from demolition.
BEN CROWTHER   &nbspAPR. 10, 2019

How late is too late for communities in the path of urban freeway construction to save their neighborhoods from the road’s negative impacts?

Many may be familiar with the story of Jane Jacobs and other Greenwich Village community activists. In 1960s they opposed the construction of the Lower Manhattan Expressway, which would have cut a swathe through modest-income and ethnically diverse neighborhood. All told, a total of 156 feet of the highway was built before the project was forced to stop.

Another example is the former Park East Freeway in Milwaukee. The highway met substantial opposition from Milwaukee residents and political leaders in the 1960s and 1970s, resulting in only a 0.8-mile elevated spur being built. The city removed this spur in 2003 and replaced it with McKinley Boulevard. The transformation opened up significant opportunities for urban and economic development in the city.

But there are numerous, less-well known examples of communities that averted highway construction at the 11th hour. The Congress for the New Urbanism has counted at least 37 urban highway projects across the United States that were halted mid-construction, by communities who saw a better way. The remaining portions of these highways and their awkward terminations are visible testaments to the communities that fought to preserve their integrity in the face of imminent freeway construction. We look closer at four cities and metro areas able to conserve their urban cores, neighborhoods, and parks threatened by highway construction.

In 1955, the U.S. Bureau of Public Roads released its ‘Yellow Book’ that contained the planned routes for urban Interstates. Among the plans were designs to connect Interstate 70, Interstate 83, and Interstate 95 in the heart of downtown. Community members, including activist and later politician Barbara Mikulski, stopped all of them dead in their tracks. I-70 just made it beyond Baltimore’s Interstate 695 beltway, but was stopped at Leakin Park, where its eastern terminus was converted into a park and ride.

I-170 was already partially constructed and intended to link with I-70. With the demise of the I-70 extension, construction on I-170 ceased. Informally known as ‘the Highway to Nowhere’, it remains a scar on West Baltimore’s neighborhoods, re-designated as Route 40. But damage was limited to only 18 city blocks.

Last but not least, I-83 was built through the city parallel to the Jones Falls. It made it as far as south as Fayette Street, but the final 4.4 miles that would connect it to Interstate 95 were never built as it encountered similar community opposition. It currently terminates at President Street, a six-lane boulevard along the east side of the city’s Inner Harbor. The City of Baltimore has discussed plans in the past to remove the elevated portion between Chase and Fayette Streets and extend this boulevard to the north, to better integrate the neighborhoods of East Baltimore with the rest of the city.

Los Angeles and the communities around it, pioneers in freeway development, also have the distinction of stopping the most urban highway projects mid-construction of any metro area in the United States. Many of these battles were drawn out over decades, with community members continuing to reject time and time again highway infrastructure.

None was more prolonged than the proposed construction of State Route 710 in Pasadena, which was originally planned as part of Interstate 710. However, protests from South Pasadena halted the highway’s construction and left a 4.5-mile gap between the northern section in Pasadena and the southern part in Los Angeles. In 1973 the city of South Pasadena, the Sierra Club and other organizations sued the project in federal court on environmental grounds. The resulting injunction halted construction for over the next 25 years.

Once environmental studies were complete in 1998, the Federal Highway issued a record of decision in favor of completing the highway, only to have the project halted again by another lawsuit. Caltrans continued to explore other options, including boring a $3.1-$5.6 billion tunnel to connect the two sections. Still, public opinion is strongly against the project. Less than two years ago, the governing board of the Los Angeles County Metropolitan Transportation Authority unanimously rejected an extension of the 710 freeway, which likely spells the end of this protracted fight. The cities of Pasadena and Alhambra are now working toward re-acquiring the land from Caltrans.

The City of Minneapolis had already acquired the land for Interstate 335 and demolition was well under way (with estimates that up to 90% had already occurred) when local residents gained ground in their protest of I-335's proposed path through their communities. With the national support of Senator Walter Mondale and Representative Donald Fraser, the I-335 Concerned Citizens Committee had convinced the city council to rescind its decision and stop the project. I-335 was finally deleted as a route by the Federal Highway Administration in 1978.

Evidence for the demolition and some partial construction is still evident in the cityscape of Minneapolis today. Stub ramps on I-35 W, some of which are now part of the Johnson Street interchange, remain as clues to where I-335 would have begun. Residential developments bounded on the west and east by NE Main Street and Central Avenue NE and on the south and north by 1stAvenue NE and 3rdAvenue NE are from a later era than their surroundings, built on the land cleared for the highway. They testify to the amount of land cleared before the project was ultimately stopped.

On March 2, 1971, the U.S. Supreme Court issued a final decision on Citizens to Preserve Overton Park v. Volpe, with a ruling in favor of the Citizens to Preserve Overton Park. By this time, the fight to preserve the 342-acre public park in the heart of Memphis from the encroachment of Interstate 40 was well into its second decade. The Federal Highway Administration and Memphis officials had first pitched the plan to route the highway through the park in 1956, but community opposition delayed the final decision to move forward with the project until 1968. Several lawsuits against the project failed and by the end of 1970 the right-of-way for Interstate had been cleared up to the borders of Overton Park, with hundreds of homes and businesses acquired and demolished.

With the clearance of the park looming, Citizens to Preserve Overton Park filed an emergency motion with the US. Supreme Court to stop the highway’s construction, which resulted in the decision of Citizens to Preserve Overton Park v. Volpe. Although other proposals were made later to route the highway through the park, they never made it off the drawing board and State of Tennessee relinquished the park’s right-of-way back to the City of Memphis in 1987. The portion of I-40 that was built up to the park’s limits was removed from the federal Interstate system and renamed Sam Cooper Boulevard.

Note: CNU's sixth biennial Freeways Without Futures report was released April 3. Freeways will be a topic at CNU 27 in Louisville June 12 through 15. Discounted registration is available until May 10th.