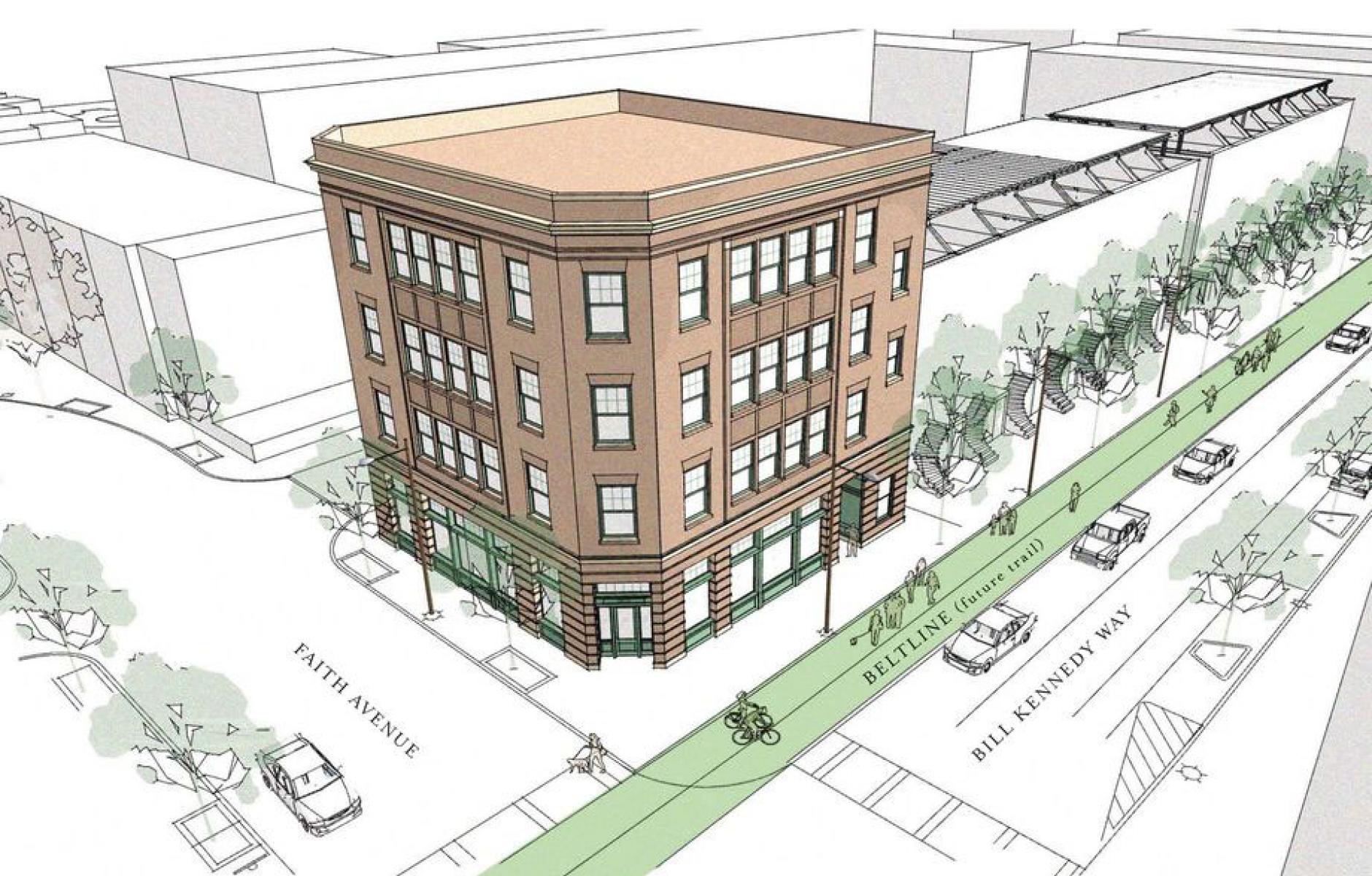 One of the last remaining buildings in Glenwood Park is under construction, by the future Atlanta Beltline. Image by Historical Concepts
Development

One of the last parcels is being developed in Glenwood Park, one of the more successful new urban neighborhoods to be built in the last two decades. Curbed Atlanta published a piece about the four-story mixed-use building on the corner of Faith Avenue and Bill Kennedy Way in Atlanta, and it seems like a good time to report on Glenwood Park, a beautifully executed new neighborhood on a former concrete recycling plant that has had a positive effect on the recent development of the city.

Glenwood Park has provided two important public spaces to this part of the city. One is the eponymous and unique oval-shaped park, surrounded by residential buildings, and the other is an intimate mixed-use urban square. Glenwood Park has had a positive impact on nearby development—now taking an urban form—and also changed regulations in the city for the better.

The resulting intimate, connected streets are critical to the character of Glenwood Park, which wouldn’t be the same without them. Charles Brewer's biggest hope for Glenwood Park was that it would restore people's confidence that humanity "can once again create wonderful, walkable, loveable places. So many of us visit the wonderful old neighborhoods of our country. or the wonderful old towns and cities of Europe, and come back home raving about how much we love them. But too many of us have allowed ourselves to believe that it is impossible to create that kind of place anymore. Well, it's not. And I hope that Glenwood Park will help raise our collective confidence level and aspirations about the kind of places that we can build today in the future."

The timing was good—the project was started in 2003, giving time for market success prior to the 2007-2008 downturn. Since then, the project has been completed incrementally without compromise to design. The latest building is designed by Historical Concepts, an architecture firm specializing in traditional design, with offices in Glenwood Park and New York City. The building will have first floor retail, Historical Concepts will move its offices to the second and third floor, and the fourth floor will also be offices, according to Curbed. The design recalls that of main street buildings from the early 20th Century.

The building is also next to a major amenity that was not envisioned at the start of the project—the Atlanta Beltline. In the rendering at the top, note the green strip on the adjacent street that is labeled as a future section of the Beltline.

Glenwood Park includes a robust mix: 375 residential units, ranging from detached single-family homes to traditional townhomes and condominiums, 20,000 square feet of office space, and 48,000 square feet of retail space. As built, Glenwood Park looks very similar to an aerial rendering for that was completed at the time of the initial design by Dover, Kohl & Partners and Tunnell-Spangler-Walsh & Associates (now called TSW). See rendering below. Note the oval-shaped park, which is even more beautiful in real life than the vision.

Glenwood Park won a CNU Charter Award back in 2003, at the time of its initial design. The implemented project has lived up to that high standard.