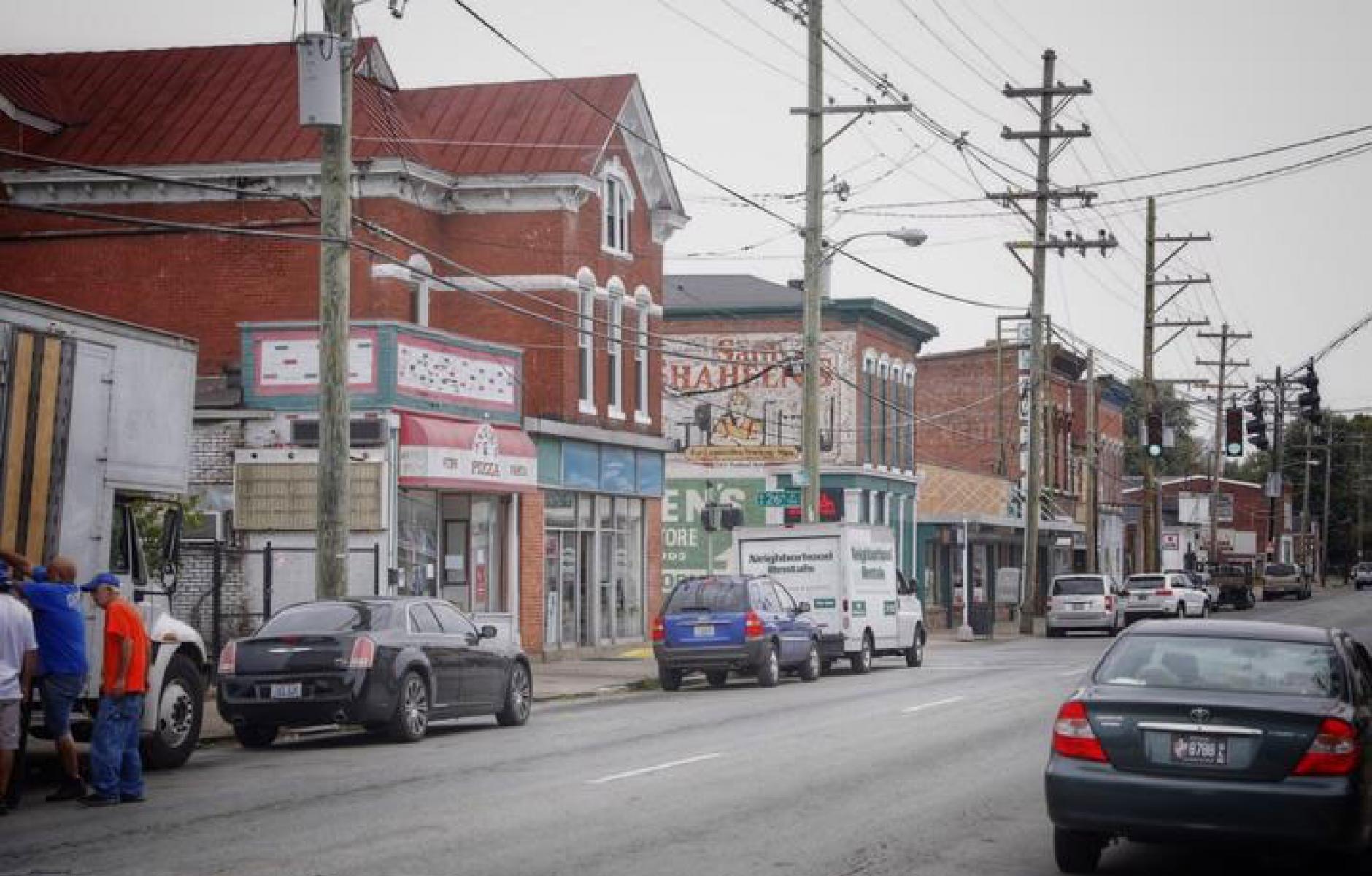 Street scene in the Portland neighborhood of Louisville. Source: University of Kentucky
Design

Three of the workshops will focus on specific neighborhoods—Russell and Portland in the West End, and Beechmont in South Louisville. The fourth event will address the seven-mile-long corridor of Beargrass Creek as it meanders through a dozen neighborhoods to the south and east of downtown.

Legacy Projects take place in advance of CNU’s annual Congress, to be held in Louisville June 12-15 this year. They offer a way for the Congress to leave an enduring mark on the host city and region. The designs are led by nationally recognized urban design firms and sponsored by local organizations. In their fifth year, Legacy Projects have a remarkable record of success—most of them have moved forward with implementation in and around Dallas, Detroit, Seattle, and Savannah, the locales for the last four Congresses. In Louisville, these projects leverage $400,000 in donated design expertise for the city.

Of all of the current projects, the 18th Street Corridor in Russell has garnered the most attention this week as Passport Health, a major health provider, announced that it was putting plans on hold for a $100 million headquarters in the wake of financial difficulties. The complex “has been hailed by city officials as an anchor development of the planned revitalization of west Louisville,” notes WFPL, a public radio station. But other developments and business startups are moving forward on the corridor and in Russell generally, including a federal Choice Neighborhoods project.

The goal of the workshop, led by Urban Design Associates, is to successfully engage residents to develop a cohesive vision for the corridor, and to incorporate this planning into the ongoing investment in surrounding areas. The project will be sponsored by OneWest, an organization active in revitalization of the West End, the historic heart of Louisville's African-American community.

Another Legacy Project, The East Portland Connectivity Project, will develop a complete streets approach to the West Main and West Market Street corridors between Downtown and the Portland neighborhood. The workshop will also explore connection to the waterfront and creating a short-term action plan to test a two-way conversion on Main Street, among other specific goals. This planning will be led by Street Plans Collaborative and be sponsored by the Louisville Downtown Partnership.

A third project, Restoring and Reimagining Woodlawn Avenue, will develop a vision for the commercial corridor in Beechmont with a multicultural and immigrant population, addressing issues of vacancy, decreased investment, local economic development, and neighborhood identity. Sponsored by the Center for Neighborhoods, the plan development will be facilitated by PlaceMakers, with help from other experts including DPZ and local firm WorK Architecture + Design.

The final project will focus on Connecting Beargrass Creek, a vital natural asset that provides rainwater drainage for 61 square miles of the metro area. A primary goal is to create a cohesive vision for physical connectivity along and adjacent to the South Fork of the creek, from the Louisville Zoo to the Ohio River—through a diverse swath of neighborhoods. Gresham Smith will lead the project, with sponsorship from the Kentucky Waterways Alliance.

Public Square will report on all of these projects, individually, in the weeks following the Legacy Project workshops.