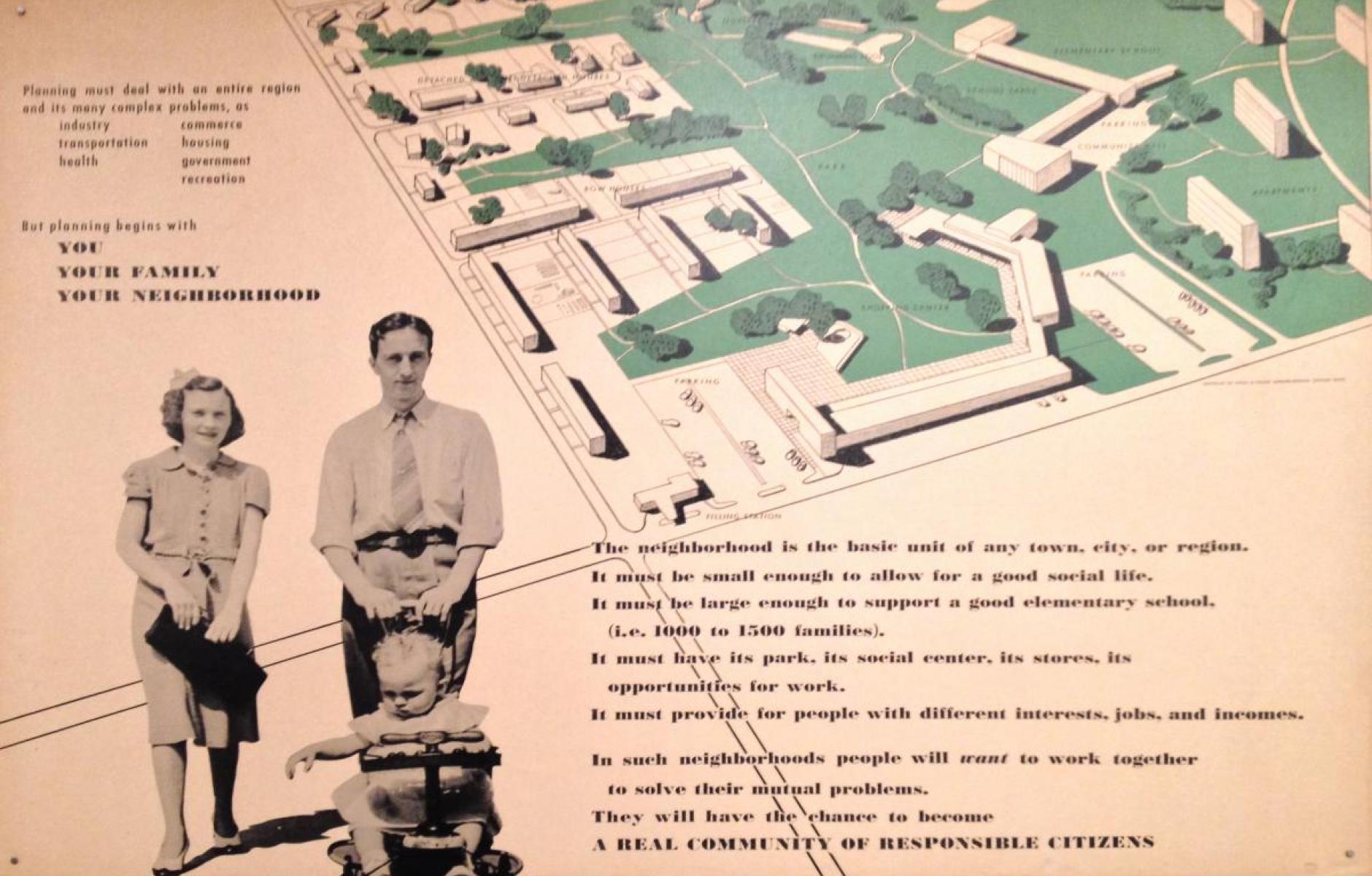 The neighborhood ideal and the household norm, 1945, from a Museum of Modern Art exhibit. In Neighborhood, by Emily Talen.
Community

Urban planner Emily Talen tells the history of the neighborhood, why it became a controversial topic, and how the “everyday neighborhood” could help a diverse America come together.
ROBERT STEUTEVILLE   &nbspJAN. 29, 2019

In the beginning, there was the neighborhood. It was where people lived, for thousands of years. “Neighborhoods are a ubiquitous condition of human settlement, found in all time periods, in all cultures, and in both rural and urban contexts,” writes Emily Talen, Professor of Urbanism at the University of Chicago, in the introduction to this copiously researched book simply called Neighborhood.

Chapter one includes a table with the word “neighborhood” in 54 languages and details of clearly articulated neighborhood types from Ancient China, to the Muslim world, to Europe and the New World. Life was very hard for millennia, but neighborhoods were socially mixed—they had to be as life took place on a smaller geographical scale—and neighborhood life was an important part of day-to-day human survival.

Then in the late 19th and early 20th centuries new planning theories, lifestyles, and technologies set in motion forces that turned the neighborhood inside out and the idea became a lightning rod for criticism. First rail transit and then automobiles allowed the wealthy to escape dense urban neighborhoods into the suburbs, and leading planners came to believe that good neighborhoods are homogenous places dominated by single-family housing. In America especially, urban neighborhoods took on the character of racial and ethnic enclaves, where leaving the neighborhood implied danger. According to a 1957 editorial of The New York Post: “A neighborhood is where, when you go out of it, you get beat up,” Talen reports.

Clarence Perry was the leading figure on neighborhoods in the 20th Century—and his ideas were copied, corrupted, attacked, and then recycled. Perry conceived of the Neighborhood Unit, an idealized version of the neighborhood based on the 5-minute walk—a quarter-mile radius to the center. The lasting appeal of the Neighborhood Unit is its “ability to embrace the inevitability of the automobile age without sacrificing quality of life.” It offered many good qualities, such as a strong center, a connected network of streets, and a mix of uses and housing types.

Yet the Neighborhood Unit had problems from the start. Perry drew it surrounded by automobile-oriented highways and arterials, a nod to the fast-emerging motorcar. For Perry, this was a feature, because it separated neighborhoods one from another. Segregation—racial and otherwise—was an emerging issue in American cities that worsened with redlining financial policies in the late 1930s, but it was de facto supported by leading planning and development theorists. Perry also imagined building new neighborhood units only in a tabula rasa format—either on greenfield sites or on land cleared for urban renewal. In the early 20th Century, Americans mostly lived in neighborhoods. There were 12,000 Perry-sized neighborhood units in the US in 1931, according to one report.

Perry’s idea was perfect for the emerging real estate development industry and planning profession, and they ran with it, “mostly in forms that greatly watered down Perry’s principles of unit-type integration, walkability, and self-containment,” explains Talen. Soon planners added low-density and superblocks to the mix. Modernist influence separated land uses, prioritized the automobile, and rejected streets as public spaces. Thus Perry’s idea of the neighborhood morphed into sprawl as the American postwar housing boom shifted into high gear in the 1950s.

“Freed from an urban form reliant on proximity and walking, neighborhoods were increasingly defined by social homogeneity, or they simply became irrelevant in any traditional sense—that is, as places where neighborhood identity and some degree of social mixing was axiomatic,” writes Talen.

Urbanists Christopher Alexander and Jane Jacobs were potent critics of the mid-20th Century conception of a neighborhood in urban renewal, new town plans, and the amorphous suburbs.

“A who’s who of urban planning dignitaries piled on the critique of planned neighborhood units as socially backward, anachronistic, and not reflective of community life,” Talen writes. Prominent Chicago Planner Reginald Isaacs went further and denied that neighborhoods exist in the first place.

Others defended the neighborhood, such as writer and urban critic Lewis Mumford for whom “the Neighborhood Unit was the ‘only practical answer to the giantism and inefficiency of the over-centralized metropolis.’ ”

The Neighborhood Unit, thus adapted to modernist ideals and encoded in land use regulations, was spread around the world. “A 1952 survey showed that 79 percent of British planners were actively implementing neighborhood units. And the British transferred neighborhood unit planning to other parts of the world.” The mid-20th Century Soviets and then the Chinese picked up the idea in superblock form—it was considered entirely compatible with communism. “The modernist version of the neighborhood unit seemed especially anti-urban,” notes Talen.

By the 1960s, neighborhood planning had become hopelessly confused. A plan for Flower Mound, Texas, based on the “anti-neighborhood planning unit theories of British planner Richard Llewelyn-Davies, show a 'calculated ambiguity',” Talen reports. A “neighborhood” is spread out on a mile-square grid with the town center on the other side of an automobile-oriented arterial road.

Social researchers applied the neighborhood model, but they did so in ways that “before the 20th Century, would have seemed completely alien to what a neighborhood is,” says Talen. Often neighborhoods were measured as census tracts, school districts, police precincts, or any other source of handy data that undermined a normative idea of a neighborhood as a physical place.

It is no wonder that when President Jimmy Carter tried to put neighborhoods on the federal policy map with the 1977 National Commission on Neighborhoods, the initiative was undermined by “little agreement about what a neighborhood actually was.”

Into this mess—just a few years later—blithely strode the new urbanists who disregarded a half-century of intellectual discussion that showed considerable contempt for the neighborhood. Inspired by Jacobs, Alexander, and the European architect Leon Krier, the new urbanists saw a clear prescription for what ailed Postwar American cities and towns. “Rather than rejecting the Neighborhood Unit and reverting to open-ended ideas of the neighborhood, the new urbanists went completely the other way and offered a model that was unambiguous,” Talen says. “There could be only two types of urbanism, they argued: neighborhoods and sprawl.”

“The new urbanists extracted what they considered the most useful parts of Perry’s model,” Talen says. They also adapted the Neighborhood Unit in important ways. For one thing, they applied the model to existing infill neighborhoods, where incremental development could take place. Also, in place of Perry’s automobile-oriented thoroughfares surrounding neighborhoods, new urbanists envisioned traffic-calmed main streets and boulevards—the better to knit neighborhoods together into a continuous urban fabric.

With the benefit of hindsight, new urbanists reverse-engineered the characteristics of the best urban neighborhoods in order to build them again. They boiled down neighborhood design to 13 attributes, Talen reports, such as: “Neighborhood buildings are diverse in function but compatible in terms of size and configuration of the lot,” and “Neighborhood open space is defined rather than amorphous.”

Resonating with the public

Clear principles resonated with professional planners and the public, for whom the term “neighborhood” had never lost its significance. Many agreed that a shopping center is not a main street, and a subdivision is not a neighborhood, whatever the intellectuals might say. New urbanists proceeded to design and build places based on normative neighborhood ideas, and they became the most influential urban planning movement of the last quarter century.

And the rest is not history, because in the parallel universe of academic theory, neighborhoods remained highly problematic. To critical social theorists, neighborhoods involve the production and controlling of space to exert power. Some go so far as to imply that providing a sense of community is a kind of “opiate of the masses,” and it runs counter to intrinsic class antagonisms. Even Harvard sociologist Robert Putnam’s plea for “social capital” is seen as a "conservative and false attempt at social bonding that relies on social hierarchy,” Talen notes.

The mid-20th Century neighborhood model was marketed along with an Ozzie and Harriet household norm. “Alternative lifestyles … political fragmentation, identity politics, social inequity—all of these social splinters have made traditional notions about neighborhood seem untenable.”

To get beyond that narrative and gain support for what is plainly good about neighborhoods, Talen offers a prescription that she calls the “everyday neighborhood,” which has eight qualities:

The concept of everyday neighborhood is consistent with new urban principles, especially as Talen goes on to describe some of these qualities—diversity demands a variety of building types and uses and walkability, since automobile-oriented planning is exclusive.

In the discussion of “everyday neighborhoods,” Talen ditches any mention of how they may impact social interaction. Claims that neighborhood form facilitates social interaction have been scorned for decades by many social scientists. New urbanists have at times made such claims, and buried in the book is this interesting passage: “A few new urbanist inspired researchers tried to connect neighboring to neighborhood form, finding that certain (mostly pedestrian-based) neighborhood forms have higher rates of social interaction, a ‘substantially greater sense of community,’ stronger place attachment, and higher levels of trust and social engagement.” Nevertheless, such claims remain too controversial and, to Talen, are unnecessary to argue for the importance of everyday neighborhoods. “There is a sense of belonging to the neighborhood, but there is not friendship or even familiarity prerequisites. … On the other hand, if the neighborhood does emerge as socially meaningful for some residents, that is a bonus.”

Everyday neighborhoods provide access to services and public spaces for those who are more closely tied to a limited geography: The elderly, the poor, and children. A supportive neighborhood context enables small developers and plot-by-plot retrofitters, which, she says, has the added benefit of supporting the diversity goal. And, she adds, “neighborhoods with a strong physical definition, which an everyday neighborhood exemplifies, have the potential to integrate diverse constituencies.”

Talen's book, which includes more than 700 footnotes and a bibliography of more than 675 titles, covers a lot of ground. Neighborhood is well-illustrated, with more than 100 figures and 20 pages of color illustrations. The thoroughness of Talen’s research is impressive, and Neighborhood is highly recommended for urbanists. It fills in some important blanks, even for the well-read student of urban planning history.

Neighborhoods are like music. There are a limited number of characteristics of neighborhoods and only 12 notes. Yet both can be put together in infinite ways, even when there are limits to what makes a good neighborhood or a memorable song in the real world. Talen suggests that delineating unique neighborhoods is a good mission for public planners, one activity for which they “still have some expertise and credibility.” To find out more about how cities and metropolitan areas can make use of everyday neighborhoods, read the book, published by Oxford University Press. 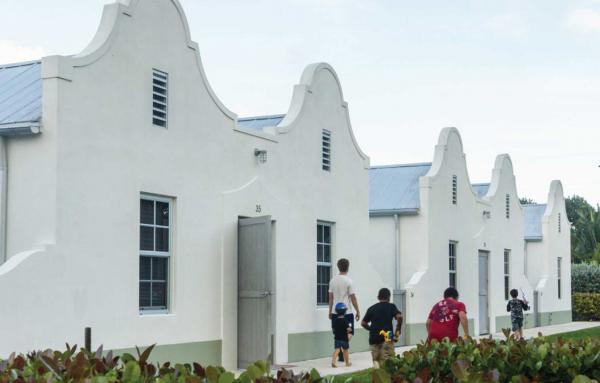