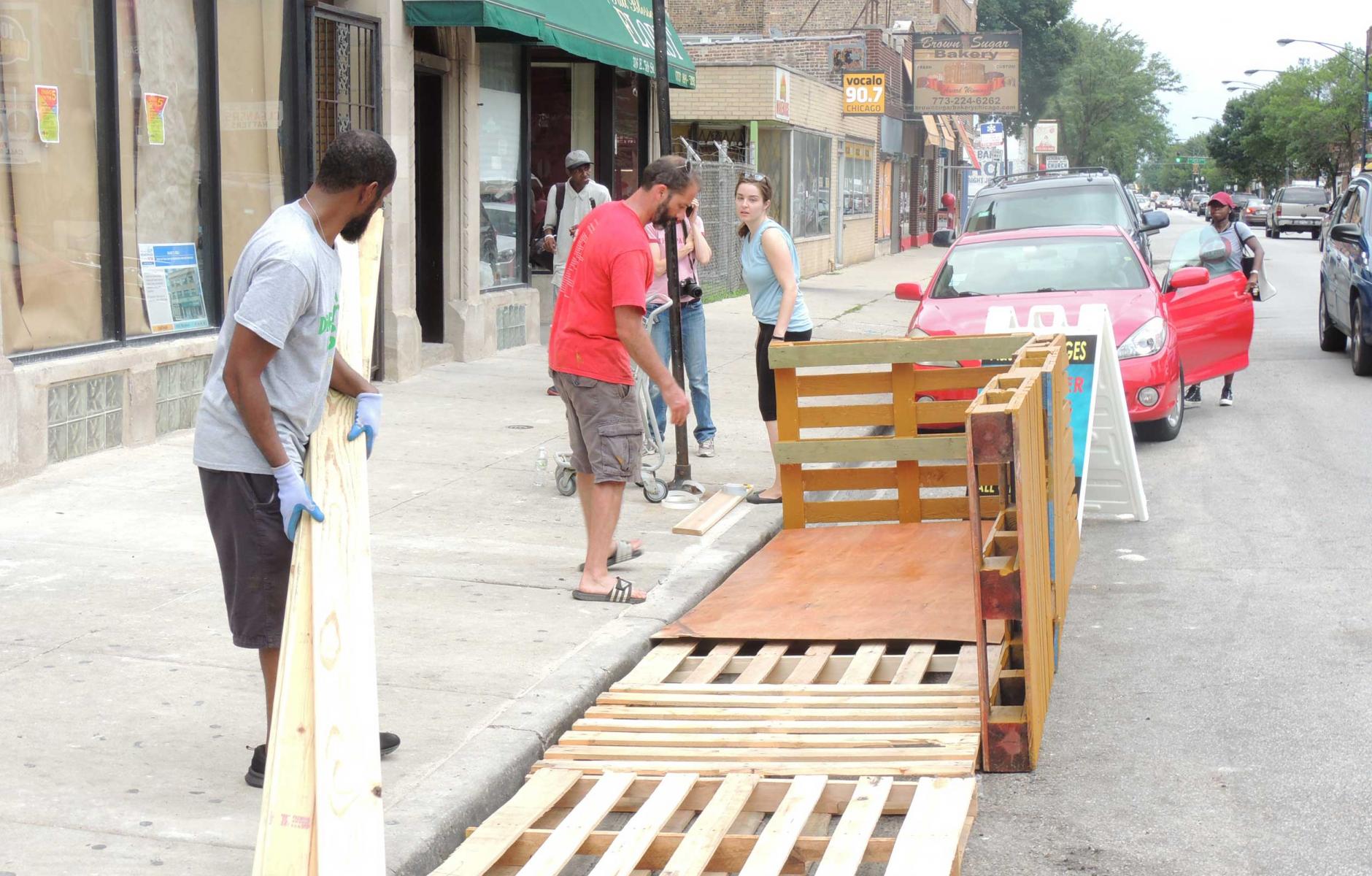 A team of Tactical Urbanists set up parklets in the Chatham neighborhood in Chicago.
Community

Highlights of a year in New Urbanism

CNU is both an organization and a movement. It's filled with members who believe in and work to implement the Charter—a document that binds us all with a vision that has withstood the past 25 years. CNU’s members are gifted, committed, persistent people who believe that by working together we can accomplish more than by working individually. As a movement, our members provided the momentum for these ground-shifting accomplishments this year:*

1) In a time when the federal government is pulling back or abandoning international climate change commitments altogether, our members encouraged and helped cities to step forward toward model solutions—most of which are from the New Urbanism playbook. At the beginning of 2017, almost 700 cities had signed the Paris Accords. Since the US officially pulled out of the Paris Accords, 7,400 cities have signed the UN Global Compact to meet the Paris agreement target numbers.

2) Our members promoted the growing recognition among those beyond CNU's membership that “affordability” depends on comprehensive, interdependent strategies captured in the Charter and advanced by member organizations such as the Center for Neighborhood Technology, Incremental Development Alliance, Opticos Design, and other advocates close to New Urbanism. In particular, Opticos Design’s “missing middle” concept for affordable, middle-density housing was recognized by The Washington Post with their coverage in December.

3) Similarly, acknowledgment is growing that economic development and responsible fiscal management depend on making urbanism easier to replicate. From the Lean Urbanism movement to the consciousness-raising of allied groups like Strong Towns, our members and partners produce paradigms for and solutions to the dilemma presented by old economic models that favor car-oriented development.

4) CNU members and allies published a number of important books and studies.* For example:

And more still. Every day in 2017, CNU members are spreading the word of New Urbanism by speaking out and acting on the Charter’s principles. Our primary focus at CNU National is to amplify and connect these efforts and successes, to fulfill the promise that by working together we can achieve more. Below are some highlights of our activities.

We released our biennial Freeways Without Futures report, which garnered attention from over 60 media outlets, including ABC, NBC, FOX, NPR, The Washington Post, The New York Times, and dozens of local news organizations. The report continues to draw attention to the possibilities for replacing poorly designed, neighborhood-destroying urban freeway segments with multipurpose boulevards, public space, and mixed-use development (as described in this recent New York Times article).

In suburban Tukwila, one of the most diverse zip codes in the United States, CNU and PlaceMakers partnered with the City of Tukwila and King County GreenTools to reimagine International Boulevard as a vibrant, walkable main street corridor. The City has already taken steps to implement some of the proposed incremental changes to slowly modify the existing arterial in a way that keeps local business, respects the mixing bowl of cultures, and provides very small-scale retail spaces that act as incubators for immigrant businesses.

CNU and its members were honored with the Richard H. Driehaus Prize at the University of Notre Dame for our contributions to the public realm. This special jury award–given once every five years–recognized the successes and significant efforts of CNU members over the past 25 years.

As I write this, we are deep in planning CNU 26.Savannah, which will be held May 16-19, 2018. Registration opens January 10, and we are already planning on record-breaking crowds.

CNU held the first-ever national meeting for active Highway to Boulevards campaigns in Oakland, CA. In addition to hosting high-level discussions on the “how” and “why” of highway removal, participants in this two-day summit helped CNU examine how the movement can better meet the needs of campaign leaders. For example, if a campaign leader needs help making a political case for highway removal, CNU will convene a working meeting on strategies for engaging political leaders. CNU will follow this effort up with a second summit of campaign leaders in September 2018 in New Orleans.

With support from the Driehaus Foundation, we expanded Legacy Projects to include efforts in non-Congress locations. Doug Farr and Farr Associates, along with local organizations and the City of Chicago, worked on Chicago’s Southside to create a tactical urbanism intervention in the Chatham neighborhood, creating “parklets” and more walkable streets in the business district. (See film about the Chatham project here).

CNU released the Combating the Suburbanization of Poverty report, which grew out of the forum CNU co-sponsored with King County GreenTools, the Brookings Institution, and the Center for Neighborhood Technology at CNU 25.Seattle.

We also culminated years of work to reform HUD and Fannie Mae financing rules to permit more mixed-use development, an accomplishment that was highlighted during a special session at CNU 25.Seattle and a follow-up article by Phil Langdon in Public Square.

CNU held its first-ever Climate Summit in the same place as the first CNU in Alexandria, VA. Through the Climate Summit, we sought to empower and enable our membership to move the needle on knowledge, expertise, and practice around specific climate issues. More than 75 people and panelists from 14 organizations came together for intensive examination and discussion of these critical issues and actions, to develop strategies, tools, and techniques that amplify existing efforts and address the identified gaps.

Rob Steuteville works tirelessly on Public Square nearly every day writing and publishing new articles from the New Urbanist community. Entirely member-supported and ad-free, Public Square registered its largest monthly audience this fall, with 41,000 page views, and has maintained that level of readership since. Increasing readership is critical for educating and informing new generations of New Urbanists.

In celebration of the 25th Congress, Public Square published a series of articles 25 Great Ideas of the New Urbanism. These are the ideas that were created and shaped by new urbanists and continue to influence cities, towns, and suburbs. The series is meant to inspire and challenge those working toward complete communities in the next quarter century and it has already met that goal with nearly 100K readers.

CNU collaborated with the Institute of Transportation Engineers (ITE) on a new volume, Implementing Context-Sensitive Design on Multimodal Corridors: A Practitioner's Handbook. The guide is a follow-up to the highly successful 2010 book, Designing Walkable Urban Thoroughfares: A Context Sensitive Approach. The new handbook acts as a how-to document that illustrates best practices for the creation and implementation of walkable mixed-use streets and includes a number of real-world case studies to demonstrate the medium- and long-term impacts of successful context-sensitive design projects.

CNU.org surpassed one million readers for the first time ever in 2017 and our visitors and followers on all platforms grew 46% from last year. We are getting good, relevant information out to people who need it and want it.

None of these accomplishments would be possible without the efforts and ongoing support of CNU members. I’m grateful—and humbled—for your ongoing support. Without you, we would not be able to advance the movement as we have this year.

As we enter 2018, we want to reignite that excitement of discovery that inspired so many people over the first 25 years. I’m counting on you to continue sharing your ideas, inspirations, and support with us as we continue to tackle the critical issues of our time.

* This is not a comprehensive list or even a list of the most important activities or publications, but is offered as a small sample of the magnitude of CNU member work.