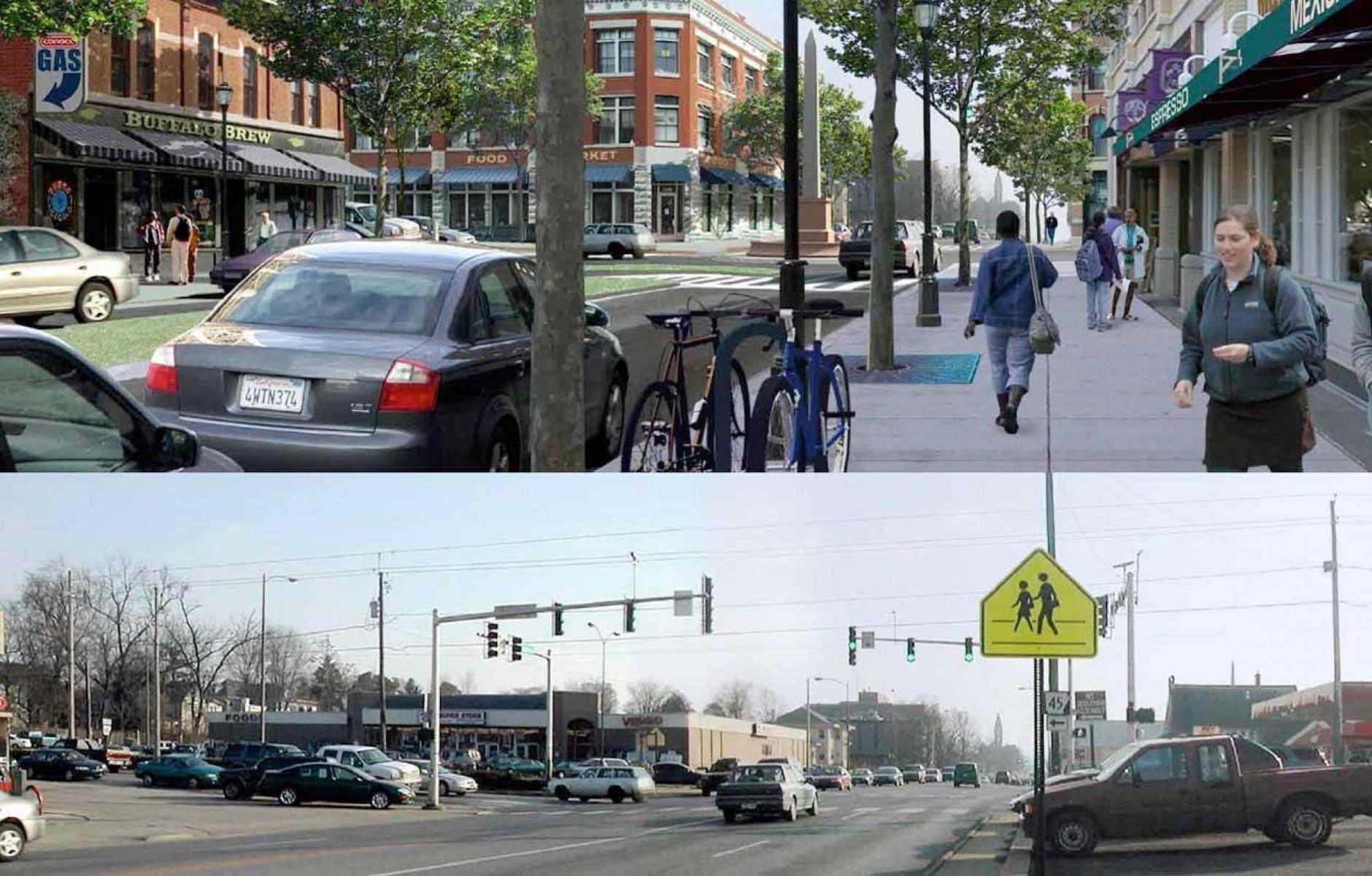 System A and System B

Imagine we have two systems for building communities that exist side-by-side and can be studied empirically—call them System A and System B.

System A works better for the economy, environment, health, and social welfare.

Our policies give advantages to System B.

That sounds like Bizarro world. It is America in most places.

System A is the walkable, mixed-use neighborhood. It has smaller streets, simpler intersections, and small blocks. It includes many kinds of places, from downtowns to main streets to mixed residential neighborhoods and even leafy suburban blocks of single-family homes.

System B is conventional suburban development (CSD), or, simply, “sprawl.” It has very large blocks, intersections, and main roads. These arterial roads are lined with single-use shopping centers, office parks, and subdivisions with looping streets and cul-de-sacs.

Mixed-use communities are more marketable today than they were 20 years ago and planners and many developers have come to favor walkable design, but that hasn’t changed the underlying rules and infrastructure that make CSD the only reasonable option in large areas.

Street construction policies and zoning regulations adopted during the last seven decades make walkable neighborhoods very difficult to build.  If you want System A, you must fight the system and make painful compromises—or use the streets built 100 years ago by our ancestors. The latter option is the route developers are taking to meet market demand—but those old street grids are in finite supply.

System B, conventional suburban development, rules the day in about 90 percent of the land in most metro areas. System B is oversupplied, so it is devaluing itself. It continues to be built mostly because of policies and regulations. The White House this week said local land-use policies, many dating from the 1970s, are damaging to our national economy and need to be reformed. This widespread favoring of single-use, low-density development is the primary problem, in my view.

Where to find walkable places

We have walkable places in Red States and sprawl in Blue States, and vice versa. The only difference is that Red States often allow sprawl to be built more quickly.

Cities and suburbs do not perfectly represent the two systems. Most suburbs have walkable places—towns, former streetcar suburbs, or small cities. Most core cities have sprawl within their borders.

In recent years these two systems have been the subject of comparative study, made easier by new technologies. A website called Walk Score, for example, gives a walkability rating of 0 to 100 for every address in the US.

Comparing A and B

The walkable neighborhoods were built before the automobile age. No traffic studies, parking regulations, or the demands of big-box stores informed their design. Although they have been extensively modified (and often damaged), they retain many of their original characteristics. One might suppose they’d be less safe and efficient today—yet they are not. In nearly every respect, walkable places perform better.

It’s as if we had two fully functioning medical systems. One performs better in all trials, yet its equipment and techniques are banned from new hospitals.

The advantages of walkable neighborhoods are astonishly wide-ranging. The following are highlights of place-based research:

• Health. Historic street grids are associated with lower obesity, blood pressure, and heart disease, researchers found. A meta-study found health, safety, and social benefits in walkable neighborhoods compared to CSD. Residents of walkable, compact neighborhoods get significantly more exercise, according to an international study from May of 2016.

• Traffic fatalities. Researchers Norman Garrick and Wesley Marshall found that the historic grids produce one-third of the traffic deaths per capita compared to sprawling suburbs. The large roads and "forgiving design" employed in conventional suburban areas increases injuries and deaths, and is one reason why the US lags behind all over wealthy countries in traffic safety.

• Social mobility. The higher the Walk Score, the more people are able to climb the economic ladder from poor to wealthy, according to this study.

• Crime. Higher Walk Scores are “associated with decreased property crime, murders, and violent crime in neighborhoods where minorities made up less than half of all residents. The same held for neighborhoods that were 75 percent white,” notes Richard Florida.

• Social engagement. “Denser, more walkable urban environments have also been said to spur more social interactions of the sort that encourage creativity,” according to an upcoming Carnegie Mellon study.

• Employment and economic impact. A nationwide office study determined that vibrant, mixed-use centers are preferred over single-use office parks by 83 percent of office tenants. Mixed-use urban centers account for as much as 50 percent of new commercial real estate development, even though they occupy only about 1 percent of the land, Christopher Leinberger found.

• Real estate market. A single additional point in Walk Score adds $3,000 in value to a house on average, according to a nationwide study. The biggest unmet desire in the housing market, according to the report called Who’s On Board 2014, is to live in a mixed-use neighborhood. Conversely, people living in single-use residential areas express the most dissatisfaction with where they live.

• Congestion. One might suppose that traffic congestion would be one metric where sprawl would have an advantage, given how much money goes into wide arterial roads. But an Arizona DOT study determined that compact, mixed-use areas reduce automobile use and disperse traffic.

Despite the research, sprawl remains the default way to build new communities outside of historic cities and towns. In the modern world, roads and zoning are a factor in everything that is built.

When zoning was adopted and expanded in most communities, our nation widely believed that dispersed, disconnected development was the future. The purpose of the zoning was to enforce increasingly strict separation and keep density low. New publicly financed roads and other infrastructure helped make this vision a reality nationwide in the second half of the 20th Century.

After decades of this practice, sprawl was assumed to be the only model. The New Urbanism, beginning in the 1980s, attacked that notion. Prototypes of new communities were built and the demand for living in historic cities and towns grew.

In time, researchers realized that System A and System B could be compared side by side as competing models.

Fortunately for us, pre-automobile-era cities and towns survive to be studied: Many were damaged by 20th Century zoning, highway construction, redlining, “urban renewal,” and middle-class flight. But their bones—the gridded streets, and many historic buildings—are resilient.

The question is what to do now. Should CSD be the default model, the easiest way to build, supported by public infrastructure and policy? The answer is clearly no. We shouldn’t be compounding the problems of our built environment. That wouldn't help ourselves, our children, our current cummunities, or our legacy.

That doesn’t imply that we should get rid of sprawl. More than 70 million houses have been built since World War II, most using the conventional suburban model, and they are here to stay. We don’t need a repeat of 20th Century urban renewal that knocked down neighborhoods. If someone wants a house on a cul-de-sac, these will likely be plentiful for generations to come based on current supply alone. More will be built until policies change. To the extent that even more suburban-style houses are in demand after that, these can be built in new walkable neighborhoods.

Similarly, suburban retail is in abundant supply—especially given the ongoing shift of shopping to the Internet. To the extant that more retail stores are needed, these, too, can be built in walkable areas. Walmart, Target, and other retail giants are building urban stores that fit on main streets and in downtowns. Corporations in suburban office buildings, for their part, are widely migrating to central business districts and mixed-use centers.

One strategy is to retrofit the suburbs, slowly but surely, as commercial sites become available to be converted to town centers and streets are rebuilt.

Change on the way

That’s why it’s promising that more than half of the states and nearly 700 total jurisdictions have recently adopted "complete streets" laws that call for streets to be designed and built for all users, including those on foot and bicycle. Unfortunately, the transportation-engineering field often interprets these laws to mean conventional suburban designs with bike lanes, sidewalks, or crosswalks added.

For true walkability we need traffic calming, smaller intersections, and smaller blocks. To create more walkable places, we need to retrofit some of the suburban arterial roads. This happens rarely, but when it does happen, the economic returns are often astonishingly good. The retrofits cost money and take time, but the job can start cheaply—with paint. The research shows that 10-foot travel lanes are safer than 12-foot lanes—the suburban standard—in metropolitan areas. Ten-foot lanes are less expensive to build and maintain.

Many developers are on board with New Urbanism. Why should they have to go through extra hoops, spend more money, and make compromises—or be restricted to historic street grids?

For those who still want to build CSD, the burden should be on them. They should demonstrate why sprawl is the best model for our communities in the future.

Given the research, government should change its policies and practices to allow mixed-use neighborhoods to be built again in proportion to the need and demand for these places.