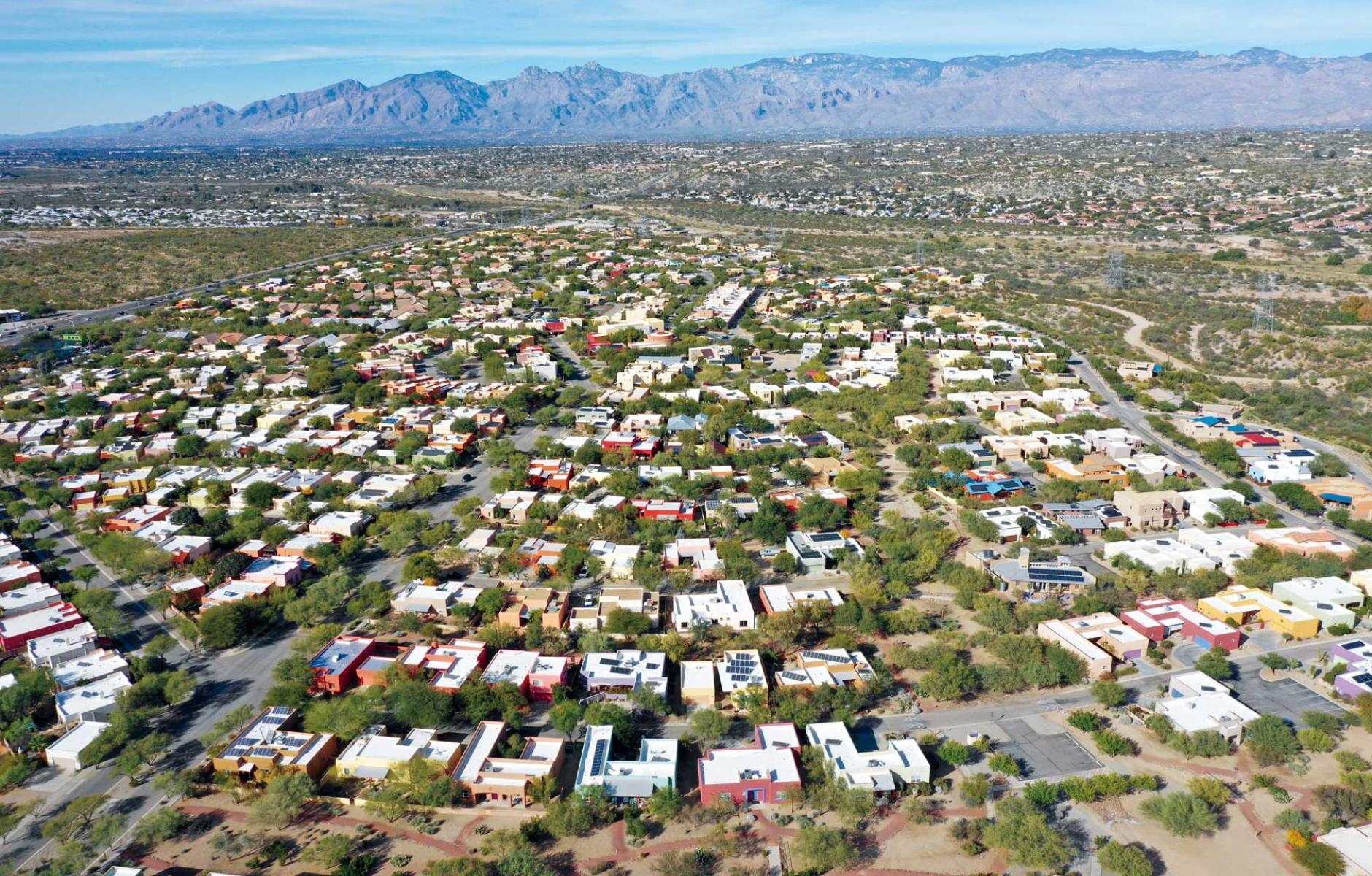 Vision of a ‘solar village,’ realized by New Urbanism

Civano New Town is a groundbreaking fusion of New Urbanism and green design that has proven the efficacy of both together. Moule & Polyzoides, Architects and Urbanists won a 2022 CNU Charter Award in the Neighborhood, District, and Corridor category.
ROBERT STEUTEVILLE   &nbspMAR. 22, 2022

Beautiful to look at, culturally sensitive, and measurably sustainable, Civano New Town in Tucson, Arizona, was ahead of its time. Planned in 1996, Civano set a standard for what was then a radical idea—combining New Urbanism and green design.

Due to economic and ownership circumstances, only one of three planned neighborhoods was fully built out as envisioned. While the dream was truncated, this cloud has a silver lining. Civano emerged as an urban design laboratory: One neighborhood built as planned, another with green features but not New Urbanism, another entirely conventional.

As such, Civano is one of the most academically studied new urban projects, with impressive findings for climate mitigation and livability. The community’s maturation over the last 20 years vindicates the principles of New Urbanism and the Canons of Sustainable Design.

The new urbanist neighborhood consists of 645 living spaces on 345 acres, plus mixed-use neighborhood center buildings. Included are a range of public spaces, from tot lots to a 2-acre park, an extensive walking trail network, and preserved open space. The architecture is inspired by Southwestern vernacular styles. The design ensemble, from building to block to neighborhood, is unique.

“Once in a great while each of us is lucky enough to have an opportunity to clearly see the future,” said Vice President Al Gore in April of 1999. “Today, the grand opening of Civano is one of those unique times.”

Civano was the product of many years of planning, prior to New Urbanism. In the wake of the “Arab oil crisis” in the 1970s, forward-thinking Arizonans saw an opportunity to build what was originally dubbed a “solar village.” Continued advocacy over two decades resulted in the first new urban charrette in the Southwest, according to the project team. From the start, the goal was to meet aggressive standards set by the City for energy use, water use, solid waste creation, and transportation/air pollution.

Working with the developer, builders, and the City, Civano’s design and implementation achieved a series of important milestones, the team told CNU.

“At a minimum, sustainable development requires community support; Civano owes its very existence to the countless individuals who imagined, persisted, and achieved this vision,” says the project manager for the City of Tucson. “Nevertheless, the social accomplishments alone were insufficient to assure its success. Without the exquisite urban design that so deeply understood and gracefully expressed Civano’s spirit, it might remain just a dream.”