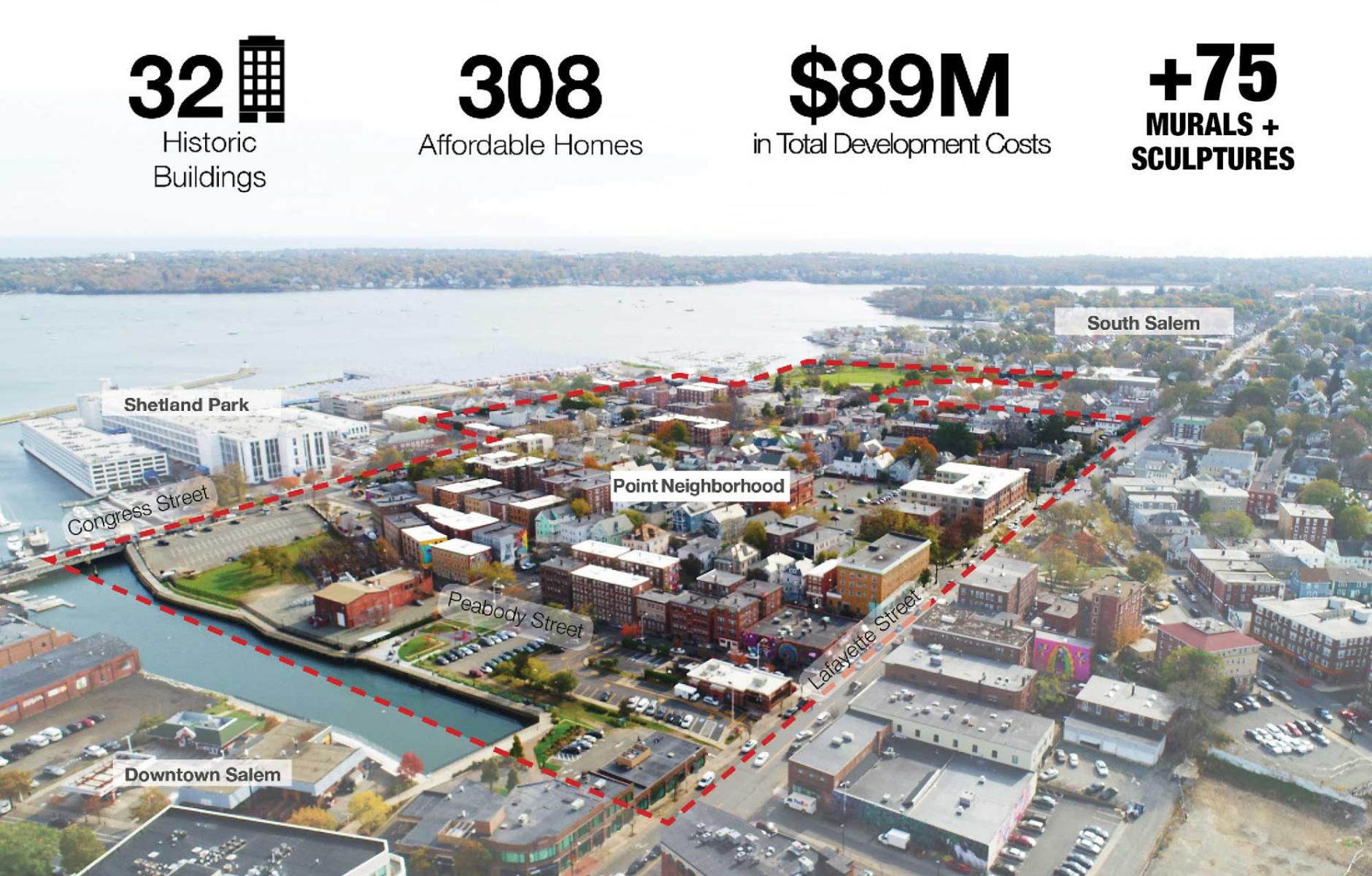 The transformation of The Point, a 50-acre immigrant neighborhood with a large Dominican population, began in 2013 with a Vision and Action plan that quickly moved to implementation. “With 32 historic buildings, 350 affordable homes, more than 75 murals, The Point has received investments of over $89 million in development costs and $1.4 million in infrastructure investment,” according to the North Shore Community Development Coalition. “We invested $250,000 in the creation of PUAM (Point Urban Art Museum) to bring public art to the area and reduce the stigma of The Point.”

One of the more unusual and noteworthy developments in the neighborhood, the outdoor museum PUAM was launched in 2017. Focused on a three-block radius at the north end of The Point, PUAM consists of more than 75 large-scale murals as long-term installations by world-renowned and local artists, as well as a smaller collection of rotating murals/exhibitions.

“These murals are not just about beautifying the area, but transforming the way people identify with the Point neighborhood. This creates such a positive experience for residents who live inside and outside of the neighborhood,” says Mayor Kimberley Driscoll.

The plan identified the need for community space in the densest neighborhood in Salem. The answer is Espacio, a 2,000 square foot community space that is centrally located on the first floor of a Coalition affordable housing property. Community partners offer 30 programs a month in English as a second language, financial literacy, a mobile food pantry, immigration classes, tax preparation services, a pop-up library, and more. Residents get free Internet and the space is also reserved for community and family events for a nominal fee.

A small business incubator has been set up in a previously vacant storefront in the neighborhood, to help small business owners in the Point. The incubator offers assistance in marketing, branding, merchandising, and other skills. An old bowling alley was converted to a youth development workshop with programs to develop job skills and other important qualities.

The revitalization has two distinct parts. What the Coalition calls “inner work” began with its public engagement process and developing resilience within the community. Inner work included affordable housing development in multiple buildings across many blocks, resident engagement and leadership development, and ensuring project cohesion. “We came to the project with a commitment to equity; focused on serving the neighborhood’s long-term residents first and newcomers later,” the Coalition reports.

The “outer work” began after the initial work was well underway, and was focused on engaging and inviting the larger community in. PUAM is a primary example. The art museum built on Salem’s strong tourist economy to bring visitors and leverage investments from the city, state, and philanthropic groups. The murals showcase the neighborhood’s cultural heritage and promote resilience. The art on deed-restricted affordable housing reinforces a notion of a “high quality low-income” neighborhood, says the Coalition.

The neighborhood revitalization is remarkably comprehensive in scope. Still other programs focused on storefront revitalization, special events, and public spaces. A renovation and redesign of Palmer Cove, a large public park on the ocean, is being completed in 2022. Three neighborhood parks were renovated in 2017 and 2018.

“What sets the Salem project apart is it’s scale, and also the determination that the neighborhood remains one that belongs to the people who have lived here all along,” reports The Boston Globe.