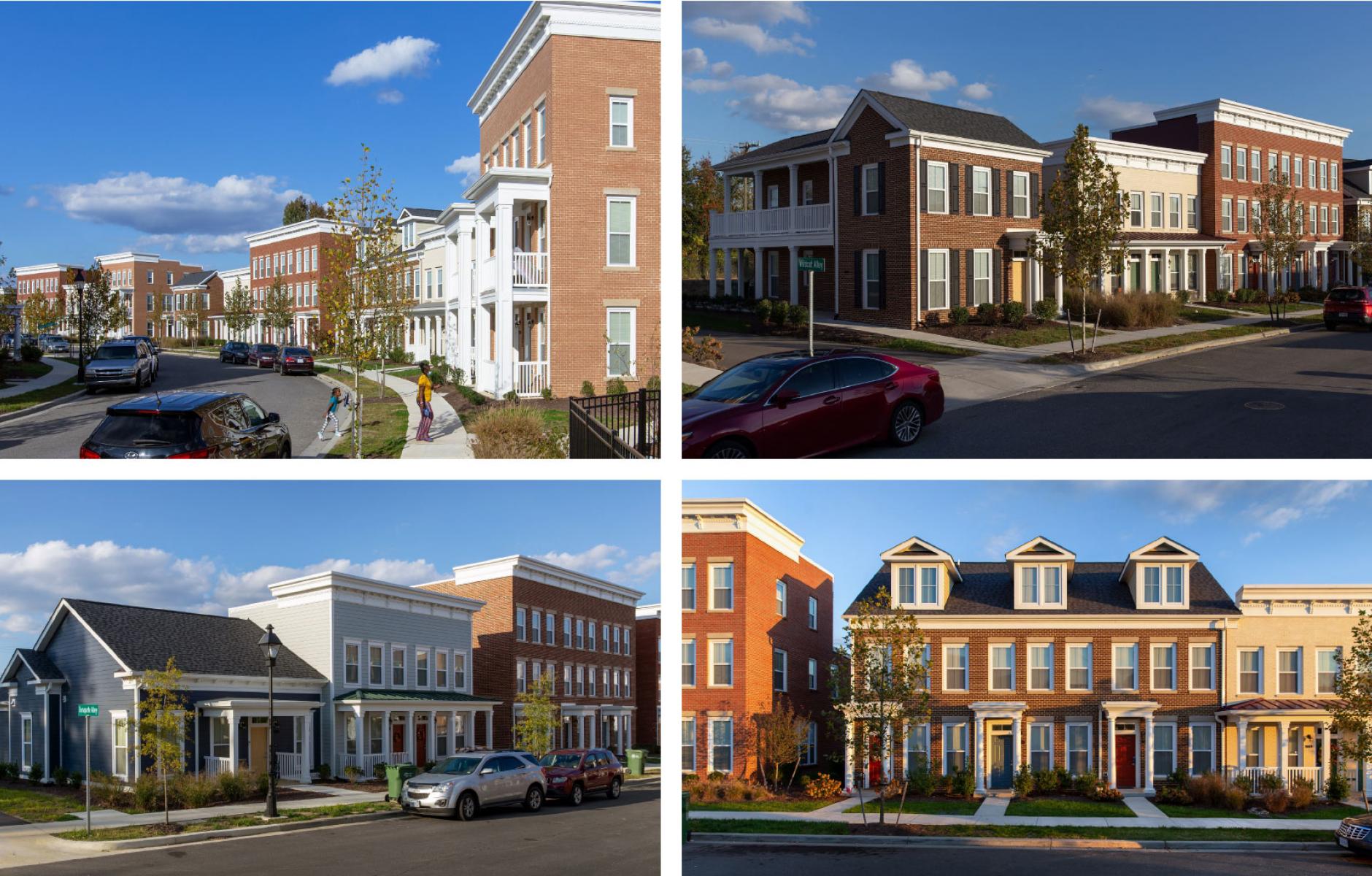 The revitalization takes a big step in the reclamation of Richmond’s East End, as illustrated by the detail of its architecture and the range of building types. Source: Torti Gallas
Equity

Bringing the best parts of town to a disadvantaged area

Church Hill North—Armstrong Renaissance is a 22-acre extension of a disinvested neighborhood in Richmond, Virginia, addressing long-standing social issues while respecting the city’s proud architectural heritage. The design guarantees a high quality of urban space in a development that is affordable to very low-income families.

The nearly complete project is the first move in the redevelopment of Creighton Courts, a large area of mid-century, low-rise public housing, at the end of its design life, in the East End. Church Hill North—Armstrong Renaissance includes the construction of 256 living spaces on the site of the former Armstrong High School. The project represents a “build first strategy” for Creighton Courts—as opposed to “demolish first”—ensuring that there will be no displacement in this or future phases.

The architecture and landscape design physically defines streets and public spaces as places of shared use in the tradition of Richmond’s best neighborhoods, according to the design team. The design includes porches, alley-closing accessory buildings, and a streetscape that encourages neighborliness and interaction. A mix of housing types—bungalows, duplexes, townhouses, and apartment buildings that are inspired by the city’s vernacular—is provided to meet a variety of individual and family needs. All of the units meet green building (EarthCraft) standards.

Public spaces include a pocket park, a green, and squares framed by a boulevard. A 3,700 square foot Neighborhood Center on the green is a social focal point. The urban design extends the historic block fabric of the adjacent neighborhood onto the large, former high school site.

The project responds to lessons from HOPE VI and HOPE VI-type housing revitalizations, which CNU and its members influenced in the 1990s and the early 2000s. Some aspects of HOPE VI were excellent, namely the principles guiding its urban design. Those principles are continued in Church Hill North—Armstrong Renaissance and many similar developments. Other parts were flawed—its lack of one-to-one replacement of housing units and the phasing policies that displaced many families. Torti Gallas describes two focal points of criticism:

Church Hill North—Armstrong Renaissance short circuits displacement through its phasing and one-to-one replacement. “CNU was an important advocate and engine in shaping HOPE VI policy and the implementation of its physical forms. CNU should remain proud of an ongoing legacy that responds to criticisms of that program, as illustrated at the Church Hill North—Armstrong Renaissance,” the design team says.

Armstrong High School is in its fourth iteration, notes the design team. “Founded in the late 19th Century by the Freedman’s Bureau, [the school] has continuously served the secondary education needs of Richmond’s African American youth. The 1951 site and structure closed in 2004, with the school relocating one mile north in the East End.”

Recognizing the high school’s social and cultural legacy is a cornerstone of the design, including tree preservation from the school courtyard and the redevelopment name, a park, and the new Neighborhood Center paying homage to the school’s memory.

The East End is an often-neglected neighborhood, with a large share of the Richmond’s public housing. Among the project’s goals is remapping the City’s 20th Century geography of segregation, the design team says.

“The design of Church Hill North brings the best parts of town to Richmond’s previously neglected and purposefully segregated East End, where mid-20th Century policy concentrated public housing and disconnected the community from the rest of town with the insertion of highways and railways—literally on the wrong side of the tracks.”

Church Hill North—Armstrong Renaissance brings the character of some of the City’s aspirational, historic neighborhoods back to the East End, “as a shared heritage striving for equity in the 21st Century,” the design team reports.