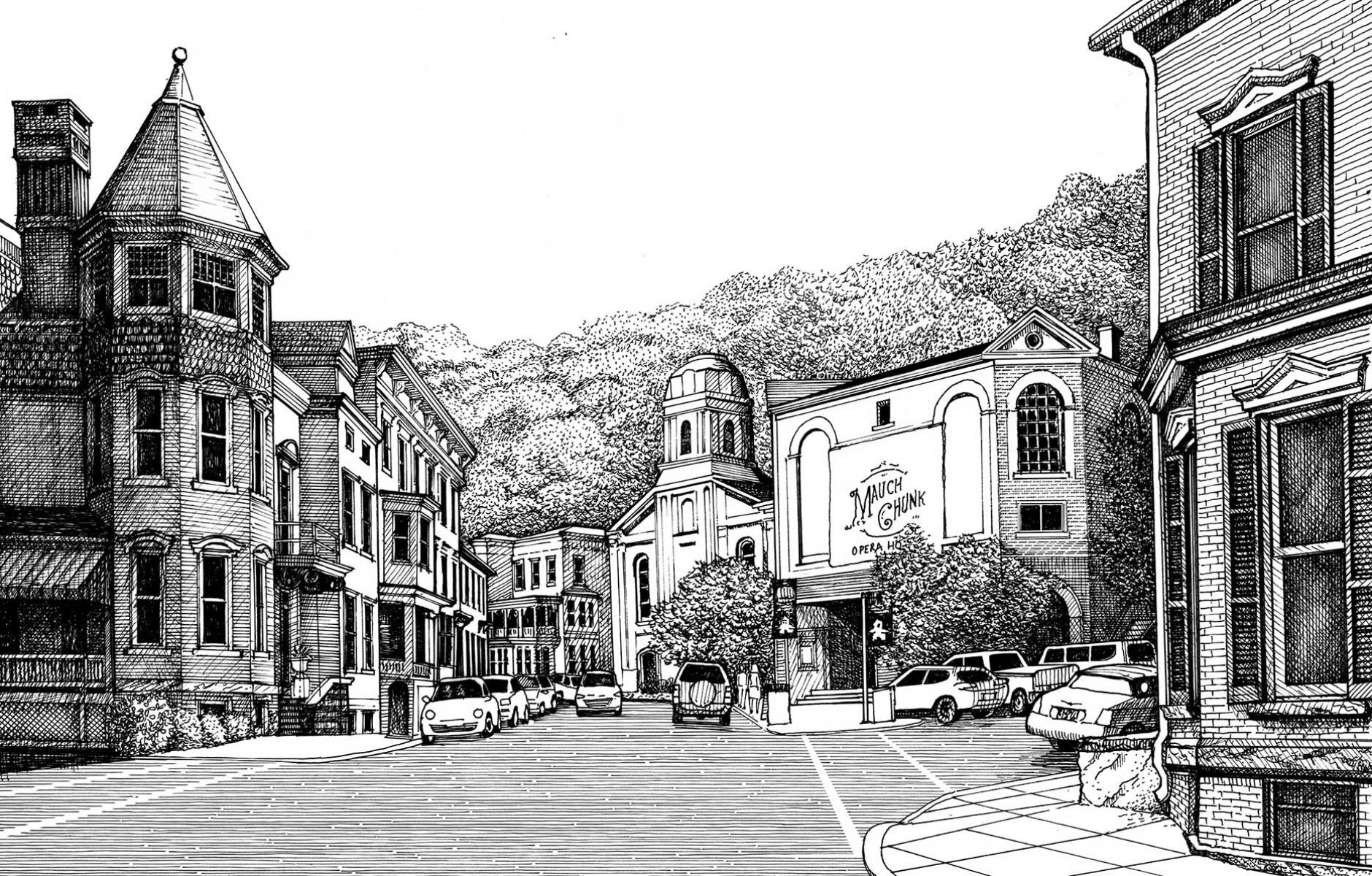 With a little love and attention, towns may play a key role in settling climate migrants and balancing urban development in the 21st Century.
DHIRU THADANI   &nbspJAN. 31, 2022

Small towns are deeply imbedded in the history of many countries. Indeed, they were the founding settlements, and remain a vital part of a country’s culture. We need small towns and rural settlements just as much as we need cities. This is not an either-or proposition.

Regenerating and repopulating these communities would advance the middle ground between rural and urban settlements. Success would provide a viable antidote to suburban sprawl and the detrimental over-consumption of arable land. Acknowledging that there should be a balance between cities, towns, and rural communities is essential to responsible stewardship of land and existing infrastructure that ought not be squandered. All these towns had a reason for being, their founders had grand aspirations, there was employment available, and the settlers believed in the promise of a community and better life for their families and themselves.

The word ‘town’ is difficult to define, as the meaning varies by region, state, and country. The key issue is scale. A town can generally be defined as a place of human habitation that is larger than a village but smaller than a city. And yet towns go by various legal names that may be confusing. In Pennsylvania, many towns are called boroughs. In New York State, many are called villages. Some communities are legally classified as cities, but with populations of less than about 50,000, still function as towns.

Some jurisdictions differentiate towns from hamlets and villages on the basis of their economic engine being derived from industry, commerce, education, public service, or county seat with a courthouse, rather than primarily from agriculture or related activities. Towns in the United States often have legally defined borders and a distinct local governing authority, and are referred to as "incorporated towns.” Places that do not have an independent governance structure, and are administrated at the county or state level, are frequently referred to as "unincorporated towns.”

Regardless of these varying definitions, small towns have played a major role in American literature as in other societies, and there continues to be substantial public sentiment for small town life and community. Many deem small towns to be necessary for the success, security, and continued existence of the country.

Many small-town residents believe that the roots of civilization are embedded in such elemental qualities as good will, neighborliness, fair play, courage, tolerance, patience, and broadminded inquiry that can only be transmitted and nurtured between generations in small town communities. Newer residents moving to small towns often credit the value system, a slower pace of life, safety and security for their children, control over their personal time, and the low cost of housing as primary reasons for relocating there. The erosion of this culture has had a direct relationship to the decline of the nation’s humanity.

In regard to day-to-day social life, the choice to reside in a small town is related to the fact that the most revered towns have some elements of urbanism embedded in their DNA. Everyday life is commonly organized around a bustling Main Street lined with small shops and restaurants. These are places where inhabitants come together and have serendipitous encounters with each other, often at crossroads in the center of town where one can experience the benefits of parking only once and walking to access daily needs. Sociability is enhanced at key places such as the town green or common where communal events occur, like a concert, the Farmers Market, the placement of the town’s Holiday Tree, or to just sit on a well-placed bench and enjoy the theater of life.

In formal terms, these moments of unexpected encounters, social life and communal vitality in a small town share the same physical attributes as thriving cities. Buildings in the core of towns touch each other; buildings are built to the front edge of the property with no setback from the public right-of-way; both sides of the street are lined with similar-scaled buildings that spatially define the public realm; buildings are entered from the public right-of-way and their entryways are prominently visible; and the facade is perforated with windows offering ‘eyes on the street’ that keep civic behavior in-check and provide security and safety for passersby.

The unfortunate reality for most of the 40,000 general purpose local-government towns in the United States, including 20,000 incorporated towns, is that big-box retailers have bankrupted mom-and-pop stores and have decimated their Main Streets. The beloved family-run businesses have shut down, and the most familiar landmark buildings too frequently are derelict relics. Fifty years ago, the majority of America’s population resided in small towns and rural settlements. Population decline is related to smaller average family size, and the exodus to metropolitan areas for higher paying employment. The number one lament by small town parents is that their educated children find no compelling reason to return to their hometown.

The economic decline within small towns is largely based on the demise of the primary economic engine, such as the closing of a factory, out-sourcing of production and jobs, and the country’s shift from manufacturing toward the service industry. On the positive side, many small towns have an infrastructure-laden grid of streets and a robust building stock. In many cases they were once connected to the breadth of the country by the railroad or river transportation systems, and more recently by the national highway system.

The enhanced location, existing infrastructure, and embodied energy in the building stock warrants a closer examination and study, to determine the possibility of reviving many of these small towns. These places can offer a viable alternative to urban and suburban living. Resurrection of towns across the globe could fulfill the desire of many to enjoy the benefits of small-town living.

Global increases in natural disasters are scientifically proven to be the result of the earth’s warming ever since the industrial revolution. Sea-level rise, increase in the frequency and magnitude of hurricanes, high wind speeds, tsunamis, droughts, and reoccurring floods will soon force coastal residents the world over to migrate to higher ground. Vast populations will need to move inland. Estimates indicate that there will be 500 million to 2 billion climate migrants by 2050. Small towns may just be the answer to receive these climate-migrants.

Aside from climate-migrants, there has been a continual migration of refugees fleeing their homelands for political and ethnic intolerances. Democratic countries are hesitant to accept this persecuted class. However, repopulating small towns with refugees could be a step toward assimilation into their new country’s culture and norms. An empathetic and rewarding alternative to building inhuman refugee camps.

With rapid changes in technology and transportation infrastructure, all habitable areas face competition for people, goods, and capital. For small towns to be competitive they need to celebrate their uniqueness, in order to be distinct and attract resources. The prevailing character, history, climate, and culture of a place, as well as the fundamental protective spirit of a place, are the key advantages to the revitalization of small towns.

The process of making towns whole again would start by meticulously analyzing and documenting existing small towns both in design terms as well as land-use policies. In most cases, policies and zoning regulations would need to be updated to legalize urbanism and prioritize walkability. Residents, merchants, and legislative governing bodies would collectively identify local treasures and places that celebrate the town’s history as well as past residents.

The initial effort should concentrate on the town’s core, perhaps one-square-mile, an area that is manageable in scale, and within which all daily needs are accessible by walking and cycling within 15 minutes. Within this area revisions to the public realm should balance space allocated to automobiles with the needs of pedestrians, cyclists, and recreational users. Infrastructure repairs would make walking and cycling safe, while related policies are instituted to reduce automobile usage and eliminate all surface off-street parking lots.

Renovation and new construction should preserve the town’s architectural character and repair the existing town fabric and streetscape, encourage walkability, build resilience, improve the quality of life for residents, and identify potential sites for businesses to relocate and serve as an economic engine for the rejuvenation process.

Small towns are essential to the welfare, health, prosperity, and sustainability of the country.