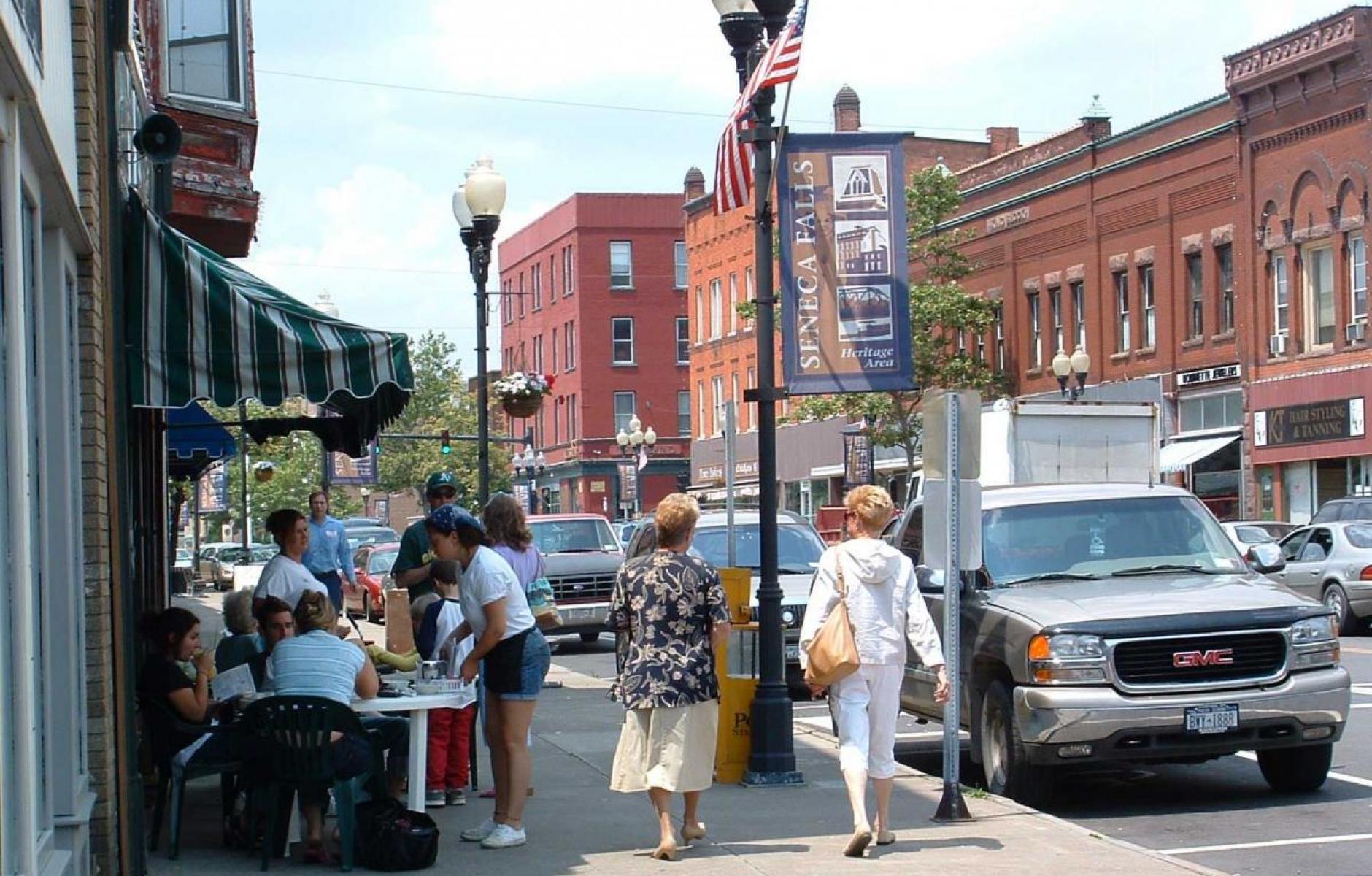 A community should determine what kind of community it wants to be, not unelected DOT engineers.
ROBERT STEUTEVILLE   &nbspJAN. 4, 2022

Before moving to Ithaca, New York, more than 20 years ago, I lived on Main Street in the town of Emmaus, Pennsylvania. Cars would go by at 40 mph, sometimes 50 mph late at night. On-street parking buffered pedestrians from the fast-moving traffic, but crossing the street was uncomfortable. Few residents used their front yards or sat on porches or stoops.

On the other side of my apartment was a freight line, where the trains came through at 3 a.m. with loud whistles. I soon learned to sleep through that, it was the constant traffic noise on Main Street that wore on me (It wasn’t the volume of traffic so much as the speed—above about 35 miles per hour automobiles get loud, and that’s related to their kinetic energy).

In the middle of the 20th Century, Main Street was designated a state route, widened, and trees were taken down so that traffic could move faster. Trees have grown up again, and the state has restriped the lanes to slow traffic a little (I checked on Google). Yet, the section of Main Street where I lived is still too wide for pedestrian comfort.

Similar damage has been done to countless American main streets, redesigned to enable fast automobile traffic at the expense of people outside of cars, who are the lifeblood of small city and town business and social activity.

Too few examples can be found where this damage has been undone in any meaningful way. One is Hamburg, New York, where US Route 62 goes through the heart of town. The state DOT has design jurisdiction over this road. About 20 years ago, this route had two 21-foot-wide lanes, one in either direction, allowing cars and 18 wheelers to speed through town. There was no on-street parking. When NYSDOT proposed adding a third lane to handle projected future congestion, the village fought back.

With the aid of new urban transportation consultants, the village came up with its own design, which narrowed the lanes to 10 feet, and included roundabouts at key intersections to slow traffic. After holding a public referendum on the plans and rallying political support, the Village got New York State to build their preferred plan—which has been widely credited with catalyzing a revitalization of Hamburg’s downtown. The expected increase in traffic never came (that outcome is common, according to Charles Marohn of Strong Towns), but the main street is thriving—with more pedestrians, bicyclists, businesses, and tax revenues.

Also in Upstate New York, the Village of Olean was able to pull off a similar redesign of State Route 16, the community’s main street (named North Union Street). This project included five roundabouts, a tree-lined central median, narrowed lanes, crosswalks, improvements to sidewalks, and angled on-street parking. Accidents, especially those with injuries, have dropped dramatically. Olean saw many new businesses open within a few years of the redesign. The city also adopted a downtown form-based code. The street redesign was funded by a US DOT TIGER grant, with local and state support.

Both of these examples involve roundabouts, which are a controversial solution among urbanists, because they keep traffic flowing at intersections. Roundabouts aren’t necessary to calm a main street, but they work in some cases. Many other design tools are available—see Lancaster Boulevard in Lancaster, California, for a good example. The roundabouts were probably implemented in Hamburg and Olean because they are a favorite tool of the NYS Department of Transportation. Use whatever tool that gets the job done, and Hamburg and Olean are successful examples of reclaiming a main street for people and social life.

Small cities and towns everywhere should be thinking about what they can do to calm traffic and reclaim street life for people outside of cars. I don’t recommend that they get rid of cars, because people still need to get to these destinations. But making the downtown pleasant for walking and biking, and hanging out, will help the community to thrive both economically and socially. In this era of climate change, we need more walkable places.

Departments of Transportation, which have jurisdiction over thousands of main streets, have strenuously resisted design changes in most cases. This has led to a mentality among community leaders to that it’s just too hard to make improvements. But this idea of reclaiming main streets for people has been around for a long time, and there is substantial empirical evidence that it works. It is time for a renewed effort to break down the opposition at state DOTs and implement more balanced mobility in the hearts of cities and towns across America. This is a project that has just barely begun and it badly needs to accelerate.

And the issue is not limited to historic main streets. A few months ago, I was part of a call with four state DOT engineers about a two-lane highway near Ithaca, where the community wants to build a new village center at a key intersection. The current speed limit is 50 mph and there is already a traffic light. Traffic volumes are fairly light, well under 10,000 cars per day in any direction. The community wants to lower the design speed for a short distance, just a quarter mile or so. This would slow down traffic, costing commuters less than a minute of time in either direction. The state engineers frowned on this idea, saying that this is a “non-standard approach,” and that the state DOT doesn’t usually take a non-standard approach.

For existing, historic main streets, the DOT allows lower speed limits, although usually still doesn’t promote good design. But the engineers simply can’t imagine creating a new main street on a state highway. This, mind you, is an area where both the town and county have designated as a node for walkable, mixed-use development. Landowners, residents, and elected officials are on board with this plan. And yet, how can a community create a walkable place with a 50 mph state highway through the middle?

Here’s a radical proposal: A community should determine what kind of community it wants to be, not unelected DOT engineers. If the local leaders want a mixed-use, walkable place, and developers want to build it, and people want to live there, the state DOT exists to support that political and economic will, not stand in the way.

In the middle of the 20th Century, DOTs decided that the interest of automobile throughput overrode those of local municipalities, who needed main streets that serve as the social and economic heart of communities. It’s time we reclaimed those main streets as main streets and allowed new main streets to be built again, as determined by local needs.