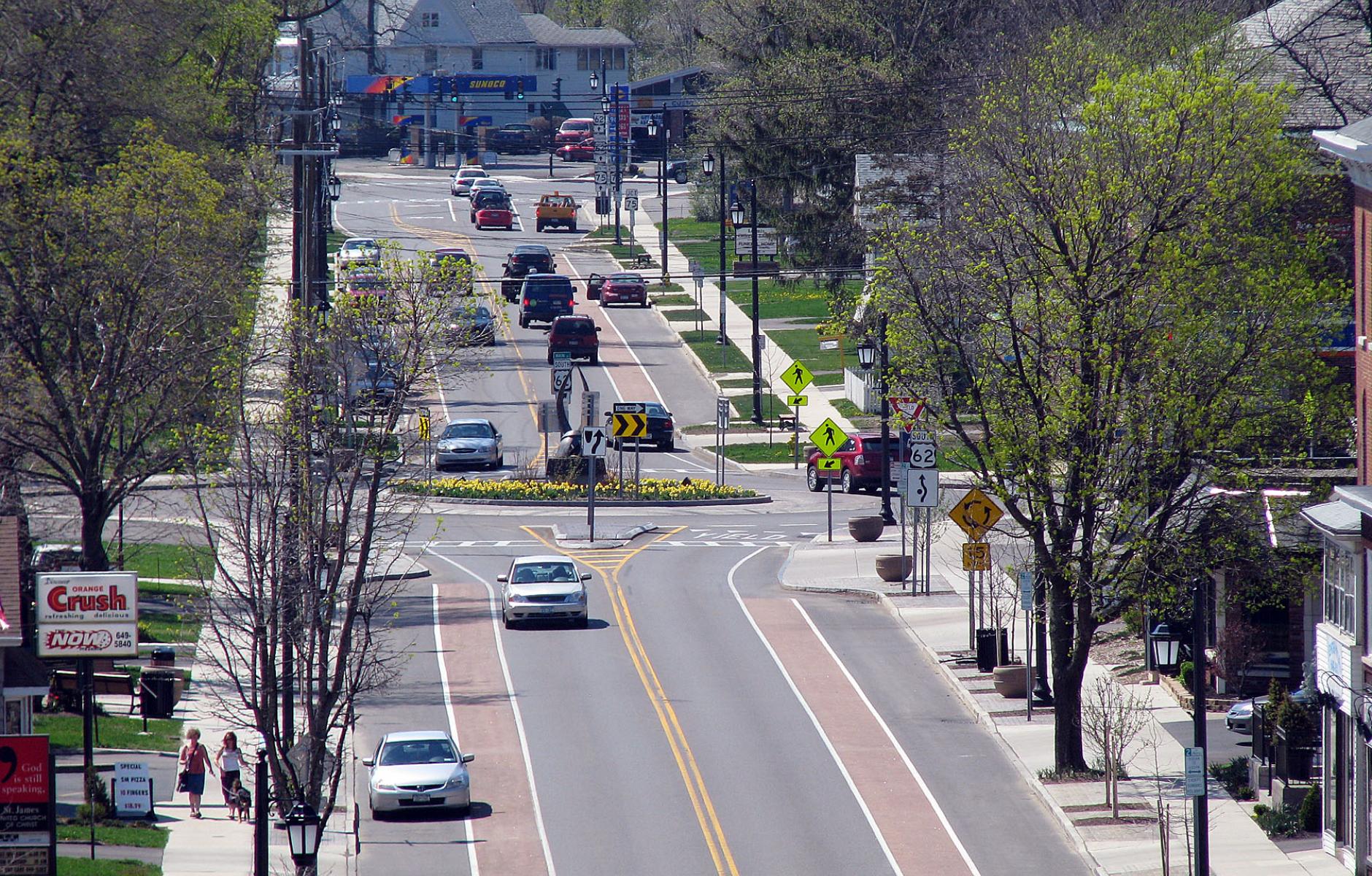 Roundabouts and reductions in lane widths helped to restore civic life along a US highway in a western New York village.
ROBERT STEUTEVILLE   &nbspJAN. 30, 2018

US Route 62, connecting Niagara Falls with El Paso, traverses a 2,200-mile cross-section of America with scores of cities and towns, including the Village of Hamburg, New York. This section of highway traverses an historic village center, carrying approximately 11,000 vehicles per day on two lanes, one in each direction. Four roundabouts, each with a prominent light fixture or sculpture, have been built here within 1.87 miles.

Colored buffer lanes narrow the travel lanes and separate the moving traffic from parked cars. Mid-block pedestrian crossings, additional on-street parking, and street trees and landscaping complete the transformation. Traffic is calmed through a combination of design changes; such as roundabouts that deflect traffic and employ terminating vistas, the narrower travels lanes that promote more careful driving, and the additional on-street parking and street trees that narrow the perceived width of the thoroughfare.

The four-foot-wide buffers are unique. “We didn’t even have a name for them when we designed them,” says Kenneth Kuminski, engineer for the NYSDOT. Painted a different color to distinguish them from the other pavement, the buffers effectively constrain the proportions of the travel lanes and the parking lanes. “They may have been the most successful aspect of the project,” Kuminski says. “They provide space for people to get out of their car, open the car door and get around.” Bicyclists sometimes use this space—even though the lanes are less wide than typical bicycle lanes. The buffer calms traffic by reducing the travel lanes to 10 feet, and allows for 7-foot parking lanes—which are narrower than usual on a principal arterial thoroughfare. The markings encourage vehicles to park close to the curb.

This stretch of US highway would be different had the village not seized control of its own transportation destiny. In the early 2000s, concerned about future congestion, NYSDOT proposed rebuilding Route 62 in the village to accommodate more traffic. The plan called for widening travel lanes from 11 feet to 12 feet and adding a third lane, a turn lane, of 11 feet. No roundabouts were proposed, but crosswalks and other intersection improvements were envisioned. Considerable on-street parking would be have been eliminated, dealing a potential blow to merchants in an already struggling village center. The plan alarmed some residents. “What are you doing with the trees and the people?” asked Lifelong resident Susan Burns, quoted by The New York Times. She said she was told by state officials, “We have to get the traffic through.”

John S. Thomas, the mayor at the time, met Florida-based walkability expert Dan Burden at a conference, and invited him to Hamburg. Burden told residents that the village wouldn’t recover until the main street is redesigned to support street life. He agreed to lead a design charrette to draw an alternative plan, which included the roundabouts and traffic calming measures. Citizens, business leaders, and officials formed the Route 62 Committee to represent the village interests to NYSDOT. The village held a referendum on the two plans, and the traffic-calming alternative won 4-1—an outcome that influenced DOT’s decision.

NYSDOT built the traffic-calming alternative, which ultimately transformed the village. By 2010, when Hamburg had been recognized for a prestigious America’s Transportation Award in the Northeast Regional Competition, DOT was proud of its accomplishment: “This project has the potential to have far-reaching and positive effects on the quality of life for village residents,” the department said.

Completed in the summer of 2009, the Route 62 project is widely credited with catalyzing the revitalization of the village—working in concert with other efforts. Concurrently with the reconstruction, New York State Office of Community Renewal provided $800,000 in matching Main Street Program grants for façade improvements—leveraging more than $7 million in private investment in 33 buildings. Aging, deteriorating facades from the 1960s and 1970s have been replaced. The village, meanwhile, tweaked its zoning laws to encourage pedestrian-friendly building frontages in the mixed-use center. Zoning changes allow zero setbacks for buildings on the corridor, encourage a second story on buildings, and require minimum percentage of windows on storefronts.

Commercial building permits in the village rose from 16 in 2005 to 96 in 2010. Property values along the corridor more than doubled in this time period, despite the simultaneous steep national recession. The Village of Hamburg had lost population from 1980 to 2010, including a 7 percent loss in the 2000s. During the first half of this decade, the village is growing again, gaining 1.8 percent through 2015, according to census estimates.

The intersections on the route were prone to serious crashes. During the two-year study period prior to the project, two fatal collisions occurred on Route 62 in the village. After the changes, a police analysis revealed that injury crashes are down by 60 percent and serious injuries fell by 90 percent on the corridor. Mid-block as well as intersection crashes have declined.

Although NYSDOT conducted no official speed tests before or after, Burden used a speed gun to observe significant traffic calming. “We were able to drop speeds from 30 mph—and higher for top-end speeds—to a more steady post treatment of 19 mph,” he says. Top-end speeds of up to 40 mph on off-peak hours—speeds most likely to create personal injury crashes—are fully eliminated, he says.

The roundabouts slow traffic, yet allow for efficient movement of freight, because the trucks no longer stop at traffic signals in the village. The thoroughfare daily carries about 500 to 600 heavy trucks a day. The corridor is also a public transit bus route and handles many school buses—four village public schools are sited within a block or two of the highway.

Since the thoroughfare reconstruction, The New York Times reports a “burst of civic activity” in Hamburg—with the initiation of a regular farmer’s market, movie-in-the-park night, a garden walk, a street music festival, a progressive dinner called Hamburg Bites and other events.

Long-term growth in congestion and delays in the village were a major concern of DOT officials prior to the project. Delay, congestion, and level of service have not been measured since completion, DOT reports. Based on anecdotal evidence, delay and congestion have gone down. “It’s more expedient to drive with the roundabouts,” says Laura Hackathorn, a Village Trustee. “We used to have to sit at lights all the time—even in off-peak hours.”

Hackathorn runs a women’s clothing store at the heart of the village, at the junction of Route 62 and State Route 391. Her shop looks out on one of the roundabouts. “Our entire village is transformed,” she says. “Not a day goes by in my store I don’t hear about how everyone loves our village. This project fulfilled every expectation and then some.”

The state did not anticipate the positive economic and social impact of the traffic calming/roundabout alternative. Since the new design was completed, non-automotive traffic and street life have flourished by all accounts. Nor did the state predict that the widening alternative would damage economic and social life—but that belief drove village support for the alternative. The Hamburg project can be used as a prime case study example by traffic engineers and others to cover transportation, social and economic impacts of thoroughfare design.

Between 2002 and 2009—when the two plans were debated, the village pushed for and DOT agreed to the alternative, and the project was put out to bid and built—there was skepticism about the roundabouts, even among residents. A 2006 cartoon appeared in the Hamburg Sun that showed a fortune teller with a crystal ball consulting with a resident and saying: “I see you traveling a great distance on a useless and thankless journey because you won’t be able to find your way out of the new roundabouts.” At the time, the public often confused modern roundabouts with larger, higher-speed traffic circles, which can be scary for motorists and pedestrians.

Some concerns remain. The mid-block crossings, some of which are only identified with paint, should be better marked, says Hackathorn. The village requested that DOT provide substantial new landscaping with the reconstruction, and DOT said that it would not be responsible for maintenance. A high level of commitment on the part of citizens to the new town center has solved the issue so far. Village volunteers maintain flowers, shrubs, and do the weeding.

Hamburg continues to win awards and the consensus is that the new design works well. Seven years after the project completion, NYSDOT recently repainted the safety lanes. The revitalized town center is a source of renewed community pride—as confirmed by public surveys. The key lesson, says Hackathorn: “If you build a place for cars, it will be a gathering place for cars. If it’s built for people, it will be a gathering place for people.” Kuminski is more succinct: “Bigger is not better,” he told the Times.