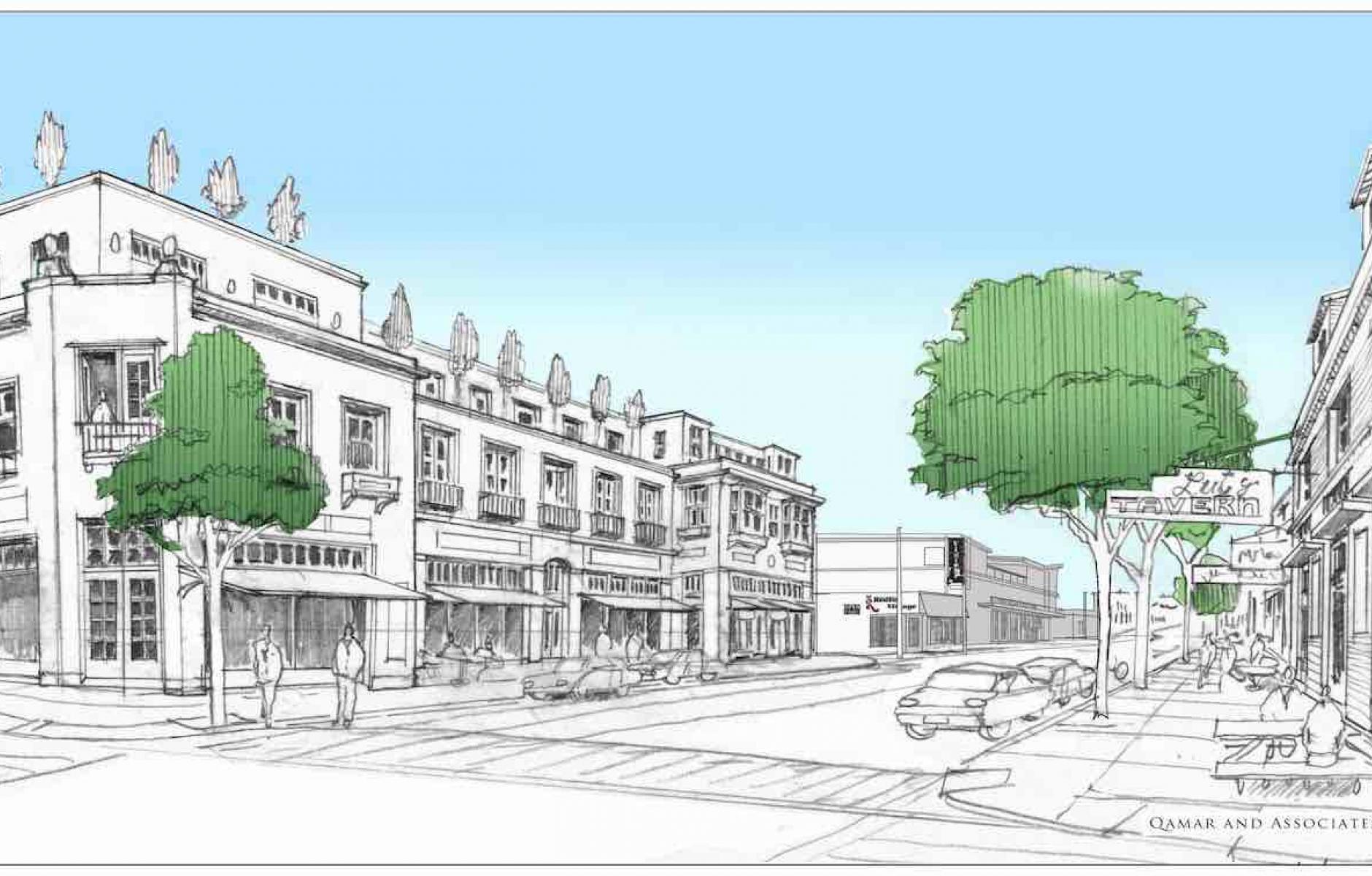 A drawing by Laurence Qamar showing a concept for step-backs developed with the Woodstock neighborhood in Portland, allowing developers to proceed with design types that have already been vetted by the community.
Development

We need a major rethink of gentrification and affordability challenges if we’re going to get anywhere. “Quality In My Back Yard” may offer a path.
MICHAEL MEHAFFY   &nbspJUL. 13, 2021

Note: Public Square editor Robert Steuteville is on leave from late September through the last week of October, 2022. In the meantime, we are offering some popular articles from 2022 in addition to new content.

The urban scholar Jane Jacobs was famous for pointing out that if we don’t understand “the kind of problem a city is,” urban planning cannot possibly progress on the big challenges of the day. “Of course it stagnates,” she said. “It lacks the first requisite for a body of practical and progressing thought: recognition of the kind of problem at issue. Lacking this,” she said in her characteristically acerbic style, “it has found the shortest distance to a dead end.”

Seeing the growing challenges within so many of today’s urban landscapes—especially the pervasive and intractable problems of unaffordability, gentrification, displacement and homelessness—Jacobs’ harsh words still ring true, even after sixty years.

Jacobs was famous for pointing out that most city problems are not made up of variables that can be managed in isolation. Instead, they are systems of interactive elements, a phenomenon she termed “organized complexity.” When we treat them as simple variables in isolation, we are likely to fail.

Yet today the simplistic solutions keep coming. One of the most superficially appealing is the idea that, to address affordability, all we really need to do is add more housing units (perhaps with the help of tall buildings). And furthermore, a key to doing that is to shove infill down the throats of obstinate NIMBYs.

To be sure, more supply is needed to meet demand, as one of the factors in the larger problem. But homes are not separate widgets cranked out by a factory, the more the cheaper. Every home exists in a location, on a piece of land, and the price of that land is a major component of housing cost. That’s one of the factors we have to manage, as part of an interactive system. Just adding units can have unintended or even perverse consequences, and even contribute to higher surrounding prices (if, for example, it contributes to making the location more desirable, as happened in Vancouver, BC).

The trouble with such a “build, baby build” approach is that it attempts to solve for a two-variable problem—number of housing units and price of housing—and as Jacobs observed, the city is not that kind of problem. The number of housing units is one factor in price, but others include the elastic price of land, the influence of global capital flows, the often chaotic regulatory and entitlement processes, mortgage interest rates, and many other factors too, all interacting in a complex way to shape home prices.

Furthermore, in an era already characterized by toxic divisiveness, the NIMBY debates are surely some of the most divisive—and likely counter-productive besides. Yes, NIMBYs (and we all) do need to be more proactive in helping to find solutions to these and other very real urban issues. And yes, we need reforms of dysfunctional public involvement processes. (Having been part of many, I am well aware of their flaws.)

Nor do we help ourselves to address the structural dynamics by attributing simplistic and malevolent motives to the actors, like racism or xenophobia. Those may well be part of the NIMBY mix at times, but there are usually many other motives besides. Project opponents themselves will often seize on more obvious issues, like traffic, parking and safety. Often, they will complain about “too much density.”

But these are only the identifiable proxies of a larger and less articulated fear—that to some disturbing degree, the livable quality of their neighborhood will go down. They may not be wrong. And to add insult to injury, the problem of affordability will not likely improve much if at all, and may even grow worse.

When it comes to preserving livability, density is not really the issue, as many of us know. Some high-density areas are delightfully livable, and some low-density areas are miserable. The deeper question is the quality of the development, and whether it elegantly handles impacts like vehicles, shading, safety issues, noise, and just plain ugliness.

The “B” word—beauty—is less often raised in the public debates. Partly that’s because there is a general attitude that beauty is subjective, and anyone who makes a claim about the aesthetics of a project is merely expressing a random individual preference with no collective weight. But recent findings from neuroscience, environmental psychology and other fields is pointing out that people share aesthetic evaluations to a remarkable degree. When it comes to human environments, evidence shows that most people have a shareable “intersubjective” experience of the beauty and livable appeal of these places.  So, it’s worth taking the aesthetic evaluations of existing residents seriously.

And yet, too often experts malign the aesthetic evaluations of “laypeople.” Research in this area does show a remarkable divergence between architects and planners on the one hand, and most citizens on the other. When citizens don’t like the aesthetic qualities of proposals, the dismissive response of professionals is too often to claim superior professional expertise in judgment. One problem is, of course, that the professionals aren’t the ones who will have to live there. Furthermore, if “beauty is in the eye of the beholder,” then how can professionals claim any special expertise? The experts are trying to have it both ways—and then the citizens often feel marginalized, disillusioned, and increasingly angry. It’s an unhealthy cycle.

The deeper problem here is not the players, it’s the game. We have a dysfunctional public involvement process, one one that seems very good at delivering the worst of both worlds: slower and more expensive projects, that still manage to leave citizens unhappy.  Only those who are expert in gaming such an irrational system—and who may not care too much about project quality along the way – are likely to come out well. Meanwhile, the urban challenges of unaffordability, displacement and homelessness do not improve.

In response, some promising new alternatives have been proposed. One is the use of “pattern zones” by Matthew Hoffman and colleagues, in a CNU Charter Award-winning project. As described by Rob Steuteville in a Public Square article last year, “Buildings included in a pattern zone are designed to match the city’s unique architecture and feel familiar after they are completed. Because the architectural designs are pre-approved, the public now knows exactly what they can expect from infill development in the neighborhood.”

This approach also streamlines the entitlement and regulatory process, Steuteville notes: “The pattern zone reduces the administrative burden for the city, and cuts the design and entitlement costs for applicants. A small developer can get architecturally approved plans for a good-looking building immediately.”

A similar approach was proposed by Laurence Qamar, Heather Flint Chatto and colleagues for infill development in Portland, Oregon. Instead of the usual approach of professional boilerplate regulations, they offered precedent designs and visual guidelines that are developed with the community beforehand—in one case, in a community charrette in Portland’s Woodstock neighborhood. The precedent designs can be pre-approved by the neighborhood association, and can even be pre-planned and pre-entitled by the City. A developer can take them more or less off the shelf, or use them to develop very similar plans, essentially moving forward with a project that the neighborhood has already conceptually reviewed and approved.

Of course, since this is a multi-variable urban problem, more needs to happen too. We need to reform the antiquated parts of the development system with more rationalized and standardized models—an approach I have referred to as “plug and play urbanism.” We need economic tools to address soaring land prices, like taxation tools, fees and other incentives and disincentives. We need to apply these tools to unlock many more sites, including corridors with wasteful landscape setbacks, under-utilized parking lots, dying malls, and similar “opportunity sites.” These need to be planned as part of a regional polycentric network of centers and corridors offering “complete neighborhoods,” meeting demand with supply and contributing to easing upward pressure on home prices. Not everyone needs to live in the city core, or can—but everyone needs a decent home in a livable, well-connected neighborhood, offering access to urban opportunities and resources. (A number of these systemic innovations were covered in a “centers and corridors report” developed for Portland’s regional planning agency, Metro.)

This kind of approach proposes a fundamental shift in the role of citizens, from reactive NIMBYs to proactive collaborators in pre-approving and streamlining better quality development. Instead of NIMBY opponents, or (less likely) YIMBY boosters of projects sight unseen, they become “QUIMBYs” – committed to co-creating “Quality In My Back Yard.” This playful name, originated in Portland, is also a nod to one of that city’s historic figures, memorialized in a prominent street name there—as well as the literary figure of Ramona Quimby (in Beverly Cleary’s books) and the cartoon character Mayor Quimby (in former Portlander Matt Groening’s The Simpsons).

More importantly, this approach supposes that citizens in a democracy can in fact be put to work to become part of the solution, instead of part of the problem. Just imagine.