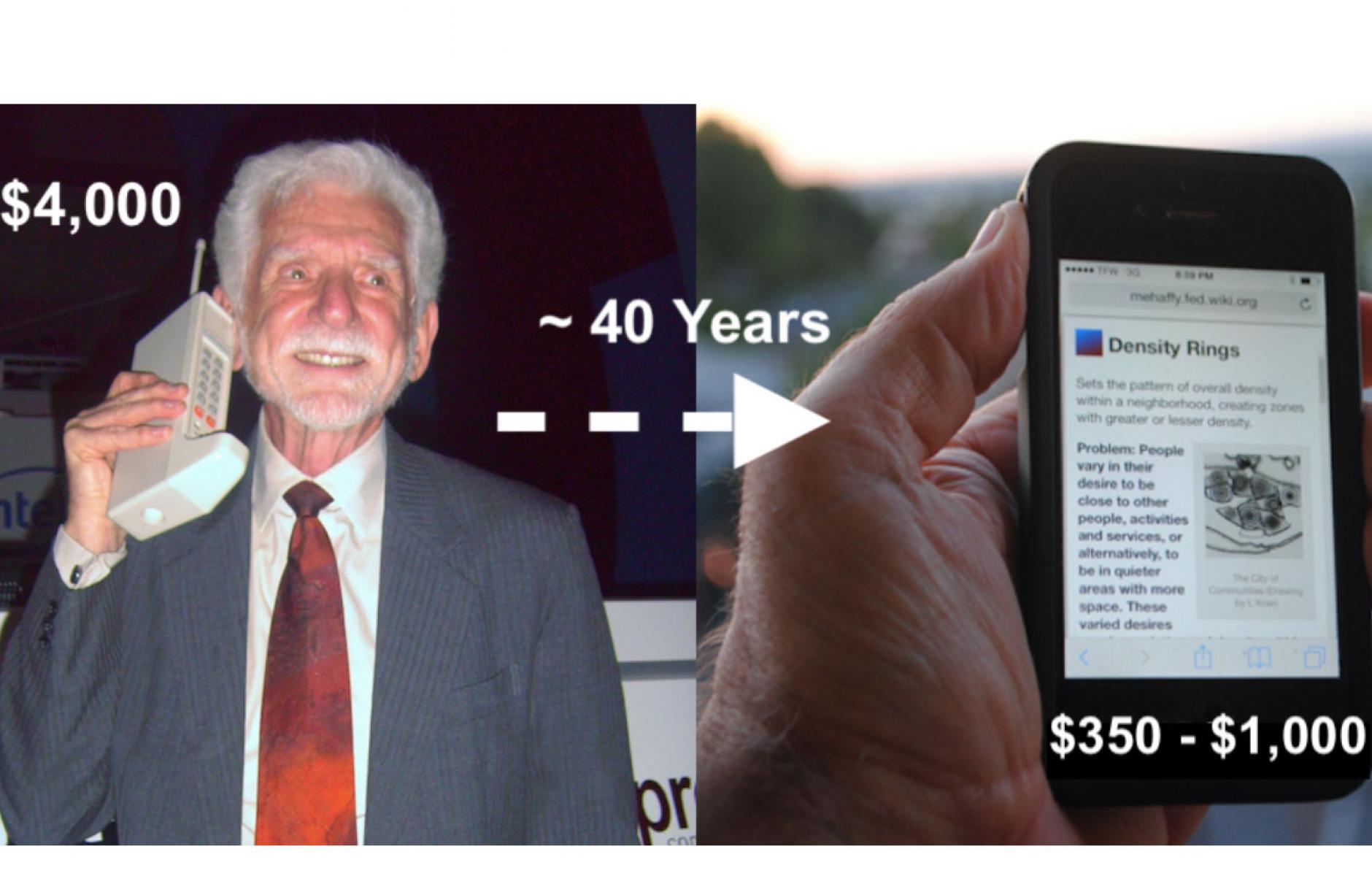 Left, Martin Cooper, inventor of the DynaTAC 8000, shows one in 2007. (Photo by Rico Shen via Wikimedia Commons.) Right, an iPhone today, showing a new wiki-based pattern language system invented by the author and associates.
Development

Why we need ‘plug and play urbanism’

Imagine that it’s 1983, and you are in the very young business of cellular telephones. The only unit available is the massive Motorola DynaTAC 8000x, a brick-like object that costs $4,000, takes ten hours to charge, and provides just 30 minutes of talk time—IF you happen to be in the very few areas that have cell coverage.

How do you get from there to where we are today? How do you overcome the many formidable barriers to cost and availability, and get the economies of scale and standardization that you will need to become competitive with (and eventually overtake) land lines? You will need innovation, regulatory changes, and a willingness to standardize many elements (like computer chips) while customizing others (like design features). In time, the reductions in cost and availability will pay off, to the point that in 2020, 94 percent of Americans will have a cell phone, and whole continents (like Africa) will rely on them almost exclusively instead of the old land lines.

We could say that New Urbanism today still faces the challenges of 1980s cell phones. It’s a small, expensive niche—perhaps a few percent of all settlements—and often not competitive against garden-variety sprawl. Why is this still the case? What can we do about it?

First, consider almost any example of a sprawling suburban neighborhood. All of the elements are plug-and-play modules that can be dropped in almost anywhere. The big box, the fast food pad, the garden apartment, the housing six-pack—they can work anywhere, in Iowa or Florida or California or Maine. (Or, increasingly, globally too.) Their cookie-cutter aesthetics is standardized too, often making their design approvals standard and rapid.

But that’s only the beginning of the story. Also standardized are their technical specifications, regulatory approvals, financing structures, and design systems from building to operations, allowing great economies of standardization and scale. McDonalds—love them or hate them—created a marvel of standardized, low-cost production, not only in their food products but in their buildings, and their kit-of-parts franchise system.

We might conclude that these economies of scale and standardization are just destructive forces that we must reject. In their extremes, they certainly are destructive, and unsustainable. But there are two problems with the idea of rejecting them wholesale. First, at this point in history at least, these economies are what makes the world go around, and any hope of changing things has to recognize the necessity to compete with them.

The real problem, as my colleague Nikos Salingaros and I have written about, is that in a healthy system, these economies need to be counter-balanced with economies of place and differentiation. In natural systems, economies of place (ecological structures) and differentiation (biodiversity) matter enormously. Too much of the wrong thing in the wrong place and you have a toxic condition. Too much of the same thing, and you have a monoculture, a system that is vulnerable to catastrophe.

In urban systems too, it matters, say, whether our homes are near our workplaces (an economy of place), and whether our homes fit our own local family needs (an economy of differentiation). Too much of the wrong land use in the wrong place (functional segregation) and you get sprawl. Too much of one kind of structure and you are poised for disaster—like the 2008 housing mortgage collapse.

In a sense, we could say that today we have a kind of “operating system for growth.” Some kinds of urban patterns will “plug and play” on this system, while others will not—just as we can’t run Mac software on a PC, say. This settlement “operating system” consists of all the elements that produce the urban forms around us: the laws, codes, standards, models, incentives and disincentives, and other institutional structures, formal and tacit, that shape our built environment.

The problem is that this model relies too much upon economies of scale and standardization: the “cookie-cutter” syndrome of every chain restaurant and every tract house looking the same, and creating the same maladaptive, toxic condition. But it is not just individual products that are the problem, but the entire system, with its inability to adapt to place and to generate diversity.

As we can begin to see, there are ways that we might get the best of both worlds, as natural systems do. Perhaps, for example, we might create standardized models of entitlement and finance, for fairly standardized “plug and play” building and place types. But then the local expression of these buildings might be created through unique façade changes that are a small fraction of the full building cost, and a minor aspect of the permitting requirements. Local residents might also work together with city agencies to create libraries of pre-approved design types, expressive of their local place and its diversity. This “win-win” approach to entitlement could overcome many of the formidable barriers to lowering cost and avoiding the divisive “NIMBY” battles, replacing them with something more like “QUIMBY” – Quality In My Back Yard. (A panel convened by Portland’s Metro planning authority made a similar recommendation in 2009.)

One of the most important aspects of the “operating system for growth” is the way the flow of money works, often in hidden ways that are financially a bad deal for the public sector—that is, the taxpayers. As Joe Minicozzi and others have written, when the long-term return on investment for municipalities is assessed, sprawl infrastructure looks a lot less attractive financially than investments in compact walkable infrastructure. Too many developments extract quick profits at the expense of long-term benefits—what economists call “externality costs.” Charles Marohn has gone so far as to call this arrangement a “Ponzi scheme”—one that will catch up with us if we don’t reform its hidden financial transfers.

But to change the equation, innovative new financial tools will be needed. Some of these will involve tax policy changes, like new policies for land taxation. (There is a fascinating debate about so-called “Georgist” tax policy, for example.) There are other ways of directing funds to level the playing field, including grant programs for pilot projects, “feebates,” credits to system development charges, and other forms of “monetizing externalities” by the public sector.

But beyond public financial tools, we will need private tools too, including new investment instruments—for example, the “time tranche bonds” proposed by Christopher Leinberger. As Leinberger also points out, New Urbanists need to be able to package up real estate projects into simple investment vehicles, as alternatives to the highly standardized 19 types that exist in conventional suburban development.

There is a telling but overlooked line in Jane Jacobs’ classic The Death and Life of Great American Cities, talking about the importance of feedback mechanisms, especially financial ones, and the need for their reform. “In creating city success,” she said, “we human beings have created marvels, but we left out feedback. What can we do with cities to make up for this omission?”

The answer is that we can patiently re-wire the “operating system for growth” to restore these healthy feedback systems. We can concede that the built environment changes slowly, and the systems that generate it change even more slowly—unfortunately much more slowly than software and cell phones. But they do change, as they did in the 20th Century—and now they must change again, in the 21st Century.