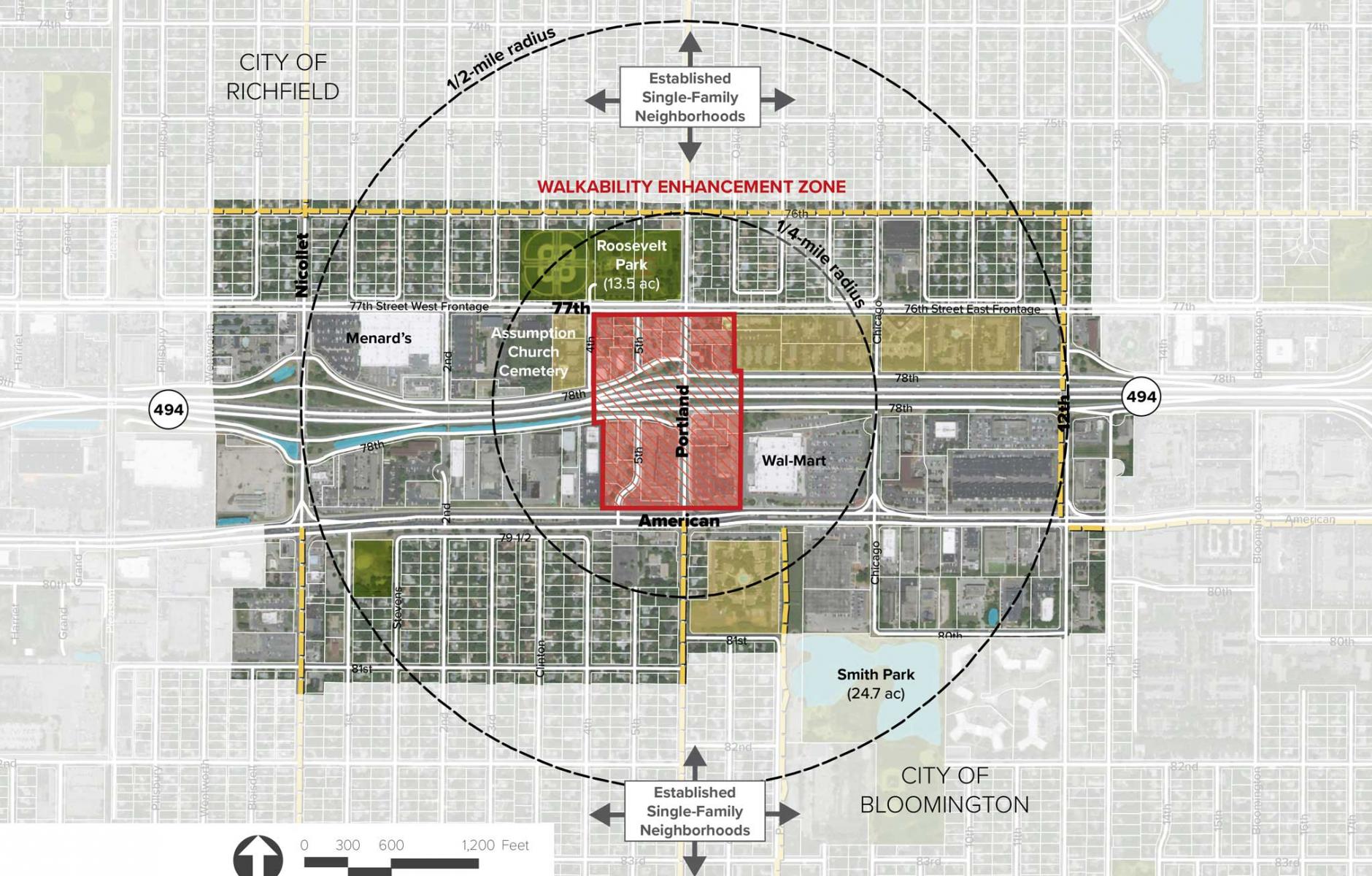 Vision for livability along an Interstate

I-494 forms the border between two Minnesota suburbs. A CNU Legacy team created a plan to improve life for economically disadvantaged residents of the area.
ROBERT STEUTEVILLE   &nbspJUL. 12, 2021

Bloomington and Richfield, Minnesota, are two cities in the Minneapolis/St. Paul region divided by a common highway—Interstate 494. Although both cities include street grids, that network is broken at I-494, which forms the municipal border (Richfield to the north and Bloomington to the south). Streets connect at about every half mile across the highway.

A CNU Legacy Project called Portland Gateway (named for Portland Avenue, one of the connecting thoroughfares) created a vision for the border area, focusing on how it could be made more livable and walkable. The project is timely because of new highway and transit infrastructure that is planned. Minnesota Department of Transportation (MnDOT) proposes changes to Interstate connections at three streets, which will have an impact on walkability and development in the area. MetroTransit, which serves the Twin Cities region, has proposed a Bus Rapid Transit (BRT) line through the area with two transit stops around Portland Avenue, potentially enabling transit-oriented development (TOD).

Legacy Projects take place in advance of CNU’s annual Congress. This one was scheduled for last year’s CNU 28 in the Twin Cities. Covid made CNU 28 virtual, and the Twin Cities Legacy Projects were delayed. The Portland Gateway is the first to be completed with the publishing of a report.

The project team was led by TSW of Atlanta, Georgia, working with partners Richfield, Bloomington, MetroTransit, MnDOT, and Hennepin County. A virtual charrette with online activities was held for four weeks in March 2021.

The team originally planned to focus solely on a 30-acre site immediately around Portland Avenue. The critical impact of the highway infrastructure on the future of the border area led the team to examine a larger “Walkability Enhancement Zone” of a little over a mile in length, covering about 360 acres. Most of the area was developed in the 1950s and 1960s, consisting largely of aging commercial buildings, strip centers, and affordable apartment complexes. The population is highly diverse and more economically disadvantaged than other parts of Richfield and Bloomington.

“The Portland Gateway is comprised of aging commercial centers that could be re-imagined as mixed-use developments,” the team reports. “Existing businesses could be integrated in these new developments. However, the I-494 interchange re-design and construction could affect the feasibility of redeveloping these sites.”

MnDOT proposes to consolidate on and off ramps at three intersections into a “tight diamond” interchange at Portland Avenue. This could open up development opportunities at Nicollet Avenue to the west and 12th Avenue to the east, yet put all of the Interstate-related traffic at Portland Avenue, which is also the thoroughfare that is proposed to get BRT. Mixing transit with an Interstate interchange is a problem for walkability and transit-oriented development.

The Legacy team proposed an alternative design called the “Texas Split Diamond,” shifting the off-ramps to dead-end streets on both sides of the highway that carry little traffic. Although this design would have resolved the conflict between the interchange and BRT, MnDOT declined to study the idea and is moving forward with its plans to place all of the ramps at Portland Avenue.

The Portland Avenue Gateway, the original 30-acre study area, will likely never become a walkable urban center with the highway interchange at its heart. So, the team created design standards and action items that could be applied to the larger Walkability Enhancement Zone to boost economic development, business viability, equity, and the public realm along the municipal border.

The team established goals and principles for transforming the study area, determined critical action items that officials should consider to improve the economy and social conditions, and a drew up a set of design guidelines. The latter are focused on placemaking and walkability, concepts that are foreign to the physical environment today.

Improving the public realm is a key issue, according to the project team.

The top six action priorities are all intermediate range projects:

The changes to the border area between Richfield and Bloomington will be significant in coming decades due to the proposed infrastructure investments. The population is economically disadvantaged, and the area has significant affordable housing. It also suffers from a degraded public realm that favors automobile travel.

The Portland Gateway Legacy Project focused on how to make a better future for current and coming residents of the area. As the border area continues to develop, the team discovered significant opportunities to improve the lives of a historically disadvantaged population. The cities and public agencies should follow through on these ideas—especially the action items like zoning reform and design guidelines.

Although the Portland Avenue interchange is moving forward, it still has to go through environmental assessment and review. If the public has second thoughts about the location of the new interchange, the legacy report includes a detailed alternative proposal that could promote transit-oriented development in the area.