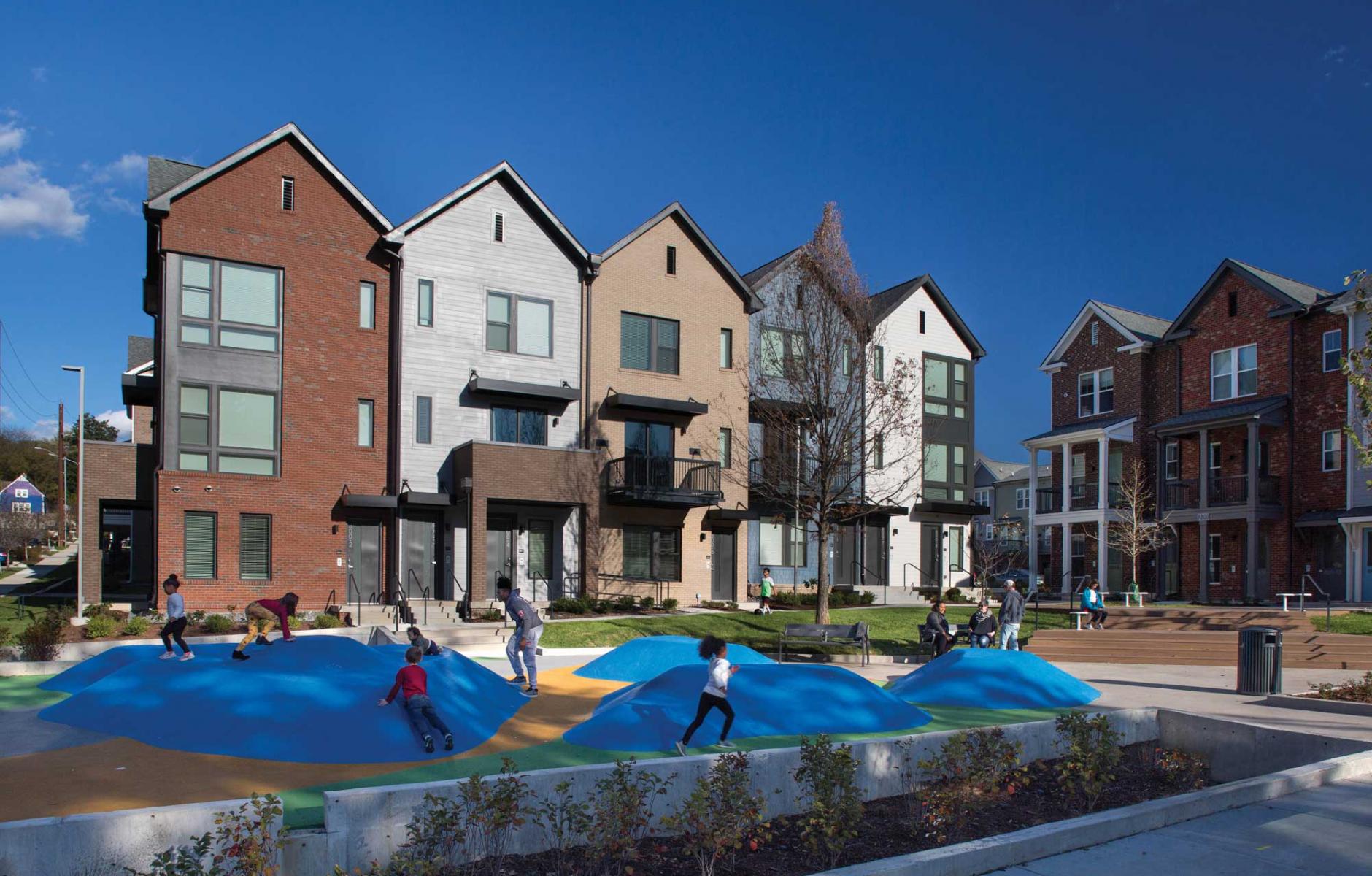 As a key community activator, the new corner play area is an anchor of communal activity within the project. Courtesy of Smith Gee Studio
Design

A new model for public housing in Music City

The 4-acre Kirkpatrick Park sets a standard for how to build mixed-income public housing in Nashville—an example that could be emulated elsewhere in the US. The development mixes public, workforce, and market-rate housing in nearly equal measure, side-by-side in close proximity. Instead of the visual redundancy that most public housing sites are known for, Kirkpatrick Park includes fifteen distinct 2- to 3-story residential buildings in varieties of townhouses, stacked flats, and townhouses over flats.

“Kirkpatrick Park skillfully sets the stage to reknit the community with an interconnected street design and a mixed-income mixture of missing middle housing,” says Rick Bernhardt, former Metro Nashville planning director. “It is a strategic design that reunites a walkable neighborhood and provides a model for other areas torn apart by previous urban renewal and public housing policies.”

The site is a former underutilized park—so that no Cayce Homes residents were displaced. All units are built to the same market-rate standards, inside and out, and designed to meet LEED for Homes (Silver) protocols. “My new home is more beautiful than I could have ever imagined. I am just overjoyed,” says Geraldine Watkins, a former Cayce resident.

The two-block development is built around a central “woonerf,” a unique addition to public housing. This pedestrian-oriented street offers safe play and gathering space overlooked by front porches, stoops, and balconies. This woonerf gives Kirkpatrick Park a unique identity. Although cars may navigate and park on the street, they travel very slowly and the space clearly is designed for people on foot and bicycle.

Two pocket parks also flank the Kirkpatrick Park site. One, at roughly 7,000 square feet, is composed of rubberized mound play surfaces creating a safe environment for children to have creative play (see photo at top). The other is roughly 2,500 square feet of bioretention transformed into a usable gathering area. Each park offers seating and communal intersections to tie into the existing and future neighborhood. The bioretention is part of an ambitious sustainable site development program, including reduced stormwater generation due to infiltration infrastructure.

To enable Kirkpatrick Park to kick-off the ambitious Cayce Homes redevelopment without displacement, MDHA created a Redevelopment District and design guidelines, rezoned 83 acres, purchased a 12.6-acre adjacent Section 8 housing complex, and closed a city park. The development is named after the closed park. The closure is temporary, as the public space will be recreated elsewhere in the larger redevelopment. The project’s new, smaller, public spaces are now better utilized than the namesake park.

Kirkpatrick Park is located about a mile, across the Cumberland River, from downtown Nashville. Situated near one of the major gateways into East Nashville, a gentrifying urban neighborhood filled with high-priced single-family homes with high rates of owner-occupancy, Kirkpatrick Park needed an especially robust public process and consensus amongst the various stakeholders. Input was sought through a comprehensive community needs survey as well as dozens of public and resident-only meetings.

The development achieves a fairly high density in a way that feels like a Nashville neighborhood and is compatible with surrounding streets and blocks. It has helped to bring walkability, and a high-quality public realm to a part of the city that that is lacking in these qualities.