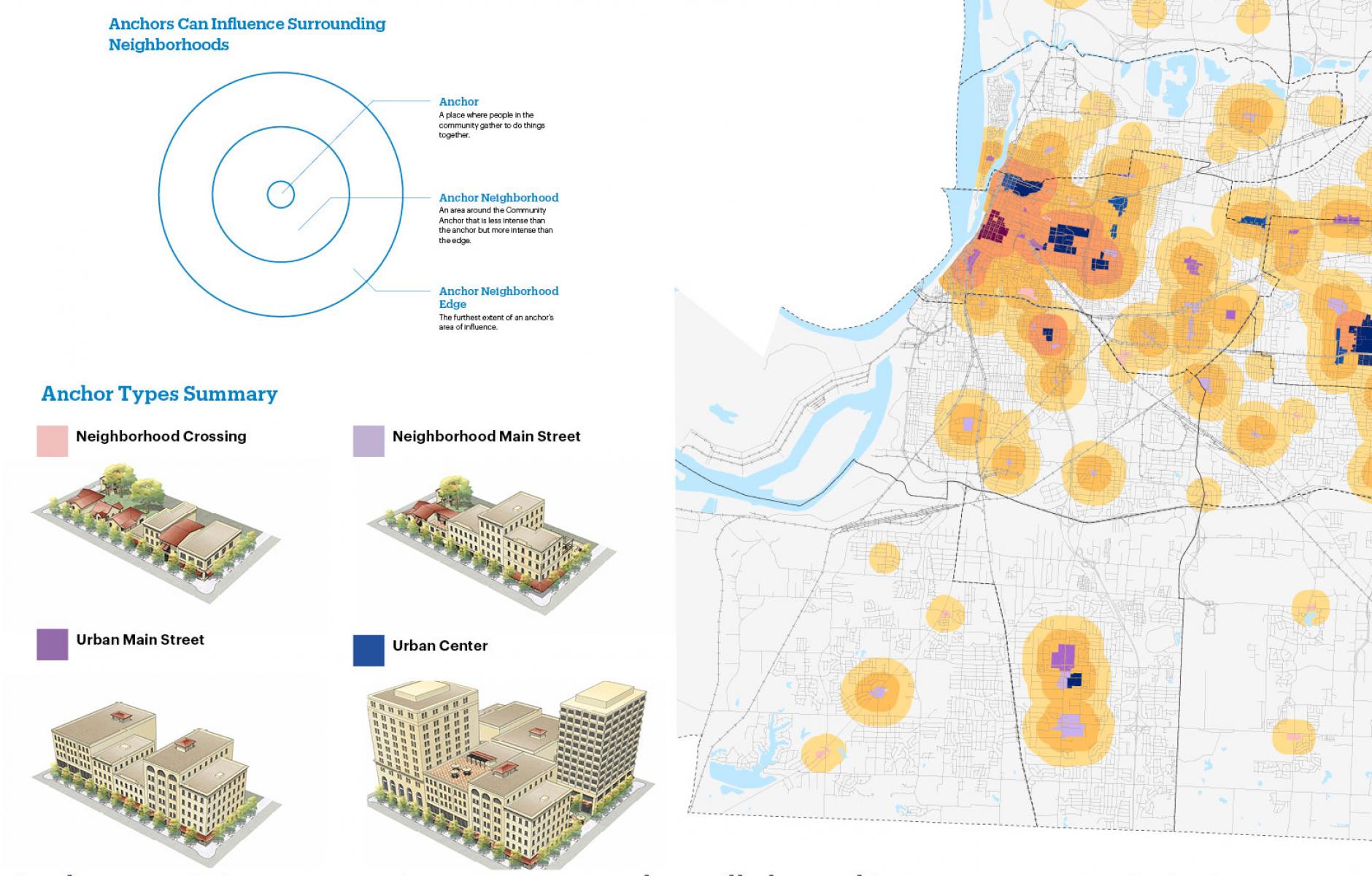 A strategy to focus on anchors of community in Memphis. Source: Memphis 3.0
Design

Growing up, not out

Until Memphis 3.0 was adopted in 2019, the city had not updated its comprehensive plan for nearly 40 years. As a result, Memphis’s outdated growth model combined geographic expansion with disinvestment in many existing neighborhoods—particularly those with majority African-American population.

After more than 400 public meetings and events, and involvement of 15,000 residents in a process that lasted more than two years, the City changed course. The soul of the Memphis 3.0 Comprehensive Plan is to “build up, not out.” The plan guides land use policy, goals, and actions to focus growth and investments in the core city and neighborhood centers to create more dense, mixed-use, mixed-income, walkable, transit-served communities in a wide range of neighborhoods.

“The economic renaissance we see in Memphis isn’t being felt in every neighborhood,” notes mayor Jim Strickland. “This plan is a roadmap for growth and investments in all neighborhoods throughout the city.”

Community “anchors” (pedestrian-oriented places) are defined in terms of character and three degrees of change over time: accelerate, for areas that can absorb growth more rapidly; sustain, for areas that have reached maturity in character; and nurture, for broad areas that have experienced disinvestment and need investment stabilization, support of community assets, and affordable housing. The term “anchors” came from conversations with elder Memphis residents who recalled thriving main streets that anchored city life.

First, the plan coordinates a vision across city divisions that impact development and the public realm, such as streets, transit, and sewerage. In 2019, the first year of adoption, 71 percent of development investment was spent on anchors and anchor development identified in the comprehensive plan.

Second, the plan clearly defines legislative direction for zoning and development review decisions to be made consistent with the plan.

Third, the plan has led the City to make an historic investment in communities through the Accelerate Memphis Initiative. This initiative invests $200 million in the neighborhoods in the form of public infrastructure, affordable housing, parks and greenways, and reinvigoration of diminished public assets following the recommendations of the comprehensive plan.

Follow-up plans for neighborhoods and new master plans are underway for services, parks, and streets; the city government created two new funds to support affordable housing and community-based investment; and tax-increment financing districts are being set up.

“Remaining solvent into the next generation is a challenge for many American cities that have grown too large in land area relative to population,” notes Alli Thurmond Quinlan, a juror and principal of Flintlock Architecture & Landscape. “Memphis is showing bravery and honesty in making hard choices now in their comprehensive plan.”

An extensive study of housing supply and demand conducted as part of the plan demonstrated an imbalance between the need for smaller units versus the large-lot single-unit homes that constitute the majority of existing housing supply. New place-based land-use categories encourage Missing Middle Housing types to create more compact, walkable neighborhoods—while supplying the type of housing options that are most needed.

Memphis 3.0 is a clear departure from the former growth policy that resulted in suburban sprawl and urban disinvestment. The new land use plan and a companion economic development plan provides a place-based strategy to reorient investment towards existing main streets, neighborhoods, and urban districts. Memphis 3.0 focuses growth around its anchors and recognizes how they change to accommodate new population and become more walkable, transit-served, complete communities.