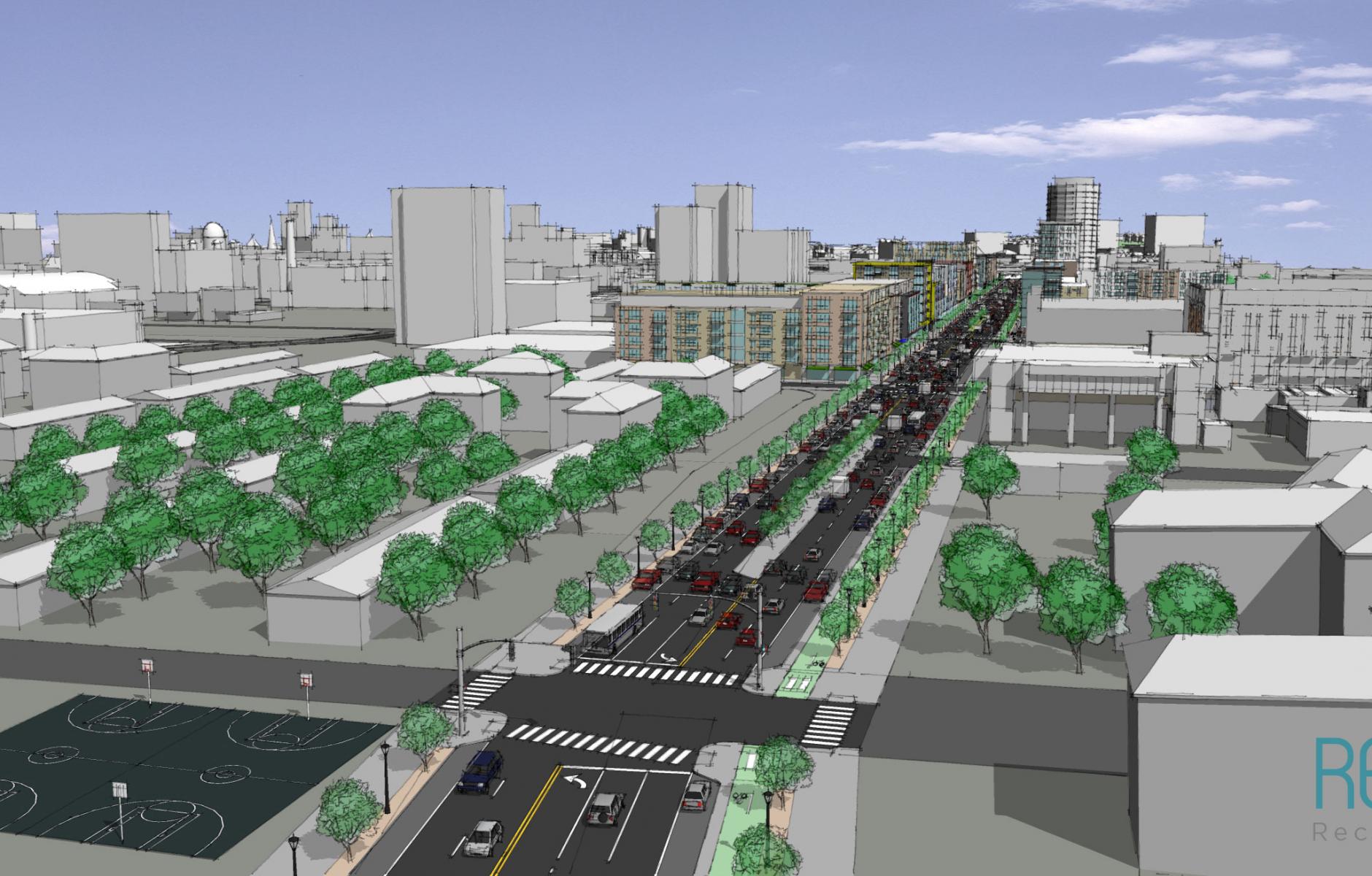 Vision of Almond Avenue without the I-81 Viaduct. Source: Rethink 81
Freeway transformation

Syracuse, on White House radar, should oppose highway designation for I-81 teardown

The replacement for Interstate 81 in the heart of Syracuse should be designed and built on the scale of a city street, giving the city an economic shot in the arm.
ROBERT STEUTEVILLE   &nbspAPR. 7, 2021

An Interstate 81 that no longer goes through the heart of Syracuse, New York—instead bypassing the city on the current I-481—could be a game-changer that benefits the entire region. Accompanied by good roadway design, facilitated by key political choices, that move has the potential to make the city’s downtown stronger and spur mixed-use development that is socio-economically equitable.

Implementation could begin as soon as 2022. Last week Public Square presented a vision for Syracuse after the elevated I-81 Viaduct is demolished. Today’s article examines how a vision along those lines could be built if local officials act decisively. At a time when in-city highway transformation is taking off nationwide, with likely support from the federal government, Syracuse could lead the way in demonstrating the benefits of converting a highway to city streets. The city is on the radar of the new administration. Last week the White House mentioned I-81 in Syracuse in its $20 billion proposal to reconnect neighborhoods severed by 20th Century highways. I-81 in Syracuse has been on all six previous CNU Freeways Without Futures lists going back to 2008, and CNU will release a new list this spring.

NYS DOT currently favors a “Community Grid” option for I-81, a highway that was built starting in the late 1950s and has done multigenerational damage to Syracuse—dividing the city and creating a swath of underutilized, vacant land. The “Community Grid” theoretically means re-establishing urban scale streets in place of the Interstate, which would be rerouted to I-481. Assuming that plan goes forward, a key issue is the design and scale of the replacement thoroughfare. The Interstate section that would be bypassed is about 10 miles long—seven miles of which are north of I-690. That northern section, which services the airport, the huge Destiny Mall, and other destinations, would remain of similar design—a limited access highway.

The three-mile section south of I-690, especially the 1.4 miles going past downtown and adjacent neighborhoods, is most critical to be scaled-down to a city street. Instead of taking less than 2 minutes (currently) to drive that short section, the driving time may be 5 minutes. That’s not a big increase, but it is important for the trip to take a little longer for two reasons.

One, it will encourage I-81 through traffic to use the bypass route. Two, it will slow down traffic on Almond Avenue, the replacement thoroughfare. Slowing traffic, particularly trucks, will save lives and injuries, and also is key to economic development and rebuilding a socio-economically equitable community. South of downtown, traffic could also be slowed and new street connections made in the Southside neighborhoods, a generally disadvantaged area that has been impacted by the highway.

In order to accomplish the goal of reconnecting neighborhoods, a critical decision must be made. That choice is to not designate the replacement road as a “Business Loop, Qualifying Highway.” The designation was proposed by New York State DOT at a meeting in early April, 2019, and it sounds innocent enough. The key words, however, are “qualifying highway.” That designation would drive design choices that will turn the Community Grid into a surface highway through downtown, which is what the renderings from the draft Environmental Impact Statement show (see below). Among the requirements are 12-foot lanes—the same width as an Interstate—larger curb-return radii (which means larger intersections), and a wider right of way, that will make the thoroughfare the wrong scale for Syracuse. Conversely, if Almond Avenue is not a “Business Loop, Qualifying Highway,” it can be built at an appropriate scale as a major city street that is still walkable and people-friendly.

“I believe that traffic calming—that is to say 30 mph design speed, 11-foot travel lanes, two lanes each direction with on-street parking, bike lanes, and trees on both sides—and maximum street width of 110-115 feet, are critical for the at-grade portion of the Community Grid,” says Bob Haley, an architect who served on the American Institute of Architects CNY I-81 task force, a community stakeholder requested by DOT. That section “should be a vibrant major city street, encouraging mixed-use development for the city's future. This portion of the Community Grid should not be designated and designed as a ‘Qualifying Highway,’ with all the larger design requirements this would entail.”

If Almond Avenue and its intersections are designed to be walkable and human-scale, conditions for redevelopment will be optimized. An analysis by AIA CNY task force shows that the city would acquire approximately 18 acres for new development in the public interest. For comparison, Rochester, New York, has already generated $229 million in development in just two years on only 6.5 acres acquired from filling in a portion of the Inner Loop highway—and that number will rise as more sites are built upon. Some of that development has produced affordable housing. Syracuse could do the same—but the land reclaimed and the benefits could be larger.

Moreover, that 18 acres is just the beginning—because that entire corridor may get new development that could benefit city neighborhoods and the region as a whole. “Some believe downtown will benefit and nobody else will,” Haley says. “That’s a myth. The whole region will benefit." The surrounding towns will benefit if the city is stronger as a cultural, economic, and social center. Currently, the corridor is flanked by parking lots, vacant lots, and automobile-oriented development. Intersections along this corridor could be significant locations for mixed-use development.

To guide that development, Haley believes that a new agency could be created along the lines of a development authority. The city, county, and state could be involved in such an organization, which would look at all of the parcels along the corridor. It may help to develop a plan with community guidance, looking at the needs of everyone living nearby, and giving assistance to immediate neighbors as required. Incentives could be provided to achieve the community vision—especially if the federal government participates.

Up to now, the NYS DOT has been the lead agency in the project, and the visions presented have more to do with traffic engineering than reconnecting neighborhoods and revitalizing the city. But Haley believes that building a true Community Grid is achievable if the city and county work together to promote that vision, eliciting help from the state and federal governments. But acting decisively is important, because the clock is ticking. Infrastructure decisions may soon be made that either enable, or impede, the city’s progress for generations to come.