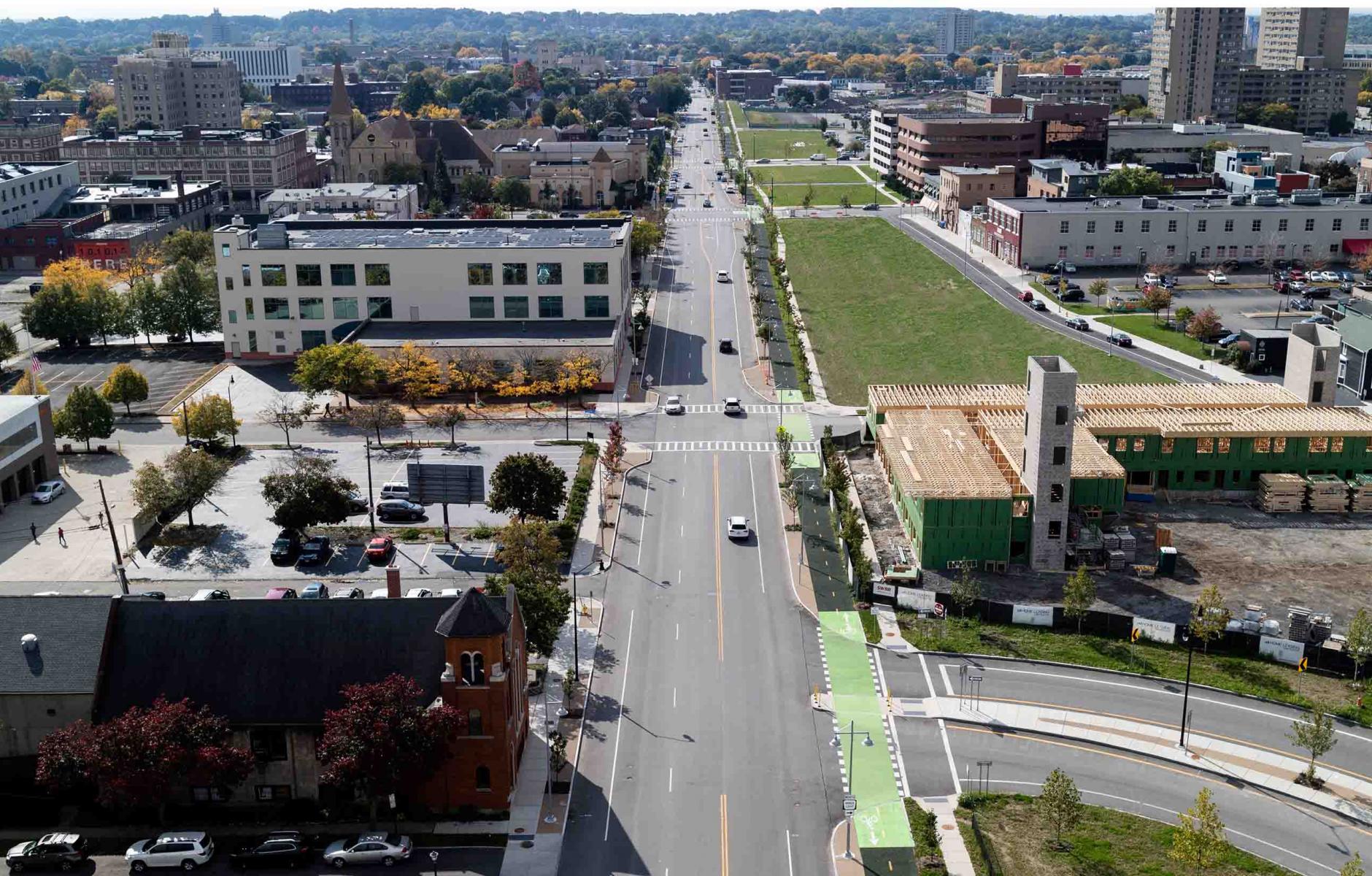 Four principles for a federal highways to boulevards program

For many Americans, controlled-access highways are a regular part of their daily landscape. They take these high-speed roads for granted, with little consideration of how they were built, the damage they have caused, and the massive amount of money and subsidies that are needed to support them. But the hard truth is that at least one million Americans, if not more, were forcibly moved through eminent domain seizures to build the Interstate highways we have today. Millions more Americans who live next to a highway still endure the noise, pollution, danger, and disinvestment caused by the road.

Last week, CNU released four principles essential for successful, community-focused highway removal. These principles can and should be incorporated into any program the federal government creates as well as any removals that local and state agencies undertake independent of a national initiative.

Too often, communities only have the opportunity to respond to a state DOT proposal to alter a highway, not create their own. Community feedback is solicited after alternatives have already been proposed, which limits the capacity for change and undervalues the lived experience of residents.

A federal Highways to Boulevards program should provide grant funding to community-based organizations to help gather meaningful input from residents and determine their visions for the future of a highway corridor, before the physical planning begins. The grassroots movements advocating for highway removal don’t have the financial capacity of a state DOT or even a municipal government. With this program, they can apply for these grants on their own and bring information and professional expertise from outside the normal channels of infrastructure development to build a community vision.

The program should also mandate that the community be involved in the entire conversion process to ensure follow through. This includes establishment of a community advisory board to oversee the project as it progresses.

Street designs that include cars but do not make them the highest priority are key: the test of time has shown that fewer lanes are adequate for auto traffic but can still be designed for people and bicycles, with well-proportioned sidewalks, frequent and well-signed crossings, street trees, and one or more medians that create a desirable and walkable avenue.

A federal Highways to Boulevards program should lay out a new set of metrics for state DOTs to promote this type of street design. Projects should have to reduce vehicle miles traveled (VMT) so that they will not replicate a highway’s environmental injustices. Multi-modal accessibility scores that combine transportation and land use data to evaluate the number of people who can easily access jobs and services in a project area should also be adopted. This ensures a corridor’s land uses are planned to work in tandem with its transportation systems and decenters planning for the automobile.

At its core, the Highways to Boulevards movement is more than just a transportation issue; it intersects with housing and affordability, economic development and access to jobs and services, environmental justice and public health, racial equity, and community development.

The program’s capital construction grants should be eligible to cover not only the removal of the highway, but the critical infrastructure that supports other forms of mobility. This should range from sidewalks and bike lanes all the way to public transportation like bus rapid transit with dedicated lanes. Unlike the highway, this infrastructure serves the community members in and around the highway corridor, who often lack these sorts of quality-of-life amenities.

In terms of what replaces a highway, a federal program should also incentivize projects that build amenities beyond transportation infrastructure. This will vary based on community needs; Highways to Boulevard projects have the power to transform the land occupied by the highway into a variety of housing types, green space, retail, and other services that a community lacks. These projects have the potential for development and investment that far outstrips the cost of removal. For example, Rochester, New York spent $22 million to fill in the Inner Loop and reclaim 6.5 acres of land from the highway, which has yielded $229 million in development over its first two years.

Investments in the built environment should be balanced with investments in people as well. A comprehensive federal Highways to Boulevards program will offer support to businesses that are community-oriented to help ensure the development of a complete neighborhood with a wide variety of services, amenities, and cultural institutions. It should leverage the expanding economic opportunities in the neighborhood by funding workforce development programs that serve local residents and train them for the jobs a Highways to Boulevards project brings with it in construction, transportation, and community development.

The removal of a highway will increase the attractiveness of nearby neighborhoods, and subsequently property values and rents may be expected to rise. In this scenario, lower-income families and individuals who currently live around a highway will find they can no longer afford to stay. The relocation of Interstate 880 in West Oakland and its replacement with the much more attractive Mandela Parkway serves as a case study, with a larger decrease in the long-time Black population (−28 percent) and increases in property values (184 percent) along Mandela Parkway, compared to West Oakland as a whole between 1990 and 2010. This should not be the outcome.

A portion of the funding made available through a robust federal Highways to Boulevards program should be put toward displacement protections that take effect before construction begins. Like the designs for what comes after the highway, there is no one-size-fits-all solution when it comes to combating displacement. Protections to keep current residents in their homes can include tax abatements for property owners, rent control and first-time homebuyer programs for tenants, and community land trusts to steer new development, but this short list is far from exhaustive. What is important is that the federal government encourages cities that initiate these projects to tackle displacement from the start and provide them with the means to do so.

Looking to the future

Over the last five years, the pace of highway removal has accelerated, with two projects completed, four underway, and two more committed. In this context, highway removal has become an increasingly important tool for community revitalization. But the benefits unlocked by taking down an expressway must be channeled to the members of the current community. As more and more state and local agencies take up these projects, it is essential that they achieve the best possible outcomes. The federal government can set an example and provide guidance by adopting a Highways to Boulevard program that espouses these four principles and centers legacy residents. A successful program will benefit municipalities and states through the economic empowerment of disinvested communities, not at their expense, like last century’s transportation infrastructure.