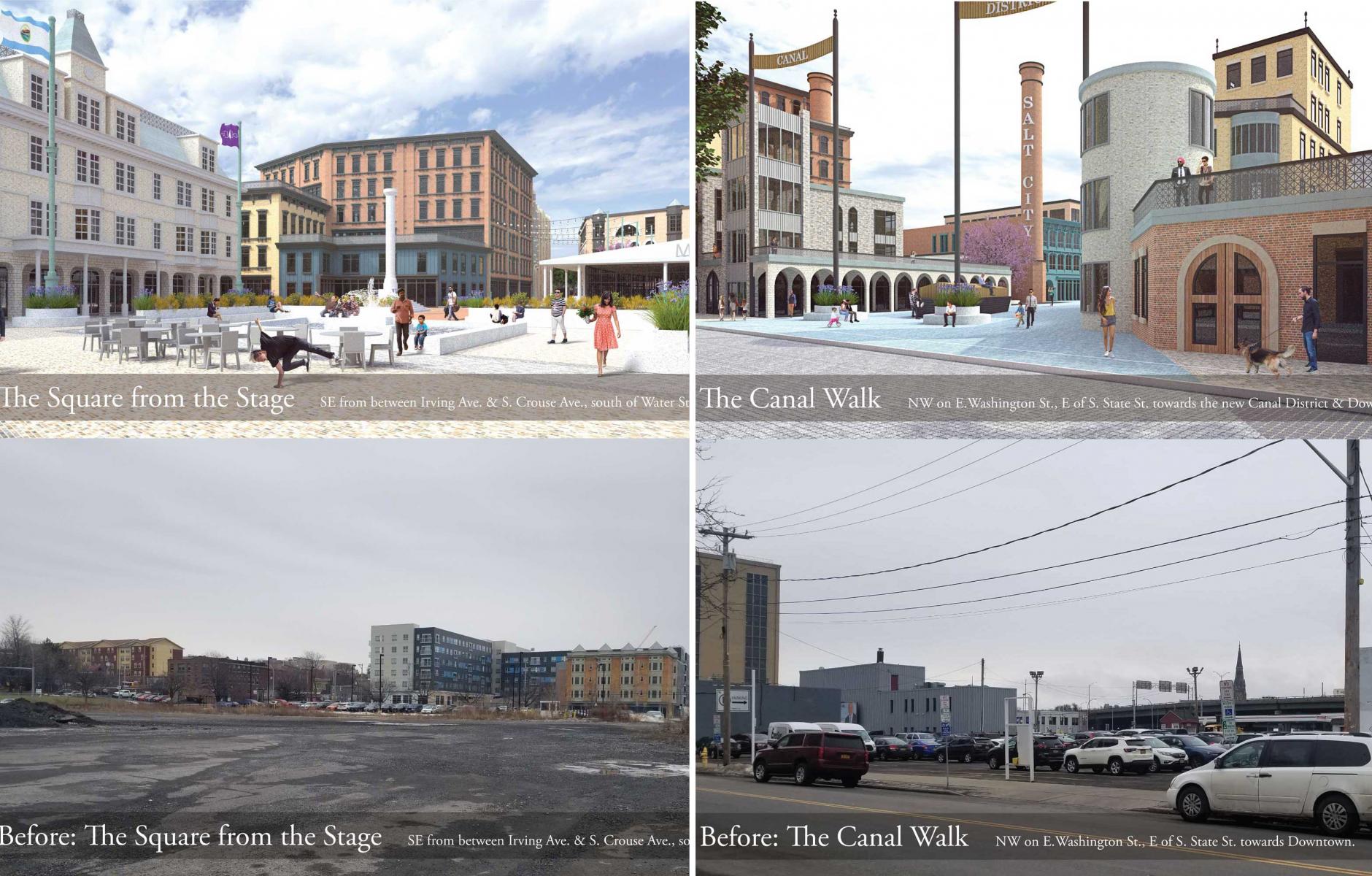 Before and after placemaking visions from Baxter Hankin, a recent Syracuse University graduate, for 15th Ward North.
Freeway transformation

A vision for Syracuse, after the I-81 viaduct

Syracuse and NYS Department of Transportation face difficult decisions with the replacement of the I-81 elevated highway through downtown, choices that will impact the city for generations to come. The highway, past due for reconstruction, will be replaced by something, starting as early as 2022.

The New York State DOT favors removing the existing I-81 viaduct and replacing it with a “community grid,” which implies reconnecting a network of urban-scale streets that existed before the Interstate was built in the late 1950s. The I-81 through traffic would be rerouted around the city center to an existing Interstate bypass.

Initial designs for the replacement road at street level are too wide—a trucking route through downtown that could still divide the city. Too little emphasis is placed on the opportunity to redevelop a largely vacant neighborhood into a mixed-use place that is sustainable and socioeconomically equitable.

Today, I share a vision by former Syracuse University architecture student Baxter Hankin (he graduated in 2020) that gets many things right about the opportunity for Syracuse. In a plan shared with CNU, Hankin shows part of the 15th Ward North area—now largely parking and vacant lots, with a few remaining historic buildings, divided by the highway—redeveloped into fine-grained urbanism. The work covers what was, in the middle of the 20th Century, a largely African-American and Jewish area, he reports. Here’s the plan.

Existing buildings are dark gray and retained in the new plan. New buildings, light gray, are shown built around the perimeter of each block, once again establishing streets as outdoor rooms and public spaces. The new buildings comprise a range of sizes, from very small to relatively large, allowing for an appealing mix of residential, commercial, and civic uses that could be built incrementally. The vision includes creative placemaking, with attractive renderings, and the streets are the right scale for Syracuse.

The point is not that this vision should be built exactly as rendered. That won’t happen, whatever the outcome. Student projects typically don't have the level of community input or basis in market research of professional or city sponsored plans. That said, the general idea is on target. At issue is the scale of the new thoroughfare that is built to replace the I-81 Viaduct, and the scale of connecting streets and blocks. The replacement thoroughfare should be an urban street, not a highway through the city. Trucks that are traveling past Syracuse, north to south or vice-versa, should use a new Interstate 81 route (now I-481), and not be encouraged by an overbuilt thoroughfare to drive through downtown. Local truck traffic serving the city should travel at slow speeds, not disrupting city life. Implementation of that vision will help Syracuse, socially and economically, for coming decades and generations.