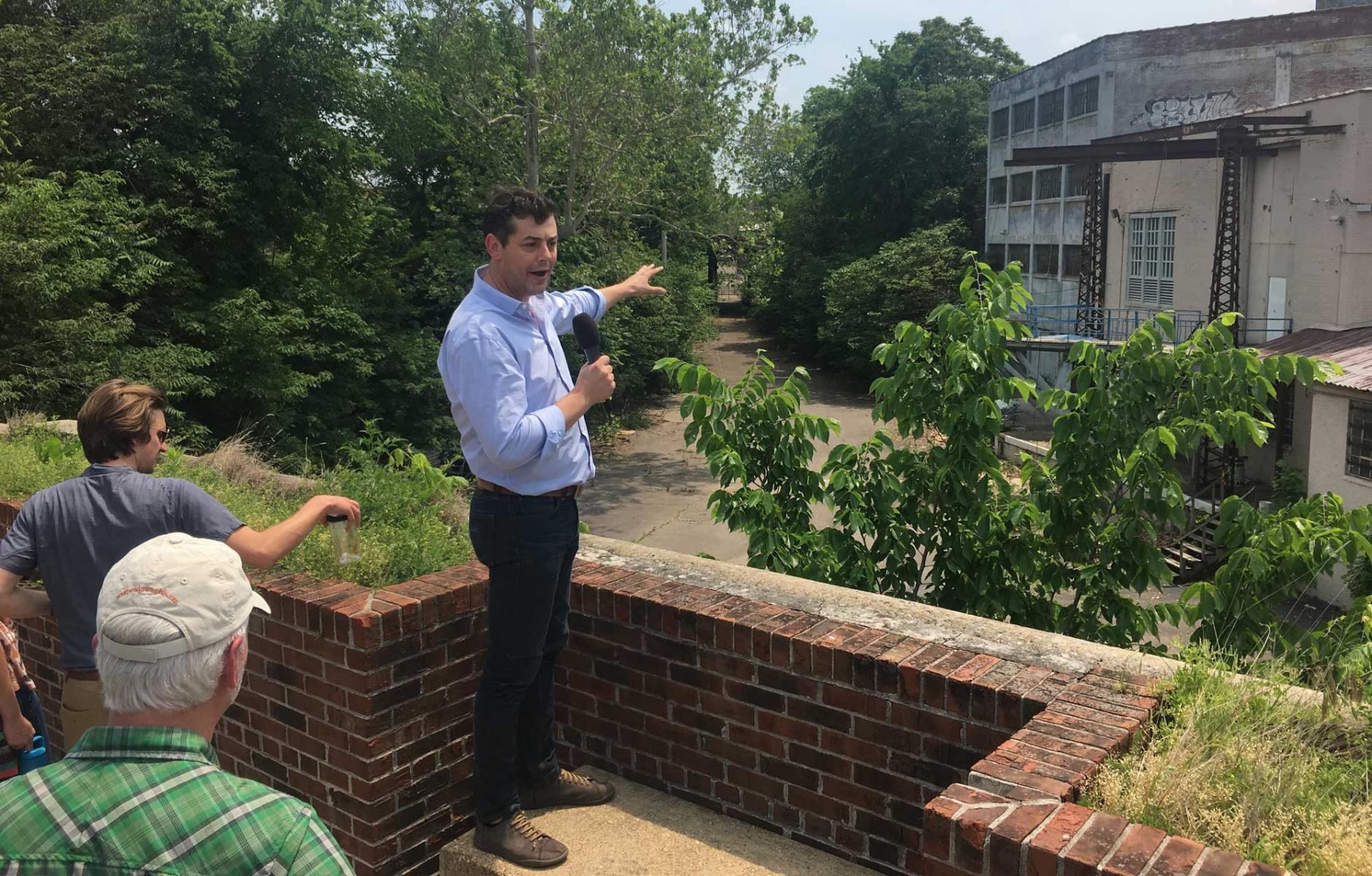 Tommy Pacello gives a tour of a redevelopment project in 2018. Photo courtesy of Nathan Norris.
Community

Tommy Pacello, passionate placemaker and a star of the New Urbanism at the peak of his abilities, died from complications due to pancreatic cancer on Monday. Pacello, 42, was president of the Memphis Medical District Collaborative (MMDC) and an active CNU member, serving on the board’s nomination committee for four years.

Pacello was a true urban innovator at MMDC, a nonprofit funded by seven anchor medical and educational institutions. MMDC sponsored a wide range of social and placemaking programs that have made a big impact on the 2.6-square-mile District since the organization was founded in 2014.

Despite the growth of the health industry, the District had suffered massive disinvestment over the last half century. Its population had declined by more than two-thirds. Pacello’s revitalization prescription included jump-starting real estate development, supporting local businesses, improving the public realm, hiring District residents, and encouraging more employees to live locally.

“Tommy was a larger-than-life figure who brought his remarkable passion and vision to help us all imagine a more vibrant and inclusive Memphis and Medical District. His leadership and friendship will be celebrated by all of us who knew him,” Abby Miller, Executive Vice President, MMDC.

I talked with Pacello a little over a month ago, interviewing him for an update on what the MMDC was doing during the pandemic. As usual, he was multitasking, ordering lunch at the counter while giving me clear, quotable responses on the phone. Of all new urbanists, he was one of the most quotable. There was almost no fluff to his answers.

His leadership this year, during the pandemic, in a year when he was diagnosed with terminal cancer, is an inspiration. The collaborative’s 2020 activities have included a Small Business Emergency Assistant Fund, streetscape improvements, planning for a bus rapid transit and a streetcar line through the District, a range of development assistance, jobs programs, and adapting its “Clean and Green” program to the pandemic.

Focus on the public realm

Pacello was an innovator in transforming streetscapes and complete streets. Although the District is adjacent to downtown, much of the urban environment became automobile-oriented, visually and functionally, since the middle of the 20thCentury. An overabundance of surface parking, gates, drive-throughs, and fences mar the streets. The streets themselves were designed for fast-moving through traffic, making life difficult and unsafe for those on foot or bicycle.

Faced with such a large number of streetscapes that needed fixing, Pacello adopted a Tactical Urbanism, “Quick Build” approach. MMDC worked with the city’s repaving program to plan and implement traffic calming and complete streets using new surface materials, street furniture, planters, bollards, and other semi-permanent changes. MMDC completed 13 streetscape improvements in recent years and several more in 2020—a record that I have not seem matched in any similar sized place elsewhere. Street redesigns were combined with nearly 20 placemaking interventions to make a real difference in the District’s public realm. “I really think what they have done with the streetscapes has probably yielded the most change in the neighborhood,” notes one planning partner in a report by Democracy Collaborative and Innovate Memphis.

Pacello was an innovator in promoting incremental development and rehabilitation of vacant and underutilized buildings. Because the City of Memphis is a slow market, MMDC uses equity and debt investments strategically to promote projects that otherwise would not obtain capital from private lenders. On the equity side, MMDC acquires historic buildings and parcels with significant potential—but that may not be ready for development today.

Pacello’s vision combines these new urban revitalization ideas with a strong social equity focus, using the economic power of the anchor institutions to invest, buy, and hire locally. MMDC is a model for medical districts in cities and towns all across the US.

Pacello’s too-short career was impressive. He had degrees in business administration, land-use planning, and law. He was a Memphis Assistant City Attorney and worked for the land-use regulatory firm Code Studio, the Mayor’s Institute for Excellence in Government, and U3 Advisors (in that position he helped launched the MMDC). His LinkedIn page notes that he is Chair for the Memphis Chapter of the Urban Land Institute and a Commissioner with the Memphis Area Transit Authority.

“Tommy was wicked smart, incredibly generous, remarkably humble, a rare talent at bringing people together for the betterment of the community, and he knew how to get things done,” notes Nathan Norris, founding principal of CityBuilding Partnership. “I wish luck to Memphis. They will not be able to replace him, but he inspired many people who will be able to build upon his work.”

For those who want to read more, check out this obituary. From the obituary:

The family requests in lieu of flowers that friends support Tommy’s dearest causes and work or make a non-tax-deductible gift to the Pacello Family Educational Trust for the benefit of future educational pursuits of his young daughters, Colette and Cecile.